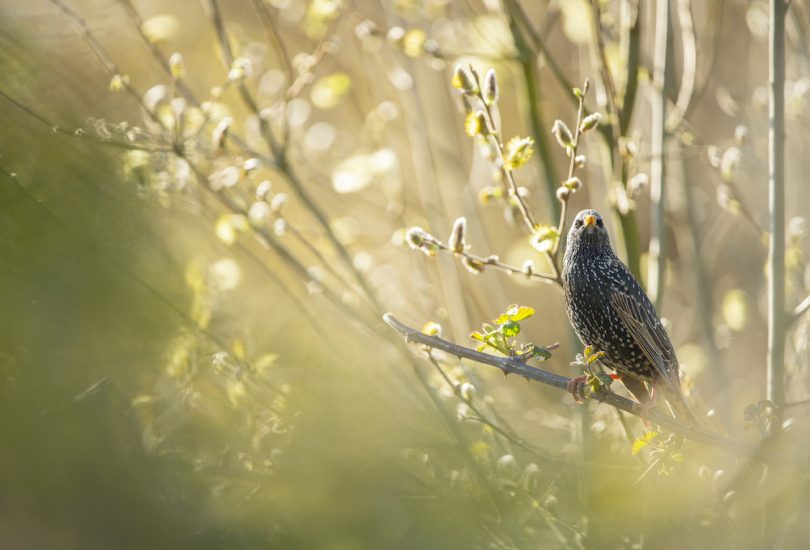 A more strategic approach to wildlife-friendly farming schemes is required to recover England’s farmland bird populations, according to a new study led by the RSPB.

A new paper published today in the Journal of Applied Ecology, with support from the BTO and funding from Natural England, monitored how farmland bird populations responded to different levels of agri-environment schemes in arable, pastoral and mixed farming landscapes.

The UK government has recently introduced a legally binding target to halt species abundance declines in England by 2030, with similar timebound EU targets currently under discussion. With many of our previously common farmland birds such as Starlings and Skylarks in steep decline, there is a pressing need to rapidly implement effective conservation interventions across the farmed landscape, including through the new Environmental Land Management Schemes currently being developed and piloted in England.

This ten-year study measured changes in the abundance of farmland birds on land managed under bird-focused lower- and higher-tier agri-environment schemes, as well as land no bird-friendly farming initiatives.

Under the higher-tier scheme, an average of 11% of the farm was devoted to bird-friendly measures, whereas <4% was managed under the lower-tier schemes. The authors specifically studied bird-friendly measures that provide seed-rich habitat for winter foraging, insect-rich habitat for feeding chicks, and nesting habitat for ground nesting species such as Lapwing. Higher-tier farms also received bespoke one-to-one management advice prior to the start of their agreements.

The results showed that when approximately 10% of a farm was devoted to bird-friendly farming practices under the higher-tier scheme, this benefitted over half of the farmland bird species in two of the three study regions. Although lower-tier provision generally failed to increase bird numbers, it helped to sustain populations of some species, which continued to decline in the absence of agri-environment support elsewhere.

The second part of the study asked what proportion of the farmed landscape would need to be placed into higher-tier agreements to recover farmland birds by 10% over ten years. The answer was similar in the two regions – 26% in the pastoral West Midlands and 31% in arable East Anglia.

However, by targeting higher-tier agreements to farms that already hold higher numbers of priority farmland birds, this requirement drops to 17% and 21% respectively, which represents a significant cost saving. This is the first study to shed light on the amount of nature friendly farming that might be required to recover farmland birds at a landscape scale.

RSPB Conservation Scientist and lead author of the study Dr Rob Hawkes said: “This is the first study to ask the question – how much nature-friendly farming is needed in the English landscape to recover our depleted farmland bird populations? Agri-environment schemes can only recover farmland birds if sufficient bird-friendly habitat is provided at both the farm and landscape scales. There needs to be better, more strategic, thinking when agreeing these nature-friendly packages.”

The study cautioned that some species with specialist requirements, like the Turtle Dove, will need specific tailored habitat management that is carefully targeted to the sites where the species is still hanging on. The generic bird-friendly measures tested in this study had no discernible benefits for this species.

Alice Groom, RSPB Senior Policy Officer said: “This research has landed as Governments from the four UK countries develop new agricultural policies to replace the EU’s Common Agricultural Policy. This provides a critical opportunity to design future agri-environment schemes that are effective and deployed at a sufficient scale to recover farmland wildlife.

“Welsh Government have proposed making the 10% farm scale provision a universal element of the Sustainable Farming Scheme. In England, Defra has yet to set out how they will ensure the new Environmental Land Management scheme (ELM) contributes to the new legally binding targets to halt the loss of species abundance by 2030 and reverse it by 2042.”

Whilst the study only reviewed the impact of bird-friendly farming initiatives on farmland bird populations, the authors suggest that these, and other wildlife-friendly schemes will benefit more than just wildlife. Nature underpins our ability to produce food and can provide food-sustaining ecosystem services like clean water and better soils. Simply put, nature can improve the resilience of the farming sector.