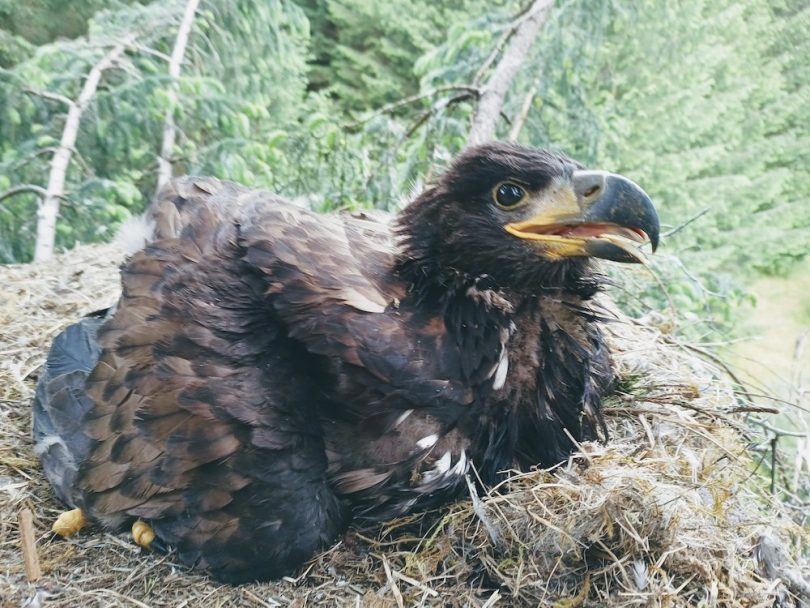 A pair of white-tailed eagles on Mull have recently celebrated their 25th anniversary by successfully fledging their 25th chick.

Skye and Frisa are the UK’s oldest known white-tailed eagle pair at 28 and 30 years old respectively. They paired up in 1997 and had their first chick the following year, before becoming household names in 2005 with their televised debut on the first ever episode of BBC’s Springwatch.

Since then, they’ve appeared on numerous other programmes including Countryfile, The One Show and Springwatch spin-offs Autumnwatch and Winterwatch. In 2008, their chicks Mara and Breagha were filmed by Gordon Buchanan and featured on Springwatch as the first white-tailed eagles in the UK to be satellite tagged. This allowed the public to follow their movements online and Mara became the first UK white-tailed eagle to be tracked from chick right through to his first nesting as an adult.

White-tailed eagles were driven to extinction in the UK in the early 20th century, before re-introduction programmes beginning in 1975 helped re-establish the population. There are now estimated to be at least 150 pairs across Scotland, with much of this recovery being driven by Skye and Frisa.

The pair’s newest chick – thought to be a female – is the latest in a white-tailed eagle dynasty. In 1985, Frisa’s mother, Blondie, became the first eagle to successfully hatch a chick in Scotland following the re-introduction. Moreover, one of their descendants, Finn, has been featured on live cameras at RSPB Scotland’s Loch Garten Nature Centre in the Cairngorms this year, fledging two chicks with his partner, Shona.

RSPB Mull Officer Dave Sexton said “What an incredible achievement for Skye and Frisa after 25 years together. Their 25th chick is now out of the nest and well on her way to independence after a few more months of care from her hard-working parents. I love the family connections right back to Blondie and now right up to date with Finn and Shona in the Cairngorms.”

Also known as sea eagles, white-tailed eagles are the UK’s largest bird of prey with a wingspan of 2.5 metres. Their distinctive, broad shape in flight has led to them being nicknamed ‘flying barn doors’.

A recent study highlighted the economic benefits the birds have brought to Mull, with between £4.9million and £8million of tourist spend being attracted by white-tailed eagles annually, which in turn supports up to 160 jobs.

Dave added, “Skye and Frisa have been great ambassadors for their species having been watched and enjoyed at Mull Eagle Watch and via their star appearances on TV. They’ve been especially helped over all these years by Forestry and Land Scotland who have carefully managed their forest home around them. Skye and Frisa have been a massive part of my daily life on Mull and they’re like old friends now. They lift my spirits every time I see them.”

For the latest updates on how Skye, Frisa and their family are faring, you can follow @MullEagleWatch and @skyeandfrisa on Twitter.