Home » On the ‘elevator to extinction’: arctic-alpine plants endangered in Scottish Highlands 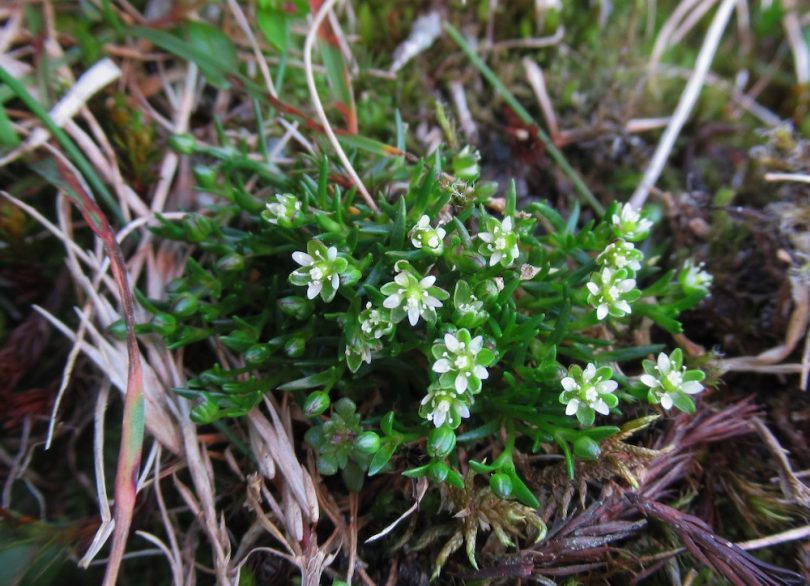 Rare arctic-alpine plants are being driven higher up Scotland’s mountains by climate change and will soon become extinct if we don’t intervene, new research from the University of Stirling has found.

Snow pearlwort, drooping saxifrage and mountain sandwort, which all enjoy a cool climate at high altitude, are retreating up the slopes of the Ben Lawers range in the Highlands.

The rate of decline of snow pearlwort – 66% since the mid-1990s – has led to it being moved from ‘vulnerable’ to ‘endangered’ conservation threat status by the Botanical Society of Britain and Ireland (BSBI). It is the first ‘vascular’ plant – a grouping that includes flowering plants and ferns – to become endangered due to climate change, the BSBI said. The study found that drooping saxifrage and mountain sandwort have both declined by over 50 per cent.

Sarah Watts, a PhD researcher from the University of Stirling’s Faculty of Natural Sciences and a former seasonal ecologist with the National Trust for Scotland (NTS), has spent 12 years monitoring 10 rare species growing on Ben Lawers alongside NTS staff and volunteers, adding to a data set that goes back 40 years.

Miss Watts said: “Our research signals a rapid loss of biodiversity happening right now which means that, if it’s allowed to continue on this accelerated trajectory, due to climate change, we will see the extinction of species like these.

“What we are seeing here is range contraction – where species that grow in cold places, in the north and at high altitude, are moving further north and higher up the mountain. But at some point, they’ll have no further to go and will disappear. For example, drooping saxifrage is now only found 50 metres from the top of Ben Lawers.”

Miss Watts said the global rise in temperature due to climate change had led to lowland species colonising upland areas and outcompeting the mountain plants, reducing the area they can grow in. And loss of snow cover due to climate change has also removed plants’ protection from freeze-thaws, which cause land slip and rock fall, destabilising the arctic-alpine habitat.

Professor Alistair Jump, Dean of the Faculty of Natural Sciences and Head of the Global Change Ecology Research Group at the University of Stirling, said: “In the context of the interacting climate change and biodiversity crises, this research has worrying global implications. It shows that low-latitude arctic-alpine plant populations already situated at maximum local elevations are effectively on the elevator to extinction: we face their loss from our mountains because there is no higher ground left for them to retreat to as temperatures continue to rise.

“The declining mountain flora we have studied functions as a canary in the coal mine for escalating climate change and indicates broader threats to biodiversity in the coming decades.”

At 1,214 metres, Ben Lawers is the 10th highest peak in Britain and is rich in alkaline soils, which makes it a haven for rare plants.

Miss Watts said: “Ben Lawers is the most southerly site in Europe where snow pearlwort grows, and the only one in Britain. Elsewhere, it’s found in the Arctic and in northern Scandinavia, in places like Svalbard.

“Mountain outpost sites such as Ben Lawers, at the edge of the global range of arctic-alpine plants, are unique biodiversity hotspots. These plants have high cultural and inspirational value, and may have unique genetic variations which will be lost forever when they go.”

However, she has some suggestions, as to how the species could be preserved.

“Development of ex-situ plant conservation collections of these threatened species, in collaboration with expert horticulturalists working at botanical gardens, will be of critical importance for preserving the Scottish Highland populations before they become extinct in the wild.

“These collections would also allow us to conduct further research into the factors affecting the plants’ survival or decline, and could be used for translocations and assisted migrations to more suitable mountain habitat in the future.”

The paper Riding the elevator to extinction: Disjunct arctic-alpine plants of open habitats decline as their more competitive neighbours expand is published in the journal Biological Conservation.