Home » Lost gold: Should we be worried about losing crucian carp from UK freshwaters? 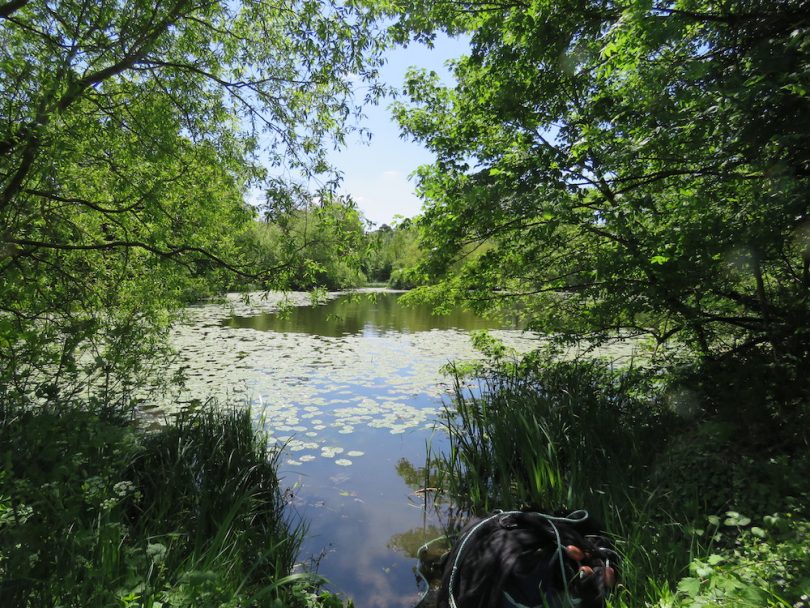 In UK freshwater habitats, there are just over forty different species of fish considered to be native (Freshwater Habitats Trust, 2022). There are also several species which regularly, or occasionally, migrate between our freshwater, estuarine and marine habitats.

Our freshwater habitats, and the species occupying them, are under threat from many different factors including pollution, over abstraction, physical modification of habitats, climate change and invasive non-native species (INNS). Physical habitat modifications and pollution prevent fish having access to important functional habitats such as spawning or refuge areas, and abstraction can exacerbate these impacts. INNS can affect native fish species in a variety of ways, including competing for resources and space, introducing and spreading diseases, and predating native species or their eggs. In some cases, they can also hybridise with native species, resulting in an abundance of offspring that compete with pure-strain individuals and are often infertile.

The crucian carp (Carassius carassius), or crucian, is a moderate-size species of fish that can be found in small ponds, larger eutrophic lakes, canals and in some slower-flowing, lowland rivers. It is a shy species typically preferring macrophyte (aquatic plant) dominated systems, where it lives in small shoals feeding on a variety of aquatic life.

The crucian (Figure 1) is broadly similar in shape to its goldfish cousin (Carassius auratus), but is a buttery gold colour on its flanks, darkening towards its dorsal surface and lightening in colour on its belly. The tail and pectoral fins can appear orangey in younger specimens but typically become darker brown or almost black in appearance in older fish. A typical adult fish would not measure more than 45 cm (typically 20–45 cm), and the largest specimen caught by an angler in the UK weighed a little under 2.6 kg (Maitland, 2000).

In the UK, crucians usually spawn during the late spring and early summer. Spawning takes place in shallow water, which warms quicker, usually among dense, fine-leaved macrophytes. Eggs take about a week to hatch, and the young fish (Figure 2) then take up to four years to reach sexual maturity (Maitland, 2000).

The crucian is a cyprinid fish species closely related to goldfish and other carp species including the common or king carp (Cyprinus carpio) (Figure 3) and the Prussian or gibel carp (Carassius gibelio). It is generally considered to be native to the UK, although there has been some debate around this. Jefferies et al. (2017) used molecular studies to demonstrate that the strains of crucians found in UK populations probably arrived here from continental Europe during the 15th century, meaning they must have been transported by people. Should they therefore be considered native to the UK, and should we be concerned about conserving UK populations?

Although crucians are almost certainly an introduced species, they have nevertheless been a part of the UK’s biota for a considerable amount of time. They are not known to have any detrimental impact on native wildlife and their preferred habitat is macrophyte-rich ponds (Figure 4: article main image) and small lakes (Sayer et al., 2020), habitats of notable conservation interest. The species has also long been popular with anglers and has appeared in many writings on angling and zoology during the past 300 years or so, thereby providing good reasons for it to be considered an English heritage species (Jefferies et al., 2017). The fact that populations of crucian carp appear to be in decline in the UK and throughout the whole of the species’ natural range also provides evidence that it should not be considered an invasive species.

Although pollution and habitat loss or modification are undoubtedly contributing to the decline of crucian throughout their known range, it is likely that one of the biggest threats to their future is competition from and hybridisation with other non-native and invasive species such as goldfish, carp and gibel carp. Goldfish and carp have been stocked in many stillwaters for angling or ornamental or aesthetic purposes, and many have escaped or been illegally introduced. The spread of these two species is unlikely to halt in the near future. On the continent, gibel carp are also becoming increasingly widespread and there are fears that it is only a matter of time before they arrive in the UK and establish populations.

Given that a significant focus of conservation is to preserve biodiversity, the decline in crucian populations throughout their natural range should be a cause for concern, and conservation efforts to preserve the species should be encouraged (Figure 5). The apparent lack of invasiveness shown by UK populations of crucians, its preference for priority conservation habitats and the fact that a significant threat (gibel carp) is not yet established in the UK provide a strong argument that the UK should look to protect known populations of this species.

A useful starting place for more information on crucian carp and conservation efforts in the UK is the website www.crucians.org/.

Dr Peter Walker is an Associate Director and Aquatic Consultant working for RSK Biocensus Ltd. He has published multiple articles on aquatic ecology related topics and is a recognised specialist in aquatic ecological consultancy. Peter can be contacted via email at peter.walker@rskbiocensus.com.

Figure legends
Figure 1. A relatively large and rather old-looking crucian from an Oxfordshire reservoir.
Figure 2. A small, juvenile crucian.
Figure 3. The author with a large carp (Cyprinus carpio) from an Oxfordshire reservoir.
Figure 4 (article main image). A shallow, eutrophic pond with abundant macrophytes – perfect crucian habitat.
Figure 5. The author, with an Environment Agency fisheries technical specialist, releasing juvenile crucians into an isolated pond with no existing fish stocks to create an ‘Ark site’ in Oxfordshire.