Home » Introducing Argulus – one of the smaller crustaceans inhabiting our freshwaters 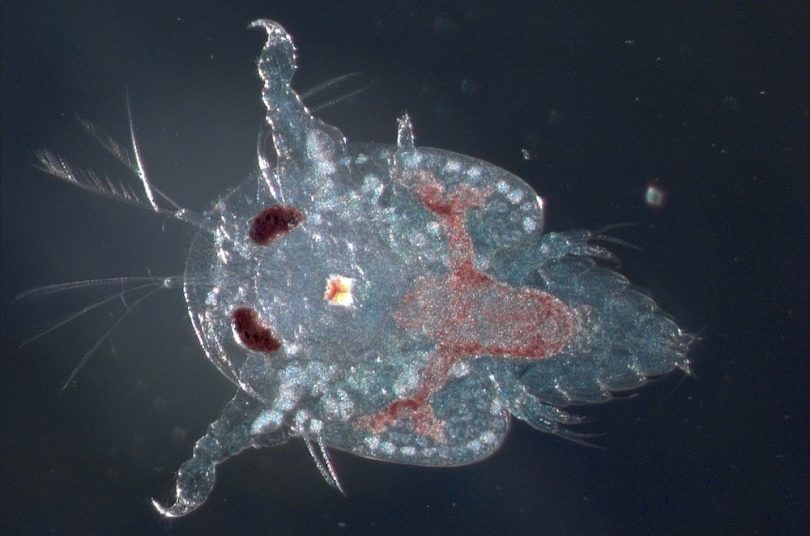 I first came across Argulus fish lice while fishing during my teens. I subsequently studied them for an A-level research project, my MRes dissertation and then spent five years in the Netherlands researching the species, resulting in a PhD thesis and several peer-reviewed articles (Walker, 2008a). Recently, Argulus has hit the headlines within the fish world owing to the discovery of a new, non-native species in the UK (Sikh Harris, 2021). In this brief article, I describe the ecology of Argulus sp. including some of the original findings from my PhD research.

The freshwater fish lice from the genus Argulus are a group of small crustacean species that are all parasitic on fish (Figure 1). They can survive for extended periods off their host fish (Walker, 2011a) and, consequently, occasionally appear in macroinvertebrate (Figure 2) and zooplankton samples, but they must feed on fish to survive.

Until recently, there were only three species of Argulus typically found in UK freshwaters: the native Argulus foliaceus and Argulus coregoni, and a non-native, invasive species, Argulus japonicus (Walker et al., 2004). Argulus coregoni is typically only found in rivers, whereas the other two species can be found in any freshwater environment but exhibit a preference for stillwaters, canals and slower flowing rivers. Fish health specialists have recently discovered isolated outbreaks of a fourth species, Argulus mongolianus, which appears to exhibit high potential for future spread, thereby posing an additional risk to native wild fish communities and farmed fish stocks (Sikh Harris, 2021).

Argulus sp. found in the UK typically lay their eggs on underwater hard surfaces such as stones, tree roots, woody debris or plant stems and leaves. During my PhD studies in the Netherlands, I maintained cultures of Argulus in aquaria where they laid their eggs on filter piping and stones as well as the glass walls of the aquaria in which they were housed. Eggs take several weeks to hatch and the total development time is dependent on the ambient temperature. Some eggs will lay dormant during winter months, subsequently hatching in large numbers during the spring.

Newly hatched, larval argulids (Figure 3 – main image) have a small amount of a yolk-like substance in their guts, but this is depleted quite quickly and the young lice will starve if they do not find a host fish within a few days (Walker, 2011a). When they have attached to a host fish, they possess various body adaptations that enable them to stay firmly in place or to scuttle over the surface of their host to find new feeding areas. Although the diet of very young argulids is still uncertain, adult lice feed on blood (Walker, 2011b; Figure 4).

Argulus sp. are not host specific and have been found on nearly all species and sizes of fish found in UK freshwaters, from brown trout to gudgeon (Walker et al., 2004, 2008a,b). They are, however, found only infrequently on European eels and I am unaware of any records of them on lampreys.

The fish lice damage their host fish in a variety of ways. During feeding, direct damage to the host’s skin is caused by the lice chewing and scraping holes as they try to access the blood beneath (Walker et al., 2011b). Indirect effects on host fish include stress; in severe infestations, this can lead to the fish’s immune response being compromised, although an inflammatory response is usually observed (Forlenza et al., 2008; Walker et al., 2011b). Heavily infested and/or stressed fish can also become lethargic and show a reluctance to feed resulting in a loss in overall condition. Worryingly, Argulus parasites have also been shown to act as vectors for other pathogens including various bacteria, nematodes and the notifiable spring viraemia of carp virus.

Dr Peter Walker is an Associate Director and Aquatic Consultant working for RSK Biocensus Ltd. He has published several scientific articles on fish health topics and completed his doctoral research on Argulus. Peter can be contacted via email at peter.walker@rskbiocensus.com.