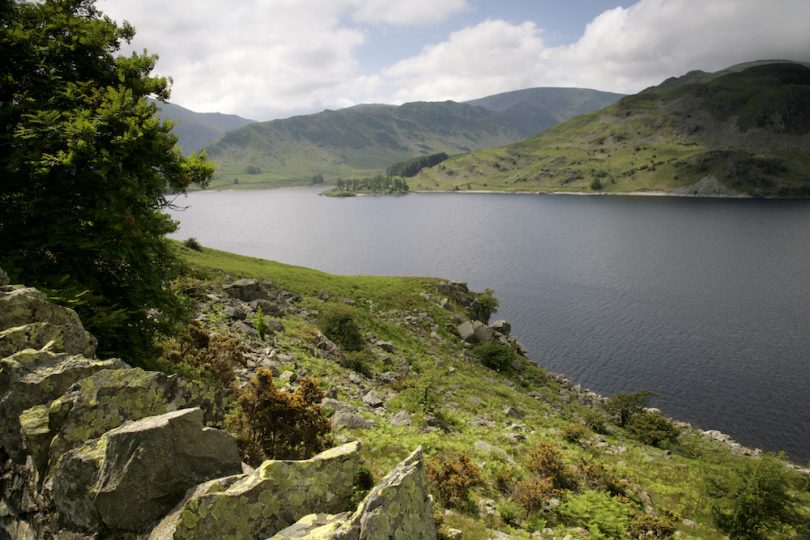 In 2015, the last golden eagle in England died at Haweswater in the Lake District National Park. His death was the latest in a series of losses in the Lake District spanning centuries of deforestation, draining of peatland, canalisation of rivers and overgrazing by livestock, leaving the landscape a ghost of its former self. In his book, Wild Fell¸ to be published by Doubleday on 24 February 2022, RSPB Haweswater Site Manager Lee Schofield leads a call to revive the landscape – detailing the ups and downs of taking over the management of two hill farms in 2012 and revealing how his team are combining ancient practices with new ambition so that farming and nature can thrive, and that one day eagles may soar once again.

In their efforts to restore their wedge of the Lake District, Lee and his team, working alongside landowner United Utilities, have rewiggled a previously straightened river, scoured old maps to find and resurrect lost wetlands, and equipped cattle with invisible GPS collars to protect patches of endangered wildflowers. As well as bolstering wildlife, this also provides benefits to people – there are twice as many people working at Haweswater than a decade ago, thousands of tonnes of carbon are being locked away in new woodlands and restored wetlands, and rewiggling the river has added 180m to its length, slowing the flow of water and reducing flood risk. By restoring the habitats in the area, it will also ultimately help improve the raw water quality in the reservoir at Haweswater that provides water for more than two million people across North West England.

Lee travelled across Europe looking for inspiration – from the wild fells of Norway to the pristine meadows of the Alps, learning from farmers and ecologists, but mostly from the land itself to discover how to breathe life back in the uplands.

England’s uplands and National Parks are full of communities with proud traditions, and it was the Lake District’s cultural legacy that earned it World Heritage Site status in 2017. Some see rewilding and ecological restoration practices as being at odds with the cherished farming practices that underpin this designation. In Wild Fell, Lee recounts with poignant clarity the tension this can create from first-hand experience.

Wild Fell’s depictions of a community grappling with an uncertain future for the Lake District comes at a pivotal moment. A Defra consultation, open until 15 April, is asking for input into new legislation for protected areas, building on Julian Glover’s 2019 review into England’s National Parks and Areas of Natural Beauty.

Lee said: “Change is possible, but we can’t rely on reserves as lifeboats for nature – we need large-scale transformation with people and wildlife at the heart of every decision made up and down this country. Wild Fell is not intended to be an instruction manual, and there’s never a one-size-fits-all solution, but I hope it can serve as an example of what can happen when conservationists, farmers and local people work together to fight for our wildlife and our livelihoods.”

Isabella Tree, author of Wilding: The Return of Nature to a British Farm, said of Wild Fell: “A thrilling, inspiring journey into the restoration of our uplands. Reasoned, intelligent, compassionate, well-informed, this is a story of hope and renewal for both nature and farming.”

Wild Fell can be purchased from all major retailers as well as all local stores: https://smarturl.it/WildFell.