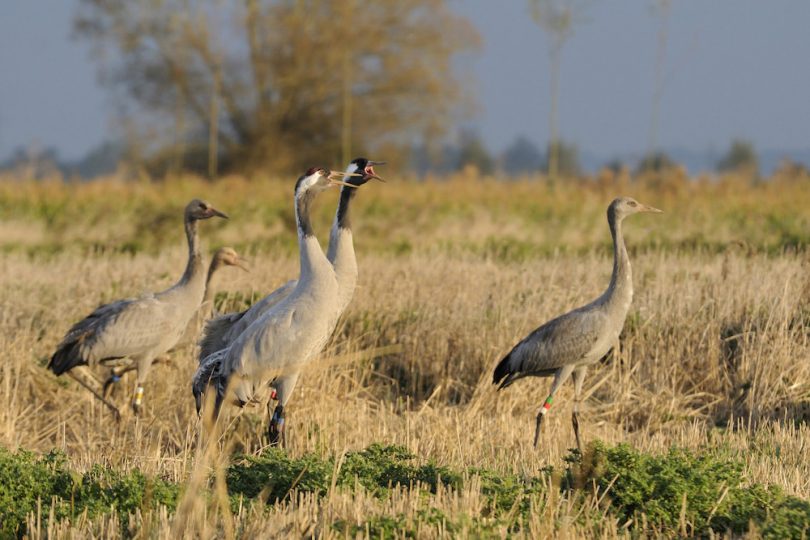 The common crane continues its comeback after the latest breeding survey reveals a record breaking 72 pairs across the UK in 2021. This is its highest number since cranes returned in 1979 after becoming extinct in the 1600s.

Of these 72 pairs, up to 65 pairs bred and these fledged an incredible 40 chicks, significantly adding to the UK population. The highest number of young fledged previously was 26 in 2019.

The concerted conservation effort on peatland restoration and wetland protection has significantly contributed to this recovery and nature reserves have played a vital role. Over 80% of the breeding population are found on protected sites, with 26 pairs on RSPB reserves alone. The total population is now believed to be over 200 birds – a new record.

Wild cranes were once widespread, before becoming extinct through hunting and the loss of their favoured wetland habitat 400 years earlier. In 1979, a small number of wild birds returned to the UK and colonised a small area of the Norfolk Broads before spreading to other areas of eastern England and elsewhere in the UK. The creation and improvement of their favoured habitat at RSPB Lakenheath and RSPB Nene Washes significantly aided this initial spread.

In 2010, the Great Crane Project – a partnership between the RSPB, WWT and the Pensthorpe Conservation Trust, and funded by Viridor Credits Environmental Company – gave the population a boost. By creating and improving existing habitat and carefully hand-rearing young birds, the project released healthy numbers of cranes on the Somerset Levels and Moors.

Standing at a height of 4ft, the UK’s tallest bird is also known for its graceful mating dance. When a pair comes together to start the breeding season, they reinforce their bond with an energetic dance of head bobbing, bows and pirouettes.

Cranes are naturally secretive during this period and can be difficult to spot, however they can be seen on RSPB reserves West Sedgemoor, Lakenheath, Nene Washes and Loch of Strathbeg.

February 2nd marks World Wetlands Day, and this positive news shows that conservation action can make a real difference. For this expansion to continue, we need to better protect existing sites and look to creating and maintaining others.

Damon Bridge, Chair of the UK Crane Working Group said: “The crane population is rapidly expanding.  Although climate change poses a huge challenge for many species – opportunities to restore peatlands and floodplains to reduce carbon emissions and better manage increased flood risk can go hand in hand with the delivery of habitats perfect for cranes and other wetlands species.

“Implementing these nature based solutions also bring opportunities for new sources of income to landowners, farmers and local communities via a mix of government subsidy, private investment in ecosystem services, and a growth in nature tourism and related business.”

Andrew Stanbury, RSPB Conservation Scientist said “Last December saw the publication of the new UK Red list for Birds. Its finding were stark; more of our bird populations are in trouble. We need to act now if these declines are too reversed. The recovery of the UK crane population, now at its highest level since the 17th century, showcases that conservation action can make a real difference.”

Norfolk Wildlife Trust’s John Blackburn, Reserves Manager at Hickling Broad and Marshes, said: “We are delighted with the news of this record number of breeding crane and proud that NWT reserves were instrumental in the crane’s early breeding success. The population is still growing in the Norfolk Broads, and NWT’s Hickling Broad reserve alone boasts a possible eight breeding pairs.’ He continued, ‘We are also seeing record numbers of crane at our winter roost site at Stubb Mill, with occasional counts of over seventy birds. This remains the best place in the country to see the spectacular sight of these magnificent birds.”

Chrissie Kelley, Pensthorpe Conservation Trust’s Head Of Species Management, said “It is fantastic to hear of the continuing success story of crane conservation in the UK and the vital role that the Great Crane Project has played. As a flagship species for wetland conservation and restoration, the efforts to restore crane numbers will also have a lasting benefit for so many other species, which rely on this important habitat.”