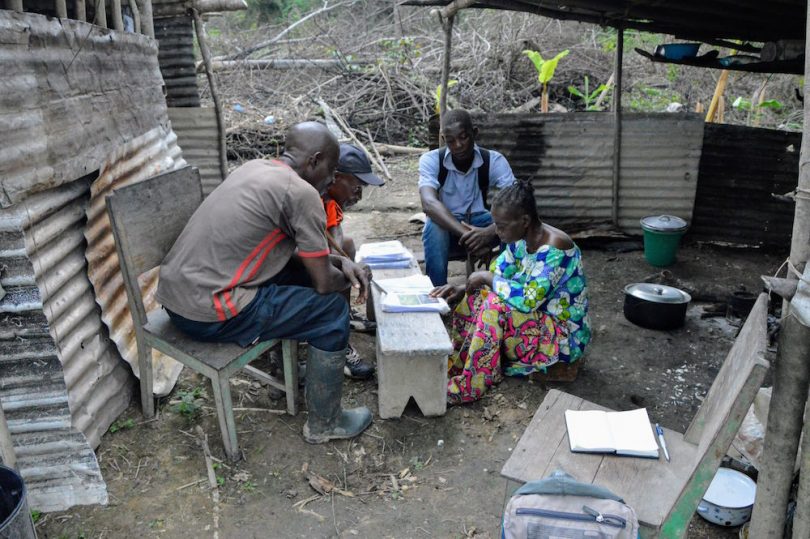 A study has found that indigenous people in the rainforests of Gabon have knowledge of plant and fruit-eating animal interactions that exceeds that found in academic literature.

These preliminary results will be presented at Ecology Across Borders on 13 December by Clémentine Durand-Bessart, a PhD researcher at Biogéosciences Université de Bourgogne and Centre d’Écologie et des Sciences de la Conservation, France.

The study, which interviewed a community of indigenous people in Doussala, Gabon, found that, on average, people knew of an astonishing 732 different plant and fruit-eating animal (frugivore) interactions, with some able to identify as many as 2700 interactions. This knowledge covered 100 frugivores from elephants to bats and 286 plant species.

When comparing local knowledge with academic literature, the researchers found that 34% of interactions were known only to local people, compared to 22% of interactions which were unique to academic sources. 44% were shared between both.

Clémentine Durand-Bessart said: “Comparing knowledge from local people with academic knowledge from literature, we found that even though many interactions were known by both, local people were the most knowledgeable. In our two months of fieldwork in Doussala, we obtained as much, if not more information on the diversity of interactions between trees and fruit-eating animals than those obtained (and published) in the academic literature that required decades of work.”

Local people also added interactions involving species in the area that were not previously known to eat fruit such as forest mongoose, giant pangolin and python. Three such species, white-legged duiker, forest buffalo and Defassa’s waterbuck were captured feeding from trees by the researchers’ camera traps, validating the extensive knowledge of local people.

The results demonstrate the need for integrating local sources of knowledge, which have historically been undervalued, with academic knowledge to truly understand the complexity of ecological networks in nature. This is particularly important in remote locations, where conducting research is expensive and potentially dangerous.

“An important aspect of ecological studies is to gather as much knowledge as possible to have a better view of how ecosystems work.” said Clémentine Durand-Bessart. “Our study clearly demonstrates that local ecological knowledge, which is often unique, is invaluable to understanding numerous ecological processes, particularly in remote areas. The addition of these interactions to those of the academic literature are changing what we know of tree-frugivore interactions and will ultimately help to inform how we protect these species and habitats.”

The researchers also highlight that this needs to be a collaborative relationship with local communities. Clémentine Durand-Bessart added: “It’s essential to work together so that both parties can benefit from this type of research programme. This can be done through valuing local knowledge and compiling the collected knowledge in local dialects. I also think it’s really important to share the feedback from the study to local communities who make this type of research possible.”

In the study, the researchers assembled a photographic guide of 100 frugivore species and 286 fruit-producing trees found in Gabonese forests that were known in academic literature. They then interviewed all 39 inhabitants of the village of Doussala, southwest Gabon in 2019. After indicating the species they knew in the photographic guide, the researchers asked which species of frugivore consumed which fruit-producing tree species. After analysing the information from these interviews, the researchers compared this local ecological knowledge with academic literature.

The Covid-19 pandemic restricted the researchers from returning to Gabon and conducting further interviews with other communities in the area. “A greater number of informants would give us greater scope of local ecological knowledge on frugivory interactions and a better understanding of differences in frugivory knowledge.” said Clémentine Durand-Bessart. “Next we would like to pursue this research in different communities, in different countries and add more species.”

Clémentine Durand-Bessart will present the work at Ecology Across Borders. This work is unpublished and has not been through the peer-review process yet. This conference will bring together over 1000 ecologists to discuss the most recent breakthroughs in ecology.

About the British Ecological Society
Founded in 1913, the British Ecological Society (BES) is the oldest ecological society in the world. The BES promotes the study of ecology through its six academic journals, conferences, grants, education initiatives and policy work. The society has 7000 members from more than 120 different countries. www.britishecologicalsociety.org
Twitter and Instagram: @BritishEcolSoc