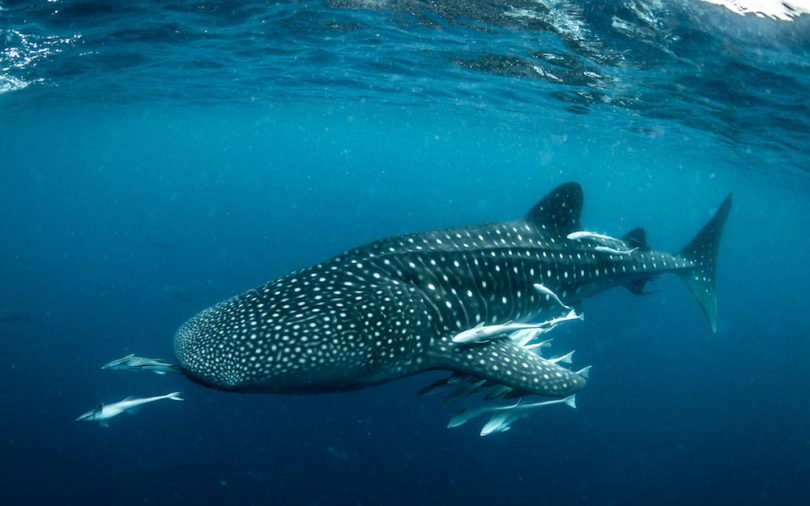 In a new study published in the journal Aquatic Conservation: Marine and Freshwater Ecosystems, researchers have discovered that Madagascar is a globally important hotspot for whale sharks (Rhincodon typus), the world’s largest fish. The scientists emphasize the vital need to protect these gentle giants.

Researchers from the Madagascar Whale Shark Project (MWSP) identified over 400 individual whale sharks off Nosy Be, an island in northwest Madagascar, between 2015 and 2019. Lead author Stella Diamant, a research associate with the Marine Megafauna Foundation (MMF) and founder of MWSP, said, “it’s exciting to finally have evidence that, as we suspected, Madagascar is a world hotspot for whale sharks.”

All of the identified sharks were juveniles, measuring between 3 and 8 meters in length. “Nosy Be is an important feeding area for these growing sharks. We saw 98% of the sharks while they were feeding on small fish at the surface. Some of the sharks are moving through the area quickly, but others seem to come back every year to take advantage of the seafood buffet,” continued Diamant.

None of these sharks, which can be individually identified by their unique spot patterns, have been seen elsewhere in the Indian Ocean. “Whale shark numbers have taken a real beating in the Indian Ocean, and they’ve largely disappeared from some countries like the Seychelles. It’s hugely encouraging to discover this big population that we didn’t know about previously,” said Dr. Simon Pierce, one of the founders of MMF and co-author on the study.

Renowned for its unique animals, Madagascar has become a global ecotourism hotspot. International tourism to Madagascar increased by 72% between 2015–2019, from 282,000 to 486,000 arrivals. Nosy Be, in the country’s northwest region, has become a popular marine tourism destination due to the presence of whale sharks, whales, manta rays, and other marine megafauna species. International tourism arrivals to Nosy Be increased by 91% from 2015 to 2019, with a significant proportion coming to swim with the increasingly-famous whale sharks.

“People travel from all over the world to swim with these gentle giants. That offers a clear opportunity for the ecotourism industry within the country—it’s already a million-dollar industry, but efforts must be made to protect these endangered sharks and secure the livelihoods they sustain,” said Dr. Jeremy Kiszka, an assistant professor at Florida International University and co-author of the study.

Whale sharks are not protected in Madagascar and the researchers raised concerns about human threats to this endangered species. 30% of the sharks had scars, with most from either vessel strikes or entanglement in fishing gear. “The area where most whale sharks feed lies outside existing marine protected areas in the region,” said Diamant. “By protecting the sharks, their habitat, and their food supply, it’s possible to safeguard the whale sharks themselves, the ecotourism industry, and the local economy that this activity supports.”

This study was led by the Madagascar Whale Shark Project in collaboration with the Marine Megafauna Foundation, Florida International University, and Mada Megafauna. It was supported by Aqua-Firma, Waterlust, the PADI Foundation, the Lush Foundation, the Vocatio Foundation, and private donations.