Home » Gazing in the Broken Mirror 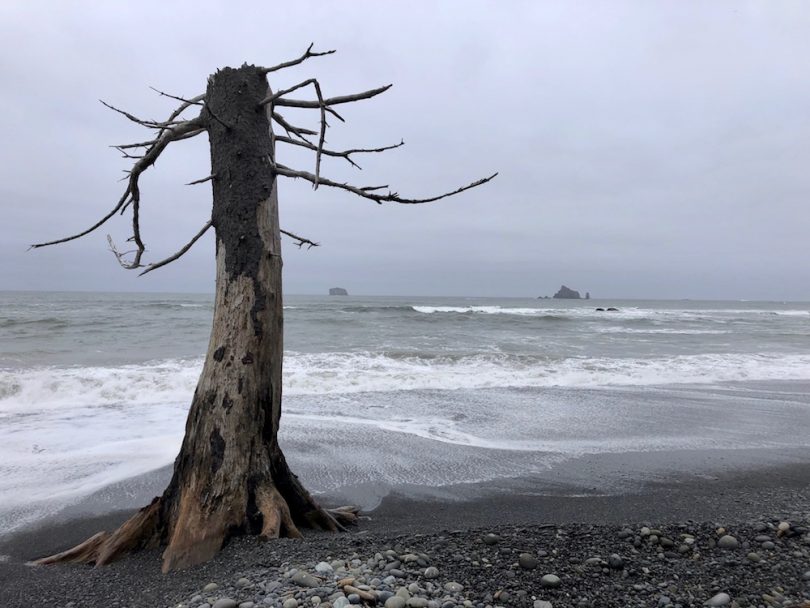 As the mercury rises with climate change, despair can seem like a fitting response. Drought, wildfire, surging seas, fallen species — it’s easy to think nature is raging all around us and there is no way to tame the tempest. Worse yet, climate scientists have determined that we are at fault, fuelling our own demise with cars and cows and corporate greed. If only we had more time, more knowledge, more power to reverse the deadly trends. If only humanity cared enough to try.

This is a tiring story, especially for those of us who wake up at night fretting about how it might end. But in their compact new book, Full Ecology, social-cultural psychologist Mary M. Clare and science writer Gary Ferguson remind us there is an antidote to climate fatigue. And we carry it with us in our genes.

The book’s introduction features two black-and-white photos of children outdoors: A pint-sized Clare plays with tadpoles; a three-year-old Ferguson tosses bread to the birds. Most of us hold similar images in the dusty corners of our minds, and they can help guide us back to a time when we didn’t separate the nature within us from what the authors refer to as the landscape of our being. Hence, Clare and Ferguson tell us, “this is a book about repairing the bridge between the ecology ‘out there’ — the healthy functioning of a forest or ocean or grassland — and the health and creative capacity of your thoughts and perceptions.”

With a touch of irony, Full Ecology can perhaps best be described as an environmental self-help book that urges readers to let go of the “me story” — advice I first heard from Ferguson when he served as my MFA mentor in the 2010s. Initially I was perplexed by the suggestion: I’d come to the programme in hopes of crafting personal essays. But the nugget of Ferguson’s teaching is that the me story often “hides in a not-me story”, and that the resulting “separation myth” cleaves us from the larger story of our connections with others, our culture, our very existence in nature. Ferguson’s body of literary work, including his stirring memoir, The Carry Home, illustrates that master storytelling elevates our individual stories into sagas about interdependence.

What does the me story have to do with climate change? Here, Clare’s expertise as a psychology professor further heightens the authority of the text. She and Ferguson call attention to the infinite “social ecologies” between and within us, urging honest reflection on our driving thoughts and beliefs — which are too often rooted in false dichotomies. The beliefs we hold about who we are filter what we take in and what we let out, they say, and ultimately mediate the policies that shape our society. “Social ecologies are where human actions originate. And they can either invigorate or degrade our chances for living worthy lives on a wounded planet.”

Clare and Ferguson organise the core of the book around four fundamental behaviours essential, as they see it, to climate repair: Stop, Ask, Act, Inspire. The first step in moving forward, the authors tell us, is to simply stop — to be aware of where you’re putting attention, and to consider how this perpetuates the illusion that we live in a world of separate beings. “Climate repair starts up close, as locally as your next thought.”

As I read, slowly, through the book — while camping on a wild coastline, then flying cross-country in a crowded plane — I felt its truths unfold within me in a challenging yet refreshing way. For many of us, the political strife of the last few years, coupled with the pandemic, has inflamed our cynicism and done little to inspire unity or hope for climate repair. The authors point out that there is an important lesson to be learned from our woes: “The panic and disharmony set loose with Covid-19 arose from the same old separation focus — what about me and mine? But in short order it became clear to many of us that we are only as safe as everyone else.” Nothing truer could be said about climate change.

We all possess the “evolved instincts and reflective skills” to respond to uncertainty, the authors argue, and “acts of mystery mean showing up in the unpredictability of it all and doing our best.” Climate repair demands that we move beyond the me story, accept the precariousness of a warming planet, and listen to nature’s wisdom within.

About the Author: Paula MacKay is a freelance writer-researcher and field biologist, having studied bears, wolverines, and other wild predators for the past two decades. Paula served as managing editor for Noninvasive Survey Methods for Carnivores (Island Press, 2008) and earned an MFA in creative writing from Pacific Lutheran University in 2015. She has written for numerous conservation groups, books, and magazines. You can find more of her work at https://paulamackay.com.

Header image: As I read, slowly, through the book — while camping on a wild coastline, then flying cross-country in a crowded plane — I felt its truths unfold within me in a challenging yet refreshing way. Photo by Paula MacKay.