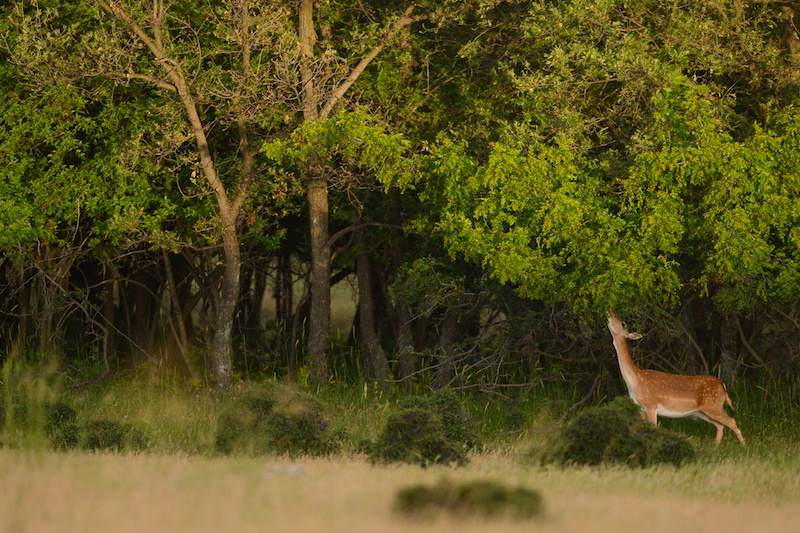 Scientists from the German Centre for Integrative Biodiversity Research (iDiv), the Martin Luther University Halle-Wittenberg (MLU) and Rewilding Europe have developed a new way of evaluating rewilding progress. Its ground-breaking application across seven of Rewilding Europe’s operational areas has revealed both positive impact and challenges to upscaling. The practical tool can help to inform decision-making and drive rewilding onwards and upwards. The study was recently published in the scientific journal Ecography.

Over the last decade, rewilding has emerged as an immediate, pragmatic, scalable, and cost-effective way of restoring natural processes and enabling wildlife comeback across large-scale European landscapes, supported by trends in human demographics, associated changes in land use, and the ongoing recovery of key wildlife species. To ensure rewilding continues to grow – and to scale it up as quickly and effectively as possible – it is critical that the impact of rewilding can be easily, accurately, and comparably measured.

The application of a recently developed way of measuring rewilding progress is a huge step forward in this regard. The paper authored by the doctoral researcher Josiane Segar and colleagues at iDiv, MLU, and Rewilding Europe, together with other European institutions – discusses the first time application of this methodology to seven of Rewilding Europe’s operational areas. The results generated reveal that encouraging progress has been made at site level, but that challenges to upscaling also exist.

From theory to practice

The new paper builds on an article published in the journal Philosophical Transactions B in 2018, which first introduced a three-axis framework for monitoring rewilding. Co-researched and developed by Rewilding Europe, this framework condenses ecological recovery into three key components.

In 2020, this three-axis framework was used as the basis for evaluating rewilding impact across seven of Rewilding Europe’s operational areas. A total of 19 indicators (10 relating to human intervention and nine to ecological health) were selected to measure the ecological impact of rewilding interventions across each of the three framework components, plus an additional socio-ecological component. Baseline values for each of these indicators, which were set to the year that rewilding in each area began, were then compared with values as they stood in December 2020. Changes in these indicators were then used to generate an overall rewilding score for each area.

The study reveals that the new approach to monitoring impact generated some interesting results. Five of the eight rewilding areas saw an increase in rewilding score over time, while two areas saw decreases (the Rhodope Mountains and Velebit Mountains). The five areas where the score had increased all reported decreases in interventions by humans in the landscape, while four of these areas also reported increases in ecological health.

The biggest improvement overtime was reported in the Central Apennines, with a relative increase of 47.1% from 2012 to 2020, and improvements in 14 of the 19 indicators. The Rhodope Mountains reported the largest decrease in rewilding score over time, with a change of -13% from 2011 to 2020.

It is important to note that a negative rewilding score for a landscape-scale rewilding area does not mean that rewilding interventions at specific, smaller-scale sites within that area are failing to have a positive impact. Nature also moves to its own rhythms and timescales, which means such interventions, may take decades to generate measurable impact.

“In applying the new methodology at the landscape scale, we wanted to look at the potential for upscaling rewilding,” explains Josiane Segar. “This bigger picture approach not only took into account the direct, site-specific interventions of Rewilding Europe’s operational area teams but also changes happening outside pilot sites. Some or all of these changes may be outside the control of rewilding teams.”

The Rhodope Mountains rewilding area, for example, has been affected by a trend that has seen land abandonment beginning in the 1990s recently revert back towards agricultural intensification and encroachment as a result of Common Agricultural Policy (CAP) subsidies. This has manifested itself in the ploughing of high-biodiversity value grasslands and mosaics into arable fields, as well as an increase in livestock and grazing intensity, both of which have negative implications for rewilding progress. In order to counterbalance this threat, rural policies may need to be better targeted to allow people to make better use of the socio-economic benefits that rewilding can provide.

The new study also compiled key success and threat factors for rewilding progress, based on an assessment by rewilding area teams.

“This revealed that the major challenges to rewilding progress are related to policies that promote land-use intensification, such as the European Union’s Common Agricultural Policy (CAP), and the persecution of keystone species,” says Segar. “Conversely, the most important factors aiding progress related to the appeal of rewilding as a concept and effective communications about rewilding results. Creating new economic opportunities and establishing good working relationships with stakeholders were also judged to be important.”

Today, interest in rewilding is growing rapidly – among scientists, policymakers, businesses, and the public. Yet the application and upscaling of rewilding beyond pilot sites remain limited. This can be partly attributed to a lack of monitoring, with the long-term consequences of rewilding interactions still poorly understood.

“Until now there has been very little robust scientific assessment of whether rewilding actually works,” says Henrique Pereira, a researcher at MLU and iDiv and co-author of the new paper. “This new study, representing innovation at the intersection of rewilding science and practice, is therefore really important. I expect the methodology underpinning it to be picked up by many other researchers and rewilding practitioners, adapted and used. Beyond the numerical scores, this is a practical tool that can really help to inform decision making and drive rewilding onwards and upwards.”

Using the new methodology, the rewilding impact will now be measured across Rewilding Europe’s rewilding areas every three to five years – this will allow sufficient time for ecological parameters to respond to rewilding interventions and ongoing area management. To complement and ease the task of expert-led assessment, Rewilding Europe’s monitoring team are currently developing data-driven, remote sensing approaches to monitoring, in partnership with The Nature Conservancy and several universities. This is particularly important in areas where ground-based measurements are likely to remain unfeasible due to resource restrictions.

Above all, the results of the new study show that the ability of rewilding to progress and scale-up is often constrained by pressures that are dictated by factors external to rewilding sites. As such, creating an environment more conducive to rewilding can often only come about through policy change at the national and EU level.

“It’s clear that rewilding efforts are already beginning to have a positive impact at the local scale,” says Josiane Segar. “However, future efforts should be better complemented by policy and advocacy if rewilding is to become scalable across entire landscapes.”

Header image: Over the last decade, rewilding has emerged as a pragmatic way of restoring natural processes and enabling wildlife to comeback across European landscapes. Credit: Staffan Widstrand / Rewilding Europe.