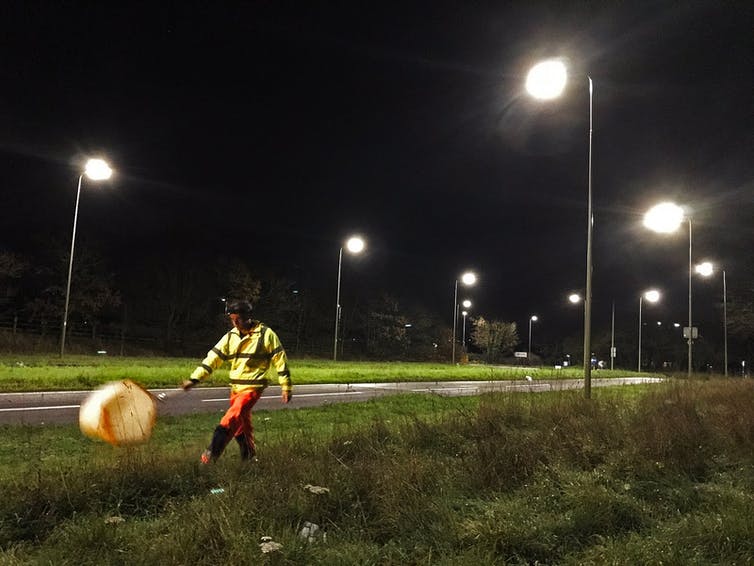 Life on Earth has evolved alongside predictable cycles of day and night. But this pattern has become increasingly blurred. Between 2012 and 2016, satellite measurements revealed that the global area polluted by artificial light grew by 2% each year, intruding ever deeper into biodiversity hotspots like tropical forests.

In this context, there is an important change taking place in the UK: the replacement of older, less energy-efficient sodium street-lighting with white LEDs. While accurate statistics are hard to come by, a quick internet search indicates that most UK councils are well on their way to replacing all their streetlights with LEDs.

LEDs used in streetlights typically emit white light, while sodium lamps have a characteristic yellow glow – as seen in the picture below. This change in the colour of artificial light is predicted to have major consequences for wildlife. That’s because white LEDs emit light across the entire visible spectrum. The more wavelengths emitted, the greater the diversity of species and biological processes that are likely to be disrupted.

In the cold light of night

Insects are known to be more sensitive to shorter, bluer wavelengths of light, which are largely absent from sodium lighting. Biological processes that are controlled by daylight and internal circadian rhythms, such as reproduction, are more likely to be disrupted or prevented by white LEDS.

To investigate how the shift towards white LED lighting is affecting insects, I turned my attention to moth caterpillars. Moths are certainly not the only group of insects to suffer from light pollution, but they are the best studied. Adults can fly large distances in their lives, but their caterpillars don’t disperse far from where they hatched from an egg. This allowed us to make more precise estimates of how lighting affects local populations.

Working with a team of researchers from the UK Centre for Ecology & Hydrology, Newcastle University and Butterfly Conservation, I searched the Thames Valley area for roadsides with both lit and unlit habitats. Around 500 potential locations were whittled down to only those that were more or less identical – apart from the presence of street lighting.

We studied 27 sites, all of which had a lit and an unlit section, separated by a buffer of at least 60 metres. These sites had either white LEDs or sodium lights in their lit sections. The sites were grouped into those with grassy margins and those with hedgerows. This was important, since grass and hedgerows support different groups of caterpillars.

I spent some 400 hours over the last three years dressed head-to-toe in hi-vis collecting data, and counted 2,478 caterpillars. The results, published in Science Advances, were striking. Lighting reduced the numbers of caterpillars by between one half and one third. Lit areas almost universally had lower numbers than their darker counterparts. Sites with white LEDs also had a steeper reduction in numbers compared to sites with sodium lamps.

We suspect the reason there were fewer caterpillars in lit areas was because the lighting prevented females from laying eggs, a behaviour that has evolved in darkness. In addition, adult moths can be drawn up to streetlights, where they’re easy pickings for bats. Our recent review article revealed many other plausible mechanisms through which lighting could cause population declines throughout the moths’ life cycles.

Long-term moth declines have been reported from parts of Europe, especially in Britain (thanks to its long history of monitoring). In Britain, moth numbers have declined by one third since the 1970s. There are also sporadic data showing evidence of moth declines in other parts of the world.

Our study adds weight to the idea that light pollution may have contributed to nocturnal insect declines. We don’t know how important light pollution is relative to other causes of decline, such as habitat loss and climate change. But we must try to reduce the impact of any factors diminishing insect populations, given the fundamental role that insects have in ecosystems: as pollinators, predators and prey, feeding songbirds, bats and hedgehogs.

The good news is that of all the causes of biodiversity loss, light pollution should be one of the easiest to solve. Making subtle tweaks to existing lighting can mitigate its ecological harms.

This is where LEDs have the upper hand over traditional lighting technologies. They can be easily dimmed, integrated with motion sensors so that lights only turn on when people are around, or integrated into “smart” street lighting systems to reduce light pollution.

For insects, however, the evidence on how far changing the colour of LED lighting can successfully combat its negative impacts is mixed. Some studies show that red LEDs do well at preventing negative impacts, including lighting interfering with reproduction. Yet other studies have found that red LED light can be as harmful as white light in reducing moth numbers. Therefore, the best option is to reduce the extent and intensity of lighting.

Bringing back the night

Solving other biodiversity threats like climate change often means long delays between taking action and seeing the benefits. But when it comes to light pollution, there are no such lag effects between action and outcome. If lights are switched off – or at least dimmed during the early hours – darkness returns immediately. Our wildlife would be expected to recover quickly.

Of course, streetlights exist for a reason. We need more research into their negative effects, but we also need better evidence on how lighting benefits society. Benefits can include reducing vehicle collisions, cutting crime, and increasing feelings of safety.

Once we fully understand the pros and cons, we can design solutions that maximise the benefits of streetlights for people, while minimising their harms to the insect ecosystems with whom we share our cities.