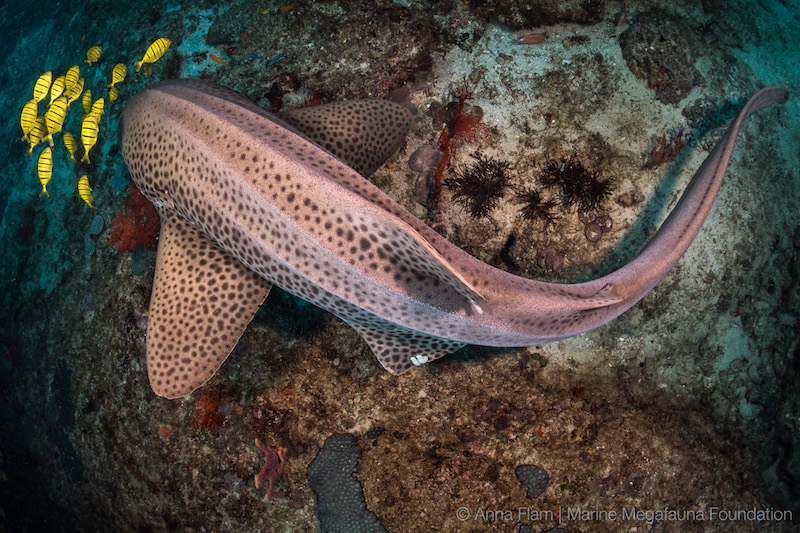 Research published by scientists from the Marine Megafauna Foundation (MMF), Swansea University, and All Out Africa is the first to describe a population of endangered zebra sharks (Stegostoma tigrinum) in Africa. The study revealed a key global hotspot and potential breeding area, a critical habitat for protection. Based on these findings, scientists recommend species-level protection and expansion of marine protected areas, to safeguard this charismatic species.

Lead author, Saoirse Pottie explains: “This study adds credibility to using a multi-faceted approach to collect baseline data for marine species. When used in combination, fishers’ observations and dive surveys can complement each other. Fisher surveys can collect sightings information at a wider spatial scale than underwater surveys, yet dive surveys are capable of providing more in-depth information on the movement and behaviour of individuals.”

The authors hope to inspire other researchers working in data-deficient locations. “This approach could be applied in other regions to highlight areas of interest, prioritise research activities, and inform conservation actions. The inclusion of local knowledge also provides an opportunity to enrich our understanding of social-ecological systems, engage local communities, and make environmental decisions that are more inclusive,” continues Pottie.

Photos taken by scientists and recreational scuba divers between 2010 and 2018 identified 90 individual sharks of both sexes. 38% of sharks were seen in multiple years, indicating an affinity for the area. Over 62% of the sharks were mature. The high frequency of both male and female adult sharks in a small area indicates a breeding area, which is a prime habitat for protection.

While zebra sharks are listed as endangered by the IUCN Red List of Threatened Species, they lack formal protection in Mozambique, and the majority of the suitable zebra shark habitat identified in this study remains unprotected. According to co-author Anna Flam, a scientist with MMF, “this is one of the world’s largest identified populations of zebra sharks and we should protect them, otherwise, we could see them disappear, as has happened in parts of Southeast Asia.”

Recreational scuba divers also assisted in data collection. Zebra sharks have unique spot patterns that can be used to identify individuals and track them over time. Identification photos contributed by scuba divers allowed researchers to increase the scope of data capture. Over the course of this study, the researchers helped create the Wildbook for Leopard Sharks, a global online database that allows scuba divers to submit their photos to support research around the world.

The study by Saoirse Pottie, Anna L. Flam, Jennifer A. Keeping, Cacilda C. Chivindze, and James C. Bull titled “Quantifying the distribution and site fidelity of a rare, non-commercial, elasmobranch using local ecological knowledge” was published in the journal Ocean and Coastal Management on 5 July 2021 and is available here.