Home » There are over 7,000 English names for birds – here’s what they teach us about our changing relationship with nature 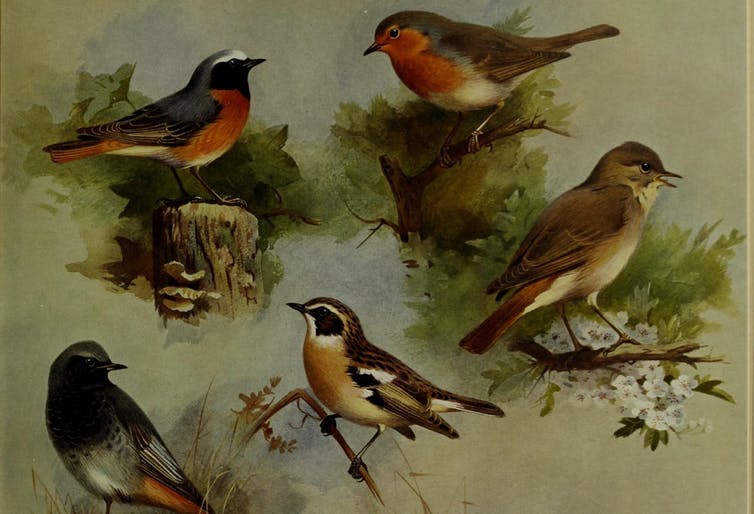 I shall never forget hearing my first nightingale. It was May 8 1980, and as a recent graduate in environmental biology, I had moved to Oxford.

While searching for a job, I volunteered my time transcribing bird records for the Oxfordshire Biological Records Scheme based in the County Museum. Here I discovered that the nightingale, a bird that had so far eluded me, was not uncommon locally. A friend at the museum advised me where best to look for one.

And so, at 10pm on a mild, still, moonlit night, I found myself four miles east of Oxford. With neither traffic nor artificial light to disturb the stillness, I heard absolute silence pierced only by the unmistakably rich music for which I had waited so long.

My notebook records that I saw one, and heard five, distinct nightingale voices that night: originating from Whitecross Green Wood a mile to the north, Waterperry Wood as far to the south, and Bernwood Forest to my southeast.

As an ornithologist, I knew that these birds had arrived in recent weeks from west Africa, risking their lives to cross the Sahara and join this choir. Here, they directed their voices at any passing female nightingale, advertising that they had found a suitable location to continue creating the magic.

Ten years later, the M40 motorway was extended beyond Oxford, bisecting the landscape and drowning nature’s night music with the rumble of traffic. One by one, these ancient woods fell silent.

Over the next few years, I delighted in discovering more nightingales around Oxford in Brasenose Wood, Otmoor Spinney and even a back garden in Kidlington. I encountered five singing males in Wytham Woods in 1982, where I had found work as a research assistant, and where I discovered that the nightingale’s sweet song mixed at night with the heady fragrance of honeysuckle.

My experience of the nightingale was holistic. It brought all things – time, place, sights, sounds, scents, my lived experience – together into sharper focus.

My research on bird names suggests that such encounters with birds have always been part of a deeper and largely unrecorded human history.

Echoes of those relationships come to us in the documented folk names of birds. In the English language alone, more than 7,000 names have been recorded for some 150 bird species in the British Isles, with yet more in Scottish Gàidhlig, Irish Gaeilge, Welsh Cymraeg and Cornish Kernewek.

Each different name recalls a context of folk encounter with birds: sometimes these encounters are discernible, sometimes they’re obscured by the distance of time and culture. Names such as Sally Wren (for the willow warbler Phylloscopus trochilus), Polly Dishwasher (the pied wagtail Motacilla alba), and Tom-in-the-wall (the wren Troglodytes troglodytes) suggest a wealth of potential connections with birds experienced by our ancestors.

For example, the name “wren” implies a small bird, as does the name “Tom” (as with the folklore character Tom-thumb). But “Sally” is etymologically both a girl’s name, a reference to the bird’s frequent appearance in willow trees (the Latin name for willow is Salix) and to its behaviour (“sallying for”, or catching, insects). Dishwasher is a reference to the pied wagtail’s appearance and movement near water, while “-in-the-wall” indicates the wren’s nesting place.

The details of these names provide valuable information about the cultural context in which they were coined. The inclusion of an element in the bird’s name indicating close familiarity or friendship, such as a first name, is strikingly common. In fact, it appears in one or more of the names of 62 out of 78 songbirds.

These elements suggest that names were being coined through people creating memories with and for their children that were rich with bird life – experiences which included birds as beloved family members.

Such elements also indicate that up until fairly recently, the population of the UK was not only deeply familiar and comfortable with nature, but also possessed sophisticated knowledge of the ecology and behaviour of wild birds – independent of any scientific framework.

My colleagues Karen Park, Felice Wyndham, John Fanshawe and I have created the Ethno-Ornithology World Atlas for people to document, record and share their names for, folklore about, and encounters with birds. We do this work partly because, like the nightingale, the world is losing its voices – many of which are those of indigenous people – speaking out against the destruction of habitats. But we also hope to inspire new encounters that benefit both birds and people.

By 2000, nightingales had disappeared from all the sites where I had once known them. One by one, they had fallen prey to human development, habitat modification or loss, or the increased risks imposed on their migration.

Researchers and activists have long been pointing out the growing disconnection of people from nature, and the “extinction of experience” that this entails.

My own recent research suggests that over 40% of UK-born undergraduate biology students cannot name five British bird species: giving generic names such as “duck” rather than “mallard”, or “seagull” rather than “black-headed gull”. As we lose knowledge of the names of birds and other creatures, we risk also losing the cherished, ancient relationships with nature that lie behind these names.

Over billions of years, the tapestry of life on Earth has been woven from the threads of innumerable lives, including ours. Our very survival depends on that tapestry. Conservation science documents the declining populations of countless species, and the diverse causes and consequences of that decline. But when it affirms these concerns with purely economic arguments for why they matter, we risk losing sight of a deeper, more vital issue – that humanity is part of, not merely an observer of, the web of life.

Header image: The common nightingale is a small songbird best known for its powerful song. Credit:Biodivlibrary/Flickr.