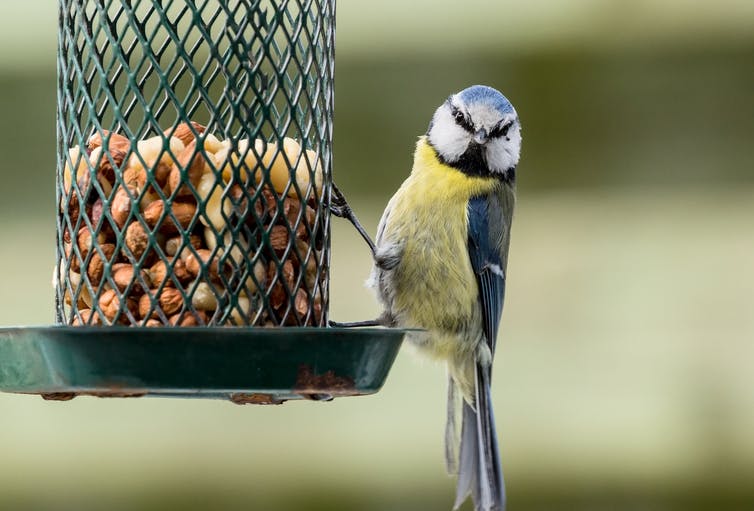 I’ve filled feeders with seeds and nuts since I was a child and I’ve always loved seeing which birds arrive. I’m not alone – around half of all UK households do the same nowadays, spending £250 million on 150,000 tonnes of bird food each year. That’s enough to feed three times the breeding populations of the ten commonest garden species if they ate nothing else all year, with one feeder for every nine birds that use them.

Have you ever wondered how all of that additional food might be affecting wild birds? How much has our generosity changed their natural diet, and what of the bird species we don’t see visiting garden feeders?

If you live in the UK, one garden visitor you’re probably used to seeing is the blue tit. Blue tits are small, fast and often feed high in trees on tiny insects. Seeing exactly what they eat is tough. But with new molecular technology, we were able to test blue tit poo from 39 woodlands across Scotland – some close to houses, some on remote mountainsides and some by the sea – and gain a fascinating insight into their average diet.

What myself and fellow researchers found surprised us. A small moth caterpillar that lives on birch trees was their most common natural prey item, present in a third of the poos we sampled. But among hundreds of species of insect prey, we also found garden bird food – and lots of it.

Peanuts were present in half of all the poos – the most common food item for Scottish blue tits – and sunflower seeds in a fifth. And the birds weren’t just popping next door to find these garden treats. Some were travelling as much as 1.4km from remote areas to nibble on their favourite garden snacks. Clearly this has become part of their staple diet.

Eating the food we provide gives blue tits more energy to lay eggs – five days earlier than blue tits that don’t. These earlier breeders are likely to raise more healthy chicks. Eating bird food was also linked to a nearly four-fold increase in the proportion of adults available to breed in a given area. Where there used to be one pair of blue tits nesting, garden bird feeders nearby meant there was now likely to be almost four pairs sharing the same space.

Other woodland species such as great tits, nuthatches and great spotted woodpeckers that enjoy garden bird food are doing very well too. Their UK populations have increased on average over the last 25 years that bird feeding has really taken off.

How to help all woodland birds

On average, woodland birds that don’t use garden bird feeders have declined over the past 25 years, some to the point where they have almost disappeared from the UK countryside. Nobody knows exactly why, and while this may be partly due to their habitat fragmenting and the climate warming, garden bird-feeding may have also played a role.

Due to people feeding them, there are now more dominant blue and great tits in the woods than 25 years ago, eating more of the limited natural food and evicting other species from their nests. There are also more great spotted woodpeckers and squirrels, which eat the chicks of some birds. Perhaps an extra 700,000 pairs of very healthy and dominant great tits in woodlands is too much for the UK’s remaining 2,000 pairs of shy and subordinate willow tits.

While our results suggest there’s a link between how much woodland birds visit feeders and their population trends, they don’t show a direct cause, so we shouldn’t panic yet. While scientists study this problem, responsible bird lovers can help.

Consider contributing to the garden bird surveys organised by the RSPB and the British Trust for Ornithology to help scientists keep track of where birds are, in what numbers and what they’re doing. If you’re lucky enough to live where rare woodland bird species can still be found, consider providing less bird food to common species and cleaning your feeders regularly.

Meanwhile, there are more natural ways to encourage wild birds into your garden. Planting native shrubs and trees like rowan, hawthorn, silver birch, spindle and guelder rose is one option. They are all beautiful year-round, fairly small and provide excellent habitats for wild birds. Other ideas include mowing lawns less often and digging ponds.

As some rare species nest close to the ground, please keep dogs on leads while walking in woodlands during the spring too. But most importantly, keep enjoying the UK’s beautiful birds – in all their miraculous diversity.