Home » UK winter holidays no longer needed by some ducks 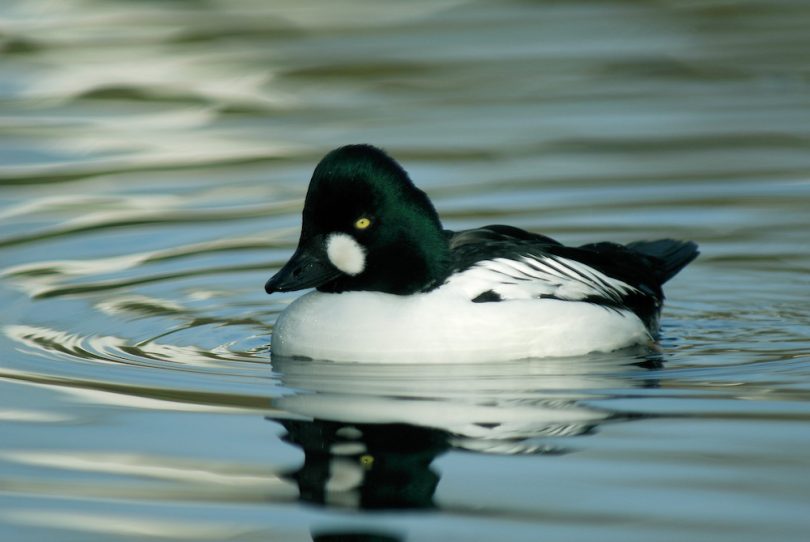 The latest Wetland Bird Survey Report (WeBS) published today shows that for some species of waterbirds, crossing the North Sea for a winter holiday in the UK may not happen every winter.

As parts of northern Europe begin to experience warmer and wetter winters more regularly, species that traditionally crossed the North Sea in search of milder winters in the UK are now spending their winters much further north and east than they were, and none more so than the Scaup. Scaup is a diving duck, similar to the more familiar freshwater Tufted Duck, but found in shallow marine waters or very large freshwater lakes.

Britain and Ireland were an important wintering area for this northern-breeding seaduck, but during the last 50 years overwinter numbers have been falling. According to the latest annual WeBS report the number of Scaup wintering in the UK has declined by three quarters since the peak in the 1973/74 winter. At the same time, Scaup counts in the winter have increased in northern and eastern Europe. However, this may not be to the species’ advantage in the long-run, as Scaup are being lost in fishermen’s nets and struggling to find food in areas that are being overfished around the Baltic Sea.

With the winter of 2019/20 being the warmest on record in Europe, part of an ongoing warming trend, it is not just Scaup that are opting for short-haul options nearer their breeding grounds. Goldeneye and Bewick’s Swans from the northwest European breeding population are also remaining on the other side of the North Sea in increasing numbers during the winter months – these species declined by 58% and 88% respectively between the winters of 1993/94 and 2018/19. Surprisingly perhaps, given its ubiquity during the breeding season, the number of Coots that come here for winter has also fallen, down by 15% over the same period.

Results from the International Waterbird Census and International Swan Census, which WeBS feeds into for the UK, give the bigger picture for the population declines being seen here. Whereas the European populations of Coot and Goldeneye appear to be stable overall and the observed changes are due to redistribution of wintering areas, the breeding populations of Scaup and Bewick’s Swan have declined, as well as experiencing changes in their winter distribution.

In Northern Ireland, Scaup has fallen by 60% between 1993/94 and 2018/19, although Lough Neagh remains the wintering stronghold in the UK. Goldeneye has declined by 89% and for the Bewick’s Swan Northern Ireland is no longer a winter destination, with no birds being recorded during WeBS Counts for over ten years.

Following the sharp decline in the late 1970s, Scotland has seen its overwintering Scaup numbers further fall by 22% between 1993/94 and 2018/19. Goldeneye and Coot both fell by 38% over the same period.

Teresa Frost, WeBS Manager at the BTO, said “The big drop in Scaup in Scotland in the 1970s was linked to a reduction of waste grain from whisky distilleries ending up in estuaries, but the continued decline since then is driven by milder winters in the Baltic Sea – and that’s affecting lots of species. But we are fortunate to still have many hundreds of thousands of waterbirds visiting the UK in winter, even if the numbers are not quite what they used to be for some species, and we are grateful to the many volunteers who count them for us and make it possible to understand what’s changing.”

Simon Wotton, Senior Conservation Scientist at the Royal Society for the Protection of Birds (RSPB), said, “Whilst the decline of some wintering waterbirds here in the UK means certain species are not migrating as far, there is concern over where they are now spending most of their time. Wetlands across Europe are vital for millions of waterbirds every year and provide them with a much-needed home through winter, but not all are created equal. Many of Europe’s wetlands have been drained, exploited and some are without protection altogether. Ensuring these areas are designated and protected appropriately will become even more critical in safeguarding the ongoing survival of many of our migrating waterbirds.”

Colette Hall, Senior Research Officer from the Wildfowl & Wetlands Trust (WWT), said  “Scaup and Bewick’s Swans changing migration is an excellent example of why waterbird conservation is needed at an international scale. Not only is it vital to understand how distributions are changing amongst these species due to climate change, it is also really important to ensure that both the new areas the birds are using, and the old ones that they may still need in harsh winters, are effectively protected.  Whilst thousands of waterbirds can find a safe-haven at WWT and RSPB reserves in the UK, each of the WeBS partner organisations continue to work with international colleagues to support and engage in the monitoring, research and action needed to ensure that species and habitats are maintained and protected across the European flyways and beyond.”

For more information and to read the full report, please visit www.bto.org/webs-annual-report