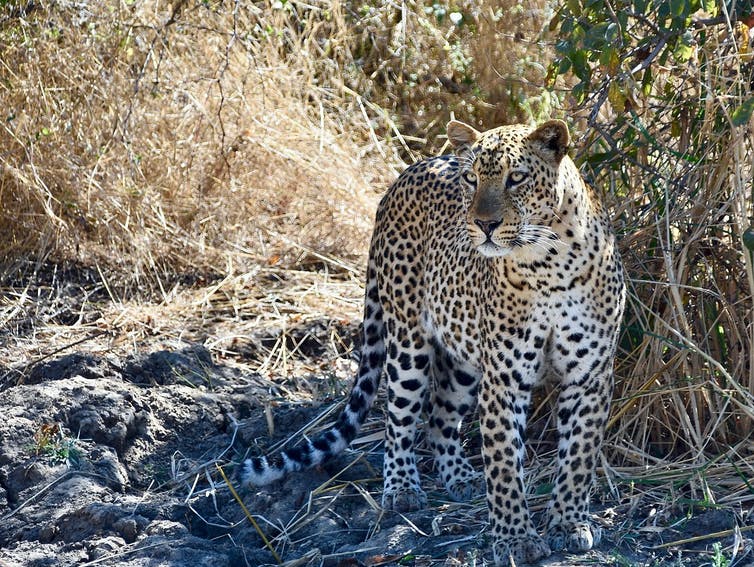 Leopards are among the most widespread carnivores today, living in a wide range of habitats, from deserts to rainforests, and from the lowland plains to the mountainous highlands.

Over the past century, they’ve experienced extreme habitat losses due to human activity, both directly from hunting and indirectly from habitat reduction and prey competition. This has led to the land they occupy being reduced by over 50% in Africa, and over 80% in Asia, involving the local extinction of many populations.

Genetic analysis of leopards is important to understand their population history, structure and dynamics. Particularly important is the analysis of whole nuclear genomes, which means all the DNA contained in the cell core – approximately 2.5 billion DNA bases (pairs of DNA building blocks).

In new research, we studied the genomes of modern and historical leopards, using samples gathered from an unusual place – natural history museums. And we found a surprising level of genetic separation between leopards from different parts of the world.

Normally, genetic analysis involves collecting fresh tissue samples. For leopards, doing this would be extremely difficult. The animals are hard to track down, particularly in areas where they are rare, and invasive sampling can be bad for the animal.

Animals bred in zoos may not be a good option as they may be mixtures of multiple wild populations. Getting samples from areas where they have been eradicated is not possible at all. For these reasons, we turned our sampling efforts to museums.

Natural history museums across the world are filled with skins, skeletons and even complete taxidermy specimens, often collected decades and decades ago. It’s a lot more challenging to extract genetic material from these old specimens, both from a technical and a financial point of view, because the DNA in such samples is more degraded, and sometimes includes large amounts of contaminant DNA in addition to the leopard DNA. But doing so allowed us to collect data from leopards covering their entire distribution, both current and historical.

This would have been near impossible if we only looked for fresh tissue samples. The collection of this genetic data allowed us to investigate the global population dynamics of leopards, with unprecedented resolution.

We collected material from many museum specimens, and investigated the DNA quality in each. Then, we selected the best samples from which to sequence hundreds of billions of bases of DNA. Using high powered computational resources we compared the DNA from all leopards to each other, and ran a range of different types of analyses to better understand how they differ.

One of the most striking revelations we found was a marked distinction between African and Asian leopards. In fact, at the genome wide scale – across most of the leopard’s 2.5 billion DNA bases – Asian leopards are more genetically separated from African leopards than brown bears are from polar bears.

Adding to the puzzle is the comparatively recent divergence of African and Asian leopards, approximately 500,000 to 600,000 years ago, which is comparable to that between modern humans and Neandertals. Brown bears and polar bears, in contrast, diverged around 1 million years ago.

The cause of this genetic differentiation of Asian leopards is their out-of-Africa dispersal. Although the evidence suggests that leopards in south-western Asia carry DNA that’s relatively similar to African leopards, which could be due to occasional interbreeding, the overall distinctiveness of leopards on the two continents has been maintained. We would have expected Asian and African leopards to show more similarities in their DNA, as there has been (and possibly still is) mixing between the populations.

This level of separation is unexpected within a single species. Such a genetic distinction is not even always clear between different species. It also shows a brief event with relatively few individual leopards – the out-of-Africa dispersal – has had a massive influence on shaping the genetic patterns of these animals across the world.

A second important result is that African and Asian leopards have had a very different population history since their separation. African leopards show higher genetic variability, and their populations are less genetically distinct from one another.

In Asia, there’s a much stronger effect of geography, meaning that the correlation between genetic distance and geographic distance is stronger. Leopards are generally genetically more similar to other leopards that live close by, than those that live far away. This suggests less gene flow and dispersal between different parts of the continent than in Africa.

Despite the extensive encroachment by humans on leopard habitats, the historical samples didn’t necessarily have a higher genetic diversity than the modern samples included in the study. This shows that the differences we see in Asian leopards is not due to recent human impacts. Although humans have driven some local leopard populations to extinction, the impact of humans on the species as a whole is not yet severe enough to be reflected in the entire genome.

The leopard samples from the museum shelves have given us valuable new insights into their evolutionary history, as well as current populations across the world – even populations we’ve driven to extinction. Leopards are listed on the IUCN red list of “threatened species”, and classed as critically endangered for some of their range.

Considering the impact we humans have had on wildlife in recent centuries, there may be many species for which there are exciting genetic discoveries hidden among the shelves of natural history museums around the world.