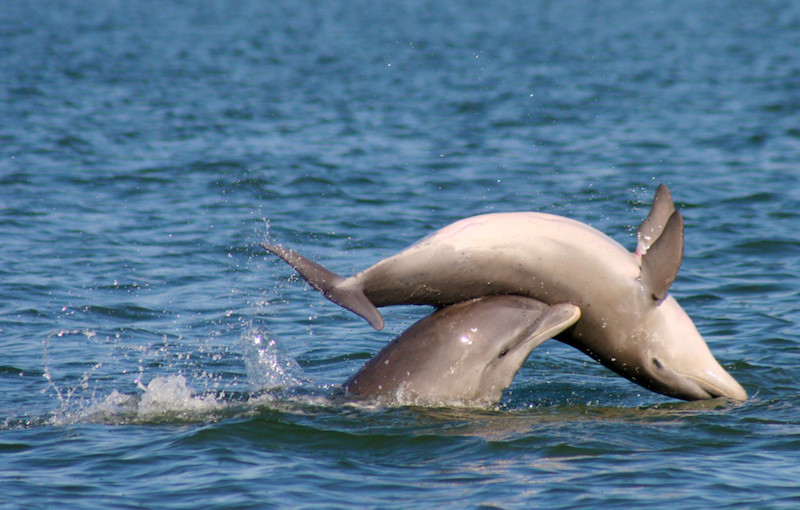 Marine ecosystems are endangered by an increasing number of coastal development projects. A new study shows for the first time that bottlenose dolphins may adapt to anthropogenic disturbance under some circumstances. The findings draw attention to the need for proper management of coastal construction sites.

Two of the most damaging human practices are dredging and pile driving. Dredging, the removal of sediment and debris from bodies of water, is lethal to fish eggs and larvae. Pile driving causes severe noise pollution, which interferes with the behaviours of marine wildlife. Many fish species and cetaceans depend on sound to navigate, search for prey, avoid predators, and communicate with conspecifics.

These practices and their effects lead to stress, fatal stranding, and acute avoidance in cetaceans. Due to unprecedented levels of construction, coastal zones are becoming the noisiest and most endangered ecosystems on the planet. Plus, as these activities never happen individually, they can have cumulative effects.

The effect of coastal development on bottlenose dolphins

Bottlenose dolphins are strongly tied to their coastal habitats and are more vulnerable to human pressures, as it exposes them to the greatest number of cumulative effects. Dr Ann Weaver, John’s Pass Dolphin Study/Jaasas Academic Press, Florida, researched how bottlenose dolphins were impacted by a bridge replacement project in John’s Pass, St Petersburg in west central Florida. John’s Pass is a narrow tidal inlet connecting the Gulf of Mexico and the Intracoastal Waterway, and served as prime bottlenose dolphin habitat because it provided rich feeding grounds. The bridge replacement project occurred in 2 phases over a 5-year period.

The construction project included pile driving and dredging and brought about light and noise pollution. The study showed two ways in which dolphins appeared to adapt to these human activities. First, the dolphins stopped using John’s Pass as a feeding ground, instead shifting to areas outside of the construction zone. This adaptation also led to a decrease in social interactions between dolphins in the construction zone. These behavioural changes remained across the 5 years after construction was finalised, and never recovered.

Weaver concludes: “These results provide a two-sided key to managing future coastal construction projects by mandating the following conservation policies. First, study the wildlife before construction begins to learn their habits. Second, apply that knowledge: Plan coastal construction activities accordingly to give them a chance to adapt and help the dolphins maintain their historic habits as much as possible.”