Home » Migration routes of one of Britain’s largest ducks revealed for the first time, but much still remains a mystery 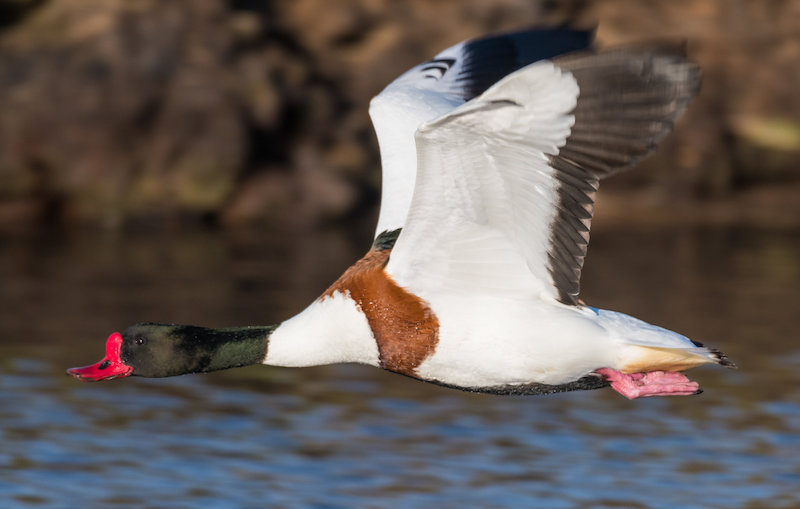 New research, just published in the journal Ringing & Migration, has used state of the art tracking technology to investigate how one of Britain’s largest ducks, the Shelduck, interacts with offshore wind turbines during their migration across the North Sea.

Their findings reveal – for the first time – the length, speed and flight heights of this journey.

Offshore wind farms are a key part of many governments’ strategies to reduce carbon emissions and mitigate climate change impacts. However, it is important to understand how they might affect wildlife.

The risk of colliding with wind turbines, is a particular concern to migratory species travelling across the sea, and there is also a potential increased energetic cost if wind farms act as a barrier that migrating birds must fly around.

The majority of British and Irish Shelduck undergo a ‘moult migration’ to the Wadden Sea, which runs along the coasts of the Netherlands, Germany and Denmark. They make this journey every year in late summer, after they have finished breeding.

Once there, they replace their old and worn out feathers and become flightless in the relative safety that the Wadden Sea offers, before returning to Britain when their moult is complete. However, in journeying to and from the Wadden Sea, Shelduck must cross the North Sea and navigate its growing number of wind farms en route.

Scientists from the British Trust for Ornithology (BTO) used state of the art tags to track four Shelduck from the Alde-Ore Estuary Special Protection Area on the Suffolk coast to the Wadden Sea. Each bird took a separate route across the North Sea, and used previously unreported stopover sites in the Dutch Wadden Sea, before continuing on to moult sites in the Helgoland Bight off the coast of Germany. Incredibly, one bird travelled back and forth between the Dutch and German Wadden Seas four times, adding an extra 1,000 km to its migratory journey. The reasons why remain a mystery.

Ros Green, Research Ecologist at BTO and lead author on the paper, said, “Having a working knowledge of species’ migratory movements is an essential first step in understanding the risks that offshore wind farms may pose to populations of Shelduck and other species. Further, our tags provided data on Shelduck flight speeds and height, giving additional vital information on the magnitude of the risks posed by developments.”

She added, “It is well known that British and Irish Shelduck populations move back and forth across the North Sea each year, but this is the first published data on the specific routes taken, how long the migration takes to complete, and how fast and high Shelduck fly.”

The four Shelduck were fitted with solar powered GPS-GSM tags, allowing BTO scientists to follow their migratory movements in great detail and in almost real time, as the GPS data are downloaded over mobile phone networks. Incredibly, although all four birds took very different routes across the North Sea, they all ended their migration in almost exactly the same place in the Dutch Wadden Sea. During the crossing, the birds flew at speeds of up to 55 knots, and up to 354 m above the sea’s surface.

The movements recorded indicated apparent interactions with several wind farm sites, though most of these are currently only at the planning phase. Only one data fix was recorded within an operational wind farm when a bird flew within the Egmond aan Zee wind farm. This Shelduck was flying at a height of 85 m, which would place it at potential risk of collision with the wind farm’s spinning turbine blades, which sweep an area between 25 and 139 m above sea level.

Indeed, the majority of the four Shelducks’ flight occurred below 150 m above sea level, which would place them in the ‘collision risk zone’ of many of the offshore wind farms they may pass through.

The BTO team plans to extend the tracking project and collect more data to investigate whether Shelduck are actually at risk of collision, or whether the population can adapt to this essential renewable energy infrastructure.

“Further work”, the research team add, “is also needed on tagging approaches in order to extend the deployment period beyond the main moult, and capture data on the return migration. A larger sample size of tracked birds is needed before firm conclusions on Shelduck migration can be drawn. Ideally this would include birds from a wider geographical range of British breeding sites, as well as Shelduck that breed on the continent but migrate to Britain for the winter.”