Home » Bat surveys: When to call it a night 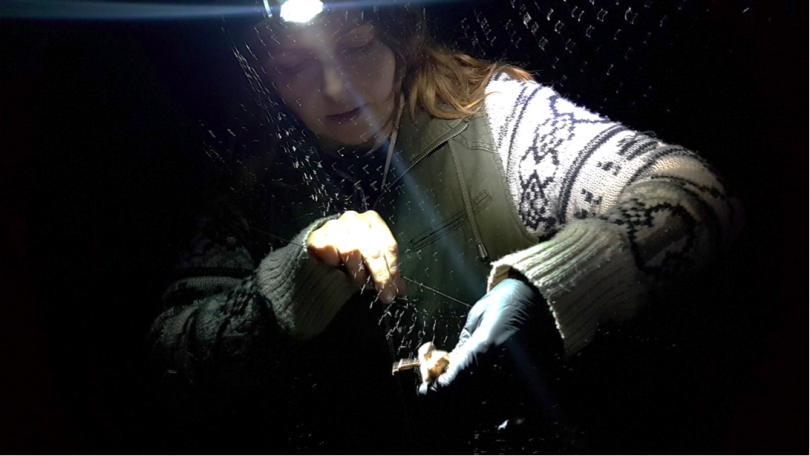 It’s been a while since there has been an update on the Urban Bat Project here in Inside Ecology. Back in the summer of 2018, Inside Ecology hosted a regular column over the course of the bat survey season in which we undertook a number of different types of surveys, including Advanced Licence Bat Survey Techniques (ALBSTs) comprising mist netting and harp trapping. Following two field seasons, our team began to look in detail at our survey efficacy, as unlike other survey types, there is a lack of precise guidelines indicating how much survey effort is required to gain an accurate picture of the species assemblage of any given site using ALBSTs. This gap in available guidelines is actually more problematic than one would first assume, and while we go into some detail in our recently published paper in Lynx, n.s., there are two primary reasons:

The first is that resources (money, equipment, availability of licensed surveyors and time) are finite, and especially where trapping work is often undertaken by non-profit organisations (i.e. local bat groups), it is important to know how much survey effort is required. At what point does survey effort reach a point of diminishing returns, where a survey team would gain more data (or at least more meaningful data) by moving on to new survey sites? At what point can a survey team be confident of having recorded the majority of a site’s readily-caught species, but beyond which there would be diminishing returns for survey effort? When should we call it a night?

The second reason is perhaps even more important as it has implications on bat welfare. In the early part of survey effort, as you might expect, common species dominate the catch. However, these species (e.g. common and soprano pipistrelle, brown long-eared, noctule and Daubenton’s bats) are often readily identifiable using acoustic monitoring. In order to begin catching bats which can only reliably be identified in the hand (cryptic species), or the target is rarer species (e.g. Bechstein’s or barbastelle), survey work would have to continue past the point where common species dominate the catch. That is the point beyond which a survey must continue in order to justify the collateral disturbance to common species.

Notwithstanding, there are a lot of other factors involved, and plenty of cases where catching common species is the aim of a survey (e.g. species-specific surveys, DNA sampling or ringing schemes); however, catching common bats, even if morphometric and breeding condition data are gathered, is very hard to rationalise if those data are only gathered on an ad-hoc basis, or altruistically in hopes that someone else may use them at a later date. Essentially, ad-hoc trapping of sites in a non-systematic way, or simply ‘throwing up some nets to see what’s about’ for single nights both have serious ethical implications.

Read more: Bats of the ‘Burbs: Studying bats on the urban fringe

So, after 56 surveys at 11 sites, catching nearly 400 bats, and using all known data about the species assemblages of those sites (gathered from trapping, existing records and sound analysis), we examined our data in order to calculate two values:

To determine MST, we looked at encounter rates (Figure 2) which we corrected for mean published emergence times per species. These told us at which encounters we were statistically more likely to catch common rather than rare species: Encounters 1 and 2. At Encounter 3, we were as likely to catch common as rare species, and the point where we began to catch more rare than common was at Encounter 4. So, the MST should be set at the mean point (across all surveys) where this threshold was likely to be passed and the fifth species encounter reached.

Determining KST was more complex as it can be modified to take into account geography, the likely assemblage of bats roosting or utilising the site and the percentage of those species likely to be caught (as some species are less often caught due to their behaviours). We set this value at 75%, as 9 of our 12 county species are likely to be caught in traps, and we used the county assemblage as an analogue for its woodlands (this can be modified dependant on survey aims and area assemblages). We then used species accumulation curves to plot catches against a MST value of 5 species and KSAs of 75% of the known assemblage for each site. The means of these values give us a window for our optimal survey effort going forward (Figure 3).

You can read the detailed results in the Lynx paper, but in summary, our data revealed that the MST of four species would be passed during the second survey, with the fifth species encounter being reached, on average after 17.4 net hours (i.e. 12m of net deployed for one hour). The KST of 75% of known assemblage would be reached, on average, towards the end of the third survey after a mean of 29.8 net hours.

This indicates that three full surveys is likely to be the ‘sweet spot’ balancing effort with ethics. (Notably, three surveys is also the maximum survey effort for a site that is covered by Class 3 and 4 Natural England bat survey licences before project licences are required.)

Having said that, it should be considered that the KST is a minimum threshold, representing the point at which a team may START to catch rarer species. Of course, it is in the long hours that sometimes our effort is paid off with those elusive or trap-avoiding species, and it is thanks to the willingness of my volunteers to push past these thresholds that has enabled us to rediscover Brandt’s bat in our county (thought locally extinct) and to completely change the county distribution maps of lesser horseshoe and Natterer’s bats. Of course, as Carl Sagan said, “absence of evidence isn’t evidence of absence”, and pushing past the KST is where the rare gems may be found.

About the Authors: Morgan Hughes is an ecologist and PhD candidate specialising in bats. After growing up in south Florida, she returned to her native UK to attend university, where she currently lives and works. She is the county bat recorder and Bat Atlas Project coordinator for the Birmingham and Black Country Bat Group, a visiting lecturer at the University of Wolverhampton’s Animal Behaviour and Wildlife Conservation course and the coordinator of the Urban Bat Project. You can find her on Instagram and Twitter.

Scott Brown is an ecologist specialising in bats with a keen interest in herptiles and badgers. Originally an electromechanical engineer, Scott left his previous job to survey pastures new and completed his bachelors degree at the university of wolverhampton in Animal Behaviour and Wildlife Conservation. Scott is a full time consultant ecologist at Tyler Grange ltd., the lead research assistant on the Urban Bat Project and a committee member of the Birmingham and Black Country Bat Group. You can find him on Instagram.