Home » How hybrids could help save endangered species 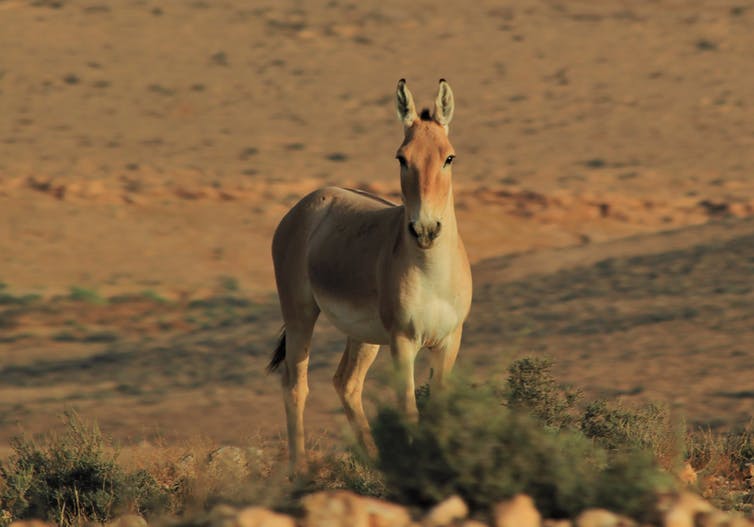 What do you get when you cross two distinct lineages of an endangered species? For scientists hoping to revive an extinct population in Israel, the answer was a lucky accident – one that could upend longstanding ideas about how best to preserve biodiversity.

The Asiatic wild ass is a relative of the donkey that, as the name suggests, was never domesticated. This truly wild animal lives in the steppes and deserts of western and central Asia, from the Mediterranean to Mongolia. Because they vary slightly in size and colour (ranging from a pale sand colour to a dark ochre), Asiatic wild asses have been classified into five distinct subspecies: Mongolian, Indian, Iranian, Turkmen, and Syrian. The latter once roamed the Middle East, but overhunting drove it to extinction in the 1920s.

Hoping to return this species to the Negev desert, Israel started a reintroduction programme in 1968. The idea was not to resurrect the extinct Syrian wild ass, but to introduce an equivalent that was as similar as possible, which would fill the ecological role of the departed subspecies. And so, Israel imported 11 Asiatic wild asses from zoos in Iran and Europe.

Perhaps confusion regarding the species’ taxonomy was to blame, but the 11 imported asses weren’t all alike. In fact, they belonged to two different subspecies from Iran and Turkmenistan. And accidentally, a mixed breeding population was established in the HaiBar Yotvata reserve in Israel that created an entirely new hybrid ass.

Intentionally crossing two different subspecies risks creating offspring which are less healthy or viable. But, remarkably, this accident seems to have paid off. In new research, we studied the genetics of the hybrid population and showed that mixing the subspecies might have actually helped make the reintroduction a success.

Separate species and subspecies are genetically distinct. If they’re too different, their hybrid offspring are likely to be much less healthy than the parents. Genetic incompatibilities between horses and donkeys mean that their hybrids – mules and hinnies – are infertile. Subspecies are more genetically similar than species and less likely to experience this problem, but there are other issues.

Different subspecies of the same species might have unique genetic adaptations that they’ve evolved in order to thrive within their particular environments. By crossing them, the next generation will carry fewer of these adaptations and might struggle as a result. Imagine crossing a tiger from Siberia with one from Sumatra – the genetic make-up of the offspring may make them less comfortable than their parents in either snowy northern climes or tropical rainforests.

But mixing different populations can also help counteract the problems of small population sizes. Many endangered species persist in small and isolated populations and as a result, lose their genetic diversity through inbreeding and a random process called genetic drift. This spells danger for the whole species, as low genetic diversity means a lower potential for coping with sudden change, like a hotter climate or a new disease.

Think of it like playing scrabble, but your tiles contain just two letters. Your options are severely limited. A greater diversity of letters would give you much more flexibility to respond. Mixing subspecies seems to have given the reintroduced Israeli wild asses a more diverse genome.

Return to the Negev

In Israel, the population of Asiatic wild asses grew rapidly from 11 founders in a mixed breeding group in 1968 to around 300 wild animals today. A fast-growing population is a sign of health. But starting with a small number of founder animals risks creating a reintroduced population with very low genetic diversity. Over time, this could cause it to shrink or even collapse.

We performed a DNA analysis to learn more about the genetic makeup of this population and its chances of persisting in the long-term. We found that all tested individuals of wild ass roaming the Israeli desert today are genetic hybrids and inherited half of their genes from each of the two subspecies.

This is more surprising than it sounds. If genetic incompatibilities between two subspecies usually make hybrids less healthy or fertile, we’d expect them to produce fewer foals than wild asses of pure subspecies ancestry. So, after several generations, we’d still expect to see some purebred asses, as they’re presumably better suited to breeding healthy young than the hydrids. Yet we found no purebreds, suggesting there were no genetic barriers to interbreeding.

More importantly, the hybrid population became more genetically diverse over time. This may explain the population’s rapid growth, and indicate that Israel’s wild ass population is well-prepared for future challenges like disease and climate change.

The reintroduction in Israel is a rare success in the conservation of Asiatic wild asses. Other re-introductions have used only one subspecies and most of them have failed.

When 11 Turkmen wild asses were reintroduced to a reserve in Turkmenistan, the resulting population lost much of its genetic diversity over four generations. To date, only five out of 18 attempts to reintroduce wild asses have succeeded, including the one in Israel.

Despite the potential benefits, many conservationists oppose mixing different subspecies as it means sacrificing genetic purity, which some consider a precious component of a population’s overall value. But our work suggests that focusing on genetic purity might not be the best strategy for saving an endangered species from extinction. Carefully assessing the potential risks is important, but hybrids can also form resilient populations with realistic chances of long-term survival.

Header image: A hybrid of the Turkmen and Iranian wild ass, introduced to Israel in 1968. Credit: Lilith Zecherle, Author provided.