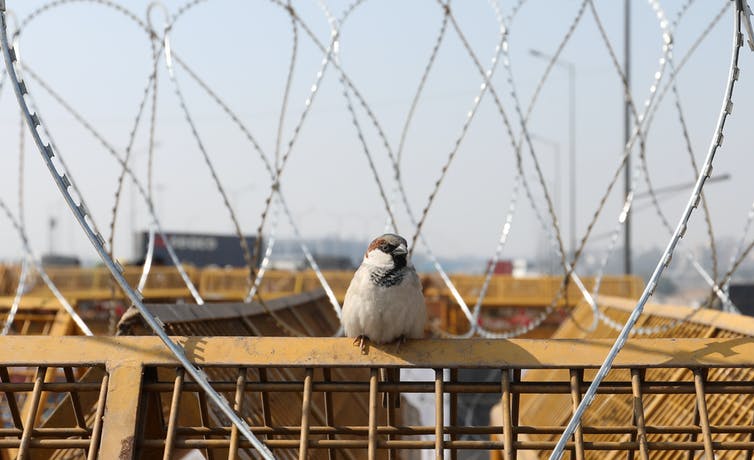 Whether it’s blackbirds in Sweden, moths in Borneo, or mice in California, animals around the world are on the move thanks to climate change. Species are shifting higher up mountains and closer to the poles as global temperatures rise, following the climate conditions to which they’re adapted. Their futures depend not only on their changing natural environment but the countries in which they happen to live.

As conservation scientists, we need to know how species will move between countries to understand how they’re likely to fare. National borders define where the authority of laws and policies begins and ends, so a species living on one side of a border can sometimes expect very different levels of protection – and very different threats – compared to one living on the other side.

But national borders have become increasingly fortified over the last two decades. Walls and fences erected to control immigration don’t just affect humans; they present an obstacle to all kinds of animals seeking safe habitats as the planet warms.

Our new study simulated how 12,700 bird and mammal species might move between countries as a result of global warming between now and 2070. We found that the ranges which 29% of birds and 35% of mammals currently occupy are likely to shift so significantly in that time that more than half of their distribution will fall in countries they’re not currently found in. Most of these cross-border movements of species will be in the western Amazon, around the Himalayas, and in central and eastern Africa.

Between a wall and a hot place

Walls and fences now cover more than 32,000km of the world’s political borders. Placed end to end, the combined structure would nearly circle the Earth. Fences are generally bad for wildlife as they break up habitats and animals can get tangled in them. But border walls are on another scale entirely, dividing entire regions or even entire continents in two.

Most birds and bats will have no problem flying over borders, though some low-flying species might struggle. Others may be reluctant to cross even small areas of border habitat if they’re put off by the lack of trees, human noise or artificial lighting. Mammals that can’t fly are of greater concern. We estimated that almost 700 species could be prevented from moving into new countries to escape intolerable temperature rises as a result.

Three border barriers are particularly worrying. The US-Mexico border – which alone could trap 122 mammal species in either country – the India-Myanmar border, and the border between Russia and China. The first two are still under construction, but their completion will prevent many species passing safely.

Centuries ago, jaguars are thought to have been widespread in the southern states of the US, but now they’re largely found south of the US-Mexico border. This solitary feline predator is likely to spread north again as the climate changes, but an increasingly fortified border with the rest of North America could impede its passage.

Sloth bears – familiar to many as Baloo from The Jungle Book – and Indian pangolins are set to face the same problem when trying to cross between India and Myanmar. Walls and fences along borders in Africa and the Middle East could affect cheetahs and leopards, while barriers in central Asia could interrupt the migration of the critically endangered Saiga antelope.

Our modelling also showed that the largest proportion of species will be lost from tropical regions. Here, species are adapted to more stable climates and so are most sensitive to rising temperatures. Many of the countries most affected tend to be poorer, with weaker systems of governance and less responsibility for the emissions driving climate change in the first place. Conservation efforts to save species might be harder to fund and enforce in these hardest-hit places.

This also raises important questions of international justice. Via their greenhouse gas emissions, wealthier countries are effectively exporting species extinctions – and all their ramifications – to less wealthy countries. Limiting the cross-border movements of wildlife will only exacerbate the problem.

Our research shows how important it is to ensure habitats stay connected across borders, whether security measures are present or not. Where walls and fences exist, governments must minimise their effects by ensuring they are as permeable to wildlife as possible. Or they should create wildlife passage points, such as bridges and other crossings, that can circumvent these unnatural barriers.

In an era of rapid global change, policymakers must zoom out from their usual national focus to ensure they protect species wherever they live, and wherever they need to move. Ahead of the UN’s COP26 climate conference in November 2021, our findings underscore the importance of deep and swift cuts to greenhouse gas emissions. This is the best way to reduce the effects of climate change on the wildlife we share our planet with, and the best way to relieve the unfair burden of biodiversity loss on the least culpable parts of the world.