Home » How and what do bats hear? 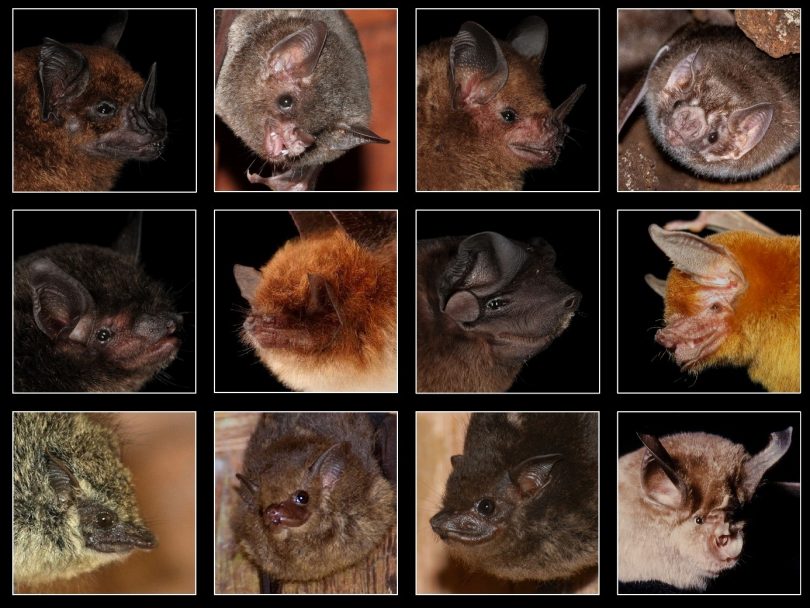 A new study published in Proceedings of the Royal Society B provides the most comprehensive comparative assessment of bat hearing capacities to date and highlights the evolutionary pressures acting on their sensory perception. Scientists from the Museum für Naturkunde Berlin studied bat hearing in both high and low frequency ranges used for echolocation and social communication and demonstrated that hearing sensitivity is equally good at both ranges. Moreover, a phylogenetic comparative analysis showed that changes in hearing sensitivity evolved in response to frequency changes of both echolocation and social calls.

Bats live in a world of sounds. As auditory specialists, they rely on high-frequency echolocation calls to perceive the world, but also detect social calls and other environmental sounds at lower frequencies. Echolocation and social calls do not only differ in frequency (pitch) but also in amplitude (loudness): echolocation calls are normally louder than social calls but the calls’ returning echoes can be very quiet. Even though bats are a particularly interesting taxon for research on auditory perception, comparative studies are scarce.

Scientists from the Museum für Naturkunde Berlin, Mirjam Knörnschild and Martina Nagy, teamed up with researchers from the LMU Munich and the MPI for Psycholinguistics in Nijmegen to study how evolutionary pressures shape the sensory perception of bats. They assessed the hearing sensitivity and amplitude coding of 11 neotropical species using a minimally invasive technique that did not harm the bats. The scientists showed that amplitude is more finely coded for high-frequency echolocation calls than for low-frequency social calls. “This difference is probably related to the bats’ need to encode the wide range of amplitude differences in echolocation calls and their echoes”, Mirjam Knörnschild explains. In contrast to amplitude coding, the bats’ hearing sensitivity is equally good at both high and low frequency ranges. “Intriguingly, in some species, females have higher hearing sensitivity than males in the low frequency range”, Martina Nagy adds. “This enhanced sensitivity may be adaptive because young bats produce low frequency isolation calls to solicit care from their mothers.”

The scientists combined their original data with published information on 27 additional bat species in a phylogenetic comparative analysis and demonstrated that species-specific peaks in hearing sensitivity correlate with peak frequencies of echolocation calls and pup isolation calls. “This indicates that changes in hearing sensitivity evolved in response to frequency changes of both echolocation and social calls”, Mirjam Knörnschild points out.

These findings are relevant beyond bats. Other species, especially other echolocating taxa such as whales, probably also show an adaptive correlated evolution between peaks in hearing sensitivity and important call frequencies. The scientists hope that their results provide an incentive for the in-depth investigation of evolutionary pressures acting on the sensory perception of echolocation taxa in general.