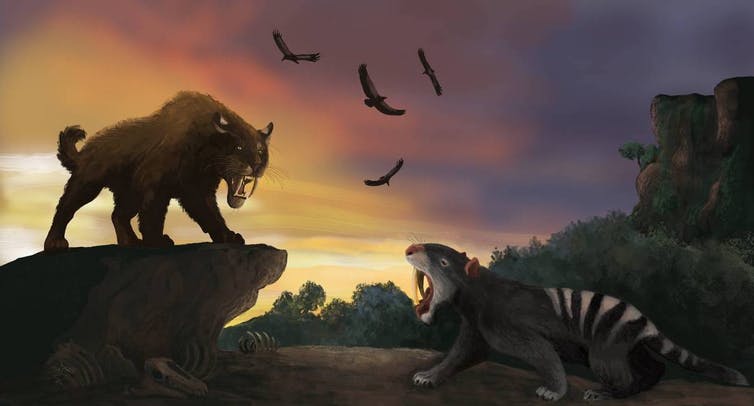 We think of today’s South American mammals as being very different from North America’s. But almost half of the southern mammals actually have ancestors of relatively recent North American origin, including such familiar beasts as llamas or tapirs. In contrast, only a paltry few southerners made it past the Central American tropics and into the rest of North America, including armadillos, porcupines and opossums.

This mysterious asymmetry has been newly addressed by an international team of scientists, headed by Juan Carrillo of the French Museum of Natural History, using sophisticated statistics and a database of around 20,000 fossils. Their findings, now published in the journal PNAS, are illuminating and unexpected.

First, some history of the science. For most of the past 200 million years North and South America were separated by an ocean and housed their own distinct and separately evolving faunas. However, as tectonic plates shifted and underwater volcanoes erupted, the Isthmus of Panama emerged from the sea around 3 million years ago. This formed a land bridge that allowed for animal migration in both directions: this was the Great American Biotic Interchange, one of the classic examples of intercontinental exchange in evolutionary history.

Before the interchange mammals on the two continents were very different. North American mammals were not too dissimilar to the rest of the Northern Hemisphere, but the South American ones were more distinct. Unique to that continent were xenarthrans (tree sloths, anteaters and armadillos), indigenous types of ungulates (hoofed mammals), and marsupial carnivores (sparassodonts). Today, only some smaller forms survive among the original natives – opossums (marsupials) and xenarthrans – along with monkeys and certain rodents (ancestors of forms like capybaras) that migrated there from Africa some 40 million years ago.

The migrating mammals included many that are now extinct such as giant ground sloths, and the immigrants diversified profusely on both continents. But the interchange eventually favoured the northerners who moved south and came to dominate the South American fauna. So why did the southerners falter?

A century or more ago this asymmetry was seen as an example of “superior northerners” outcompeting “inferior southerners”, a relic of the dubious history of human colonialism. Since then, science has become more civilised and four main explanatory hypotheses (not necessarily mutually exclusive) have been proposed. Each has found support in previous, less comprehensive, studies.

Two hypotheses consider the issue to be a greater movement of mammals from north to south than vice versa – either a greater rate of dispersal, or a larger pool of northern mammals to make the journey. Two other hypotheses propose different fates of the immigrants – either the northerners diversified more in the south, or the southerners eventually suffered more extinctions on both continents.

When the Carrillo-led team used their new data and techniques to test the different hypotheses, they found that only one could be supported: the greater extinction of the originally South American mammals. But their results had a surprising twist. While scientists had previously focused on the extinctions at the end of the last ice age – such as the elephant-sized giant ground sloths that only went extinct as recently as 10,000 years ago – the new analysis targeted a much earlier wave of extinctions, one starting millions of years earlier.

Climatic change over the past 12 million years or so, from a warmer world to the cooler, ice-age world of the relatively recent past, affected mammals across the world. But it seems that South American mammals were particularly badly affected by around 5 million years ago. Thus, when the possibility to migrate to and from North America presented itself, extinctions had already reduced the pool of available travellers from south to north.

The sparassodonts and native ungulates were already largely gone. Their extinction was originally blamed on competition with the newly-arriving northerners, but better data and analyses inform us that the supposed competitors probably never even met. The abundance of South American carnivores today, including the fox-on-stilts maned wolf, the otter-cat jaguarundi and the lemur-like kinkajou, is not testament to placental carnivores being superior to marsupial counterparts: rather, their ancestors invaded essentially virgin territory, which the previous occupants had already vacated, and then diversified into wonderous new forms.

This new study provides a better understanding of the dynamics of the Great American Biotic Interchange. It gives us an explanation for the predominance of originally northern mammals in present-day South America, and it aids our understanding of biodiversity and species distributions. But, like all good science, it leaves us with further questions: why were the earlier mammal extinctions in South America so devastating? Hopefully Carrillo and co. will next turn their plethora of fossil data and analytical wizardry to this intriguing issue.