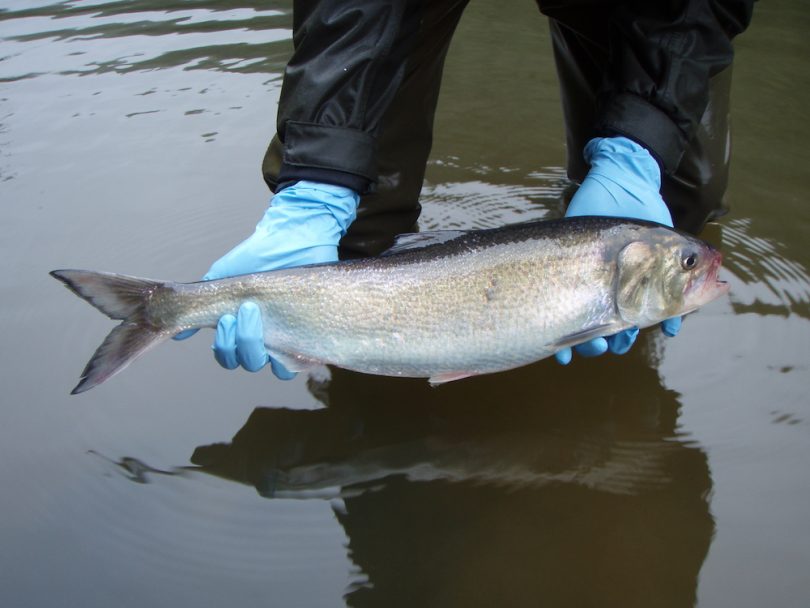 In this article, Dr Peter Walker MIFM, Associate Director, RSK Biocensus Ltd, takes a closer look at the May fish …

May fish is another name given to shad because of the time of year that they typically start to appear in UK rivers before spawning. The shad’s other common names include the ‘king of the herring’ and even the ‘bony horseman’.

Throughout my time as an aquatic ecologist, I have had some incredible opportunities and experiences while working with wildlife in both the UK and abroad. Several years ago, I was involved in a series of projects that provided an opportunity to work with shad. This enabled me to witness shad spawning behaviour in the River Usk, to battle adult fish on rod and line (thanks to a special project licence) and to see huge numbers of juvenile shad congregating in back waters or marginal slacks on the rivers Wye and Usk during seine netting operations.

Two species of shad are known to occur in UK waters: the twaite shad (Alosa fallax) and the allis shad (A. alosa). Both species are diadromous, or more specifically anadromous, which means that mature adults migrate from the sea up into rivers to spawn and juvenile fish return downstream and out into estuaries and the open sea to grow.

Shad are notably athletic and undertake significant migrations from the sea to reach their river spawning grounds. During these journeys, they may have to overcome numerous threats and obstacles, including predators and in-river structures ranging from natural, shallow riffles, rapids and small cascades to large man-made structures such as weirs.

According to Aprahamian et al. (2003), the numbers of both UK shad species have declined significantly. Allis shad used to have strongholds in the Severn catchment but it is thought that viable breeding populations no longer occur there (Carstairs, 2000). Within the UK, allis shad may now only spawn in the Tamar Estuary (Hillman, 2003), although there are historic records of a potential spawning population in the Solway Firth area (Maitland and Lyle, 2001).

The presence of man-made barriers in rivers is preventing adult fish from reaching their spawning grounds (e.g., Aprahamian et al., 2003). Despite their physical capabilities, shad are known to have difficulty in negotiating their way past in-river obstacles, especially if they cannot do so in groups or if there is plunging flow over the structure rather than streaming flow.

Water quality issues and the siltation of spawning grounds may also have contributed to the decline of shad. Additionally, it is likely that entrainment at water abstraction sites, particularly of juvenile fish, will have had and continues to have a part to play in the reduction in shad numbers.

Shad are a delicate species and incredibly sensitive to handling. Although it is illegal for recreational anglers to try to catch shad, when shad are in UK rivers while migrating to their spawning grounds, small numbers are accidentally caught by anglers fishing for other species. Fish that are subsequently netted or handled by these anglers often do not survive the ordeal. This impact is likely to be insignificant compared with the effects of in-stream obstacles, entrainment and pollution but it is, nonetheless, something for government agencies to consider in the future. A blanket ban or a request for voluntary abstention from fishing in rivers where shad spawn during their main spawning period is one possible option, although this should not distract from the bigger issues affecting shad.

When looking at ways to help threatened species, a focus on habitat quality, availability and accessibility is paramount. Improving, or at least maintaining, the freshwater habitats used by twaite and allis shad in the UK is, therefore, essential to ensuring the survival of the species in UK waters. Of course, it is also important to consider all the life stages of the species and not to focus just on the habitat requirements for larval or adult stages, for example.

Adult shad require unimpeded passage throughout the river systems that they use for spawning. As they ascend rivers, they congregate in deeper pools where they often remain for a period before moving on to the shallower spawning areas. Consequently, these deeper pools ideally need be located immediately downstream of spawning sites. Notwithstanding this, deeper resting pools are also necessary throughout the river downstream of the spawning areas to provide resting places for upstream migrating fish.

Shad need silt-free, clean gravel for spawning, as this ensures that eggs have an adequate supply of oxygen and that the developing embryos do not suffocate. Caswell and Aprahamian (2001) state that shad spawning habitats in the rivers Wye, Usk, Tywi and Teme comprise

On emerging from their eggs, young shad need access to areas of reduced current such as backwaters and back eddies where they can seek refuge from faster flows and feed during their downstream migration. The salmon croys abundant along much of the River Wye provide many such refuge areas for juvenile shad and other juvenile fish (personal observations).

What is being done to help shad?

Trying to maintain and, ultimately, restore UK shad populations is a significant challenge. Nevertheless, there is sufficient knowledge about allis and twaite shad, and other shad species, to inform efforts within the UK.

Several organisations are actively engaging in river management activities that may help to improve UK shad populations. Natural England has recently been researching shad spawning habitat in the River Tamar and its estuary to try to improve understanding of the situation for shad there. The Severn Rivers Trust, a remarkably active river conservation charity, has recently teamed up with the Canal & River Trust, the Environment Agency and Natural England to undertake an ambitious project in the Severn catchment that, if successful, could reopen much of the catchment to shad and other fish species (see www.severnriverstrust.com/projects/unlocking-the-severn).

Most of the efforts to try to improve shad populations in the UK have focused on helping shad to migrate upstream to reach their spawning grounds in a fit state to reproduce. This has largely involved removing in-river structures or constructing fish passes at structures that prevent or hinder the upstream movement of these fish. However, water quality and the impacts of water abstraction facilities should be neither forgotten nor underestimated.

In addition to improving the situation for upstream-migrating adult shad, we must not forget to ensure that suitable conditions are available for juvenile shad to survive their downstream migrations. This includes ensuring the availability of refuge areas and addressing issues such as water quality (a hot topic for rivers such as the Wye, www.wyeuskfoundation.org/news/its-the-sunshine-stupid) and addressing the impact of water abstractions and the entrainment of juvenile fish, including shad.

Like many of the UK’s fish species, shad have been heavily affected by people and their activities for decades and they continue to be so today. Barriers to migration, habitat modifications, water quality issues (including runoff from agricultural land) and abstraction are all serious, ongoing problems that need addressing if shad and other native fish species are to thrive in our rivers.

It is not all doom and gloom, however. Initiatives such as the Severn Rivers Trust’s ‘Unlocking the Severn’ project provides significant optimism about the future of UK shad populations. Other organisations such as the Wye and Usk Foundation also continue to lobby government and water companies to act regarding water quality and abstraction issues. If successful, the actions of these organisations could result in positive changes that may, in turn, lead to a recovery of shad populations.