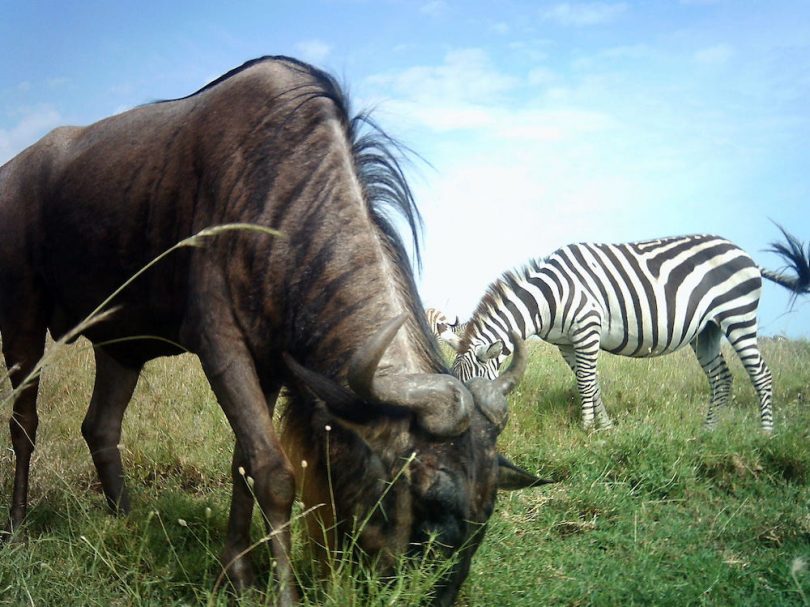 Meals are typically family affairs for zebras, gazelles, cape buffalo and other grazing species in the African Serengeti, but in one of the first studies of its kind, ecologists have found grazing species can be more willing to share meals in areas frequented by lions.

The study, which is available online this week in the journal Ecology, was conducted by a team from Rice University, Princeton University, Wake Forest University and the University of Minnesota. They analysed more than 115,000 camera-trap photos to see where, when and how often six of the Serengeti’s most abundant grazing species — cape buffalo, gazelle, hartebeest, topi, wildebeest and zebra — formed mixed-species groups.

“The mixed-species groups occur near places where lions like to hunt, which suggests the grazers are trying to reduce their chances of being killed by predators,” said Rice lead-author Lydia Beaudrot.

Mixed-species groups of grazers were found in 1.9% of the camera-trap photos, which were collected between 2010-2015 in Tanzania’s Serengeti National Park and processed by volunteers for the citizen science website snapshotserengeti.org. Camera-trap findings were combined with information from long-term GPS collar monitoring by the Serengeti Lion Project and satellite imagery that showed both the location of hunting areas favoured by lions and where and when food was plentiful or scarce for grazers.

“Mixed-species groups were most likely in ‘risky’ places, like woodland habitats and near rocky outcroppings that lions use as viewsheds,” said Beaudrot, an assistant professor of biosciences.

But the threat from lions apparently isn’t the only thing grazers have to consider.

“One of the most interesting results is that grazers in mixed-species groups appear to be making a tradeoff between the risk of being eaten and the need to eat,” Beaudrot said.

Mixed-species groups were less likely to form when plant productivity was low, she said, which suggests there is a foraging cost associated with mixed-species grazing, said study co-author Meredith Palmer, a behavioural ecologist and postdoctoral fellow at Princeton.

“These animals face a trade-off,” Palmer said. “When different species group together, each individual is less likely to be eaten by a lion than it would be if it were alone or even possibly with its own species. But each individual is also foraging, and if they get further apart they don’t have to compete as much for food. As forage becomes more scarce, these animals have to decide whether the extra food they would get from grazing alone is worth the increased danger from lions.”

The study focuses on a longstanding idea in ecology called the ‘stress gradient hypothesis,’ which holds that species are more likely to compete with one another when times are good and more likely to benefit each other when they’re under stress, Beaudrot said.

“The hypothesis is supported by the findings from more than 700 plant studies, but it’s rarely been applied to animals because mixed-species behaviour is rare and there typically aren’t enough data about it to draw statistically significant conclusions,” she said.

The collaboration began when Beaudrot heard Palmer describe the Snapshot Serengeti database in a talk at the 2018 Gordon Research Conference on Predator-Prey Interactions. While mixed-species groups had previously been documented in animals, including primates, cetaceans, ungulates, fish and birds, Palmer and Beaudrot realised that the size of the Snapshot Serengeti camera-trap database would allow them a rare opportunity to not simply observe mixed-species groups but to examine the ecological context within which they occur.

She and Palmer said there are also plenty of questions to address with follow-up research, including how mixed-species groups better protects grazers from lions.

“The larger groups could provide more warning of lions because there are more eyes for vigilance, or that individual species in the group benefit from the behaviour of other species in a way that they wouldn’t if they had grazed on their own,” Palmer said. “Or it could simply be that the odds of any one individual being eaten go down if it’s part of a larger group. Our study can’t differentiate between any of those mechanisms.”

Co-authors include Michael Anderson of Wake Forest University and Craig Packer of the University of Minnesota. The research was funded by the National Science Foundation (DEB-1020479) and the National Geographic Society (WW-024R-17, WW-025R-17, NGS-52921R-18).

Header image: Wildebeest and zebra graze together in this camera-trap photo from Tanzania’s Serengeti National Park. The photo is one of more than 115,000 camera-trap photos from the Snapshot Serengeti project that were used in a study of mixed-species grazing. Credit: snapshotserengeti.org.