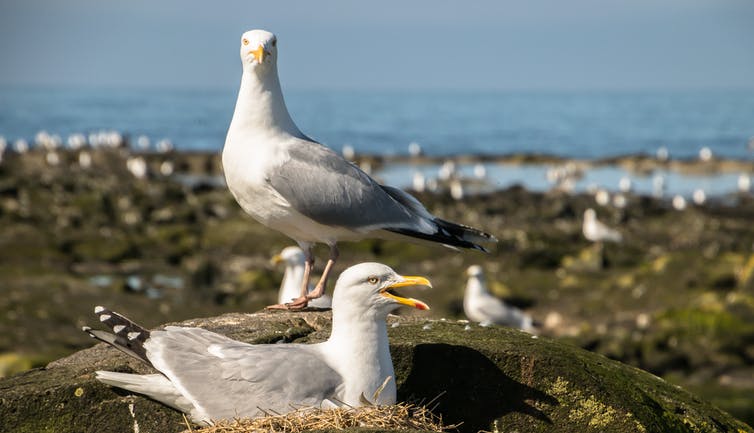 From the packaging our food comes in to the clothes we wear, plastic is everywhere. We know that seabirds eat it and get tangled in it, but we are only just beginning to explore the impacts this has on their health and survival. This is really important, particularly in the UK where many species, such as the northern gannet (Morus bassanus) and Manx shearwater (Puffinus puffinus), breed in greater numbers than anywhere else in the world.

Many seabird species are in drastic decline. A recent report found that in the last 18 years, the UK population of European shags (Phalacrocorax aristotelis) has fallen by 24%, black-legged kittiwakes (Rissa tridactyla) have reduced by half and Arctic skua (Stercorarius parasiticus) populations have shrunk by 70%.

But what’s behind these declines remains something of a mystery. Overfishing and climate change are thought to be key drivers, but despite knowing that plastic is widespread in their environment, we currently lack even the most basic data on which seabird species are affected by this pollution and how.

Before we can effectively deal with any threat posed by plastic pollution, we need to understand the scale and type of effects it’s having. Our study is a first step towards this. We uncovered evidence that Scottish seabirds are not only ingesting plastic, but they appear to be accumulating it in their nests.

Unpicking the impact of plastic

We looked at five European seabird species – great cormorants (Phalacrocorax carbo), European shags, great black-backed gulls (Larus marinus) and the more familiar seagulls, which are the herring (Larus argentatus) and lesser black-backed gulls (Larus fuscus). The latter four of these are of “Conservation Concern” in the UK according to the RSPB, due to their declining populations.

Plastic pollution was intimately intertwined with the nesting behaviour and daily lives of these species, possibly affecting their breeding success and survival. We found that 32% of herring gull nests, 53% of great black-backed gull nests and, worryingly, 80% of European shag nests contained plastic. Even worse, 39% of herring gull pellets – regurgitated bits of indigestible food – also contained plastic.

Plastic in nests is known to ensnare adults and chicks, often with fatal consequences. For some species, the nest must keep the egg warm and dry. We don’t know whether plastic could be altering how well the nest warms its occupants or allows liquids to drain, but any changes could affect hatching success. Equally, the range of colours plastic comes in may affect the nest’s camouflage, making eggs and chicks more vulnerable to predators.

We found clear differences in the type of plastic in herring gull nests from that contained in their pellets. We think this reflects differences in where this species collects its food and its nest material. The ingested plastic was a variety of colours and types, including fibres, packaging and hard fragments, suggesting it might be found in an urban environment or in a landfill. But the nest plastic we found was only sheet packaging, the sort more likely to wash up on the shore closer to their home.

This kind of information can help us begin to understand how effective different efforts might be. If the plastic used for making nests is collected from the shore before nest building begins in early spring, like during beach cleans, it could limit the impact on particular seabird species.

As nationwide lockdowns have eased during the COVID-19 pandemic, unprecedented levels of plastic waste have been left on UK beaches. We’re only just peeling back the surface on how this pollution harms wildlife. But as the evidence mounts, the urgent need to prevent plastic entering the environment becomes ever clearer.