Home » When calling loudly, echolocation is costly for small bats 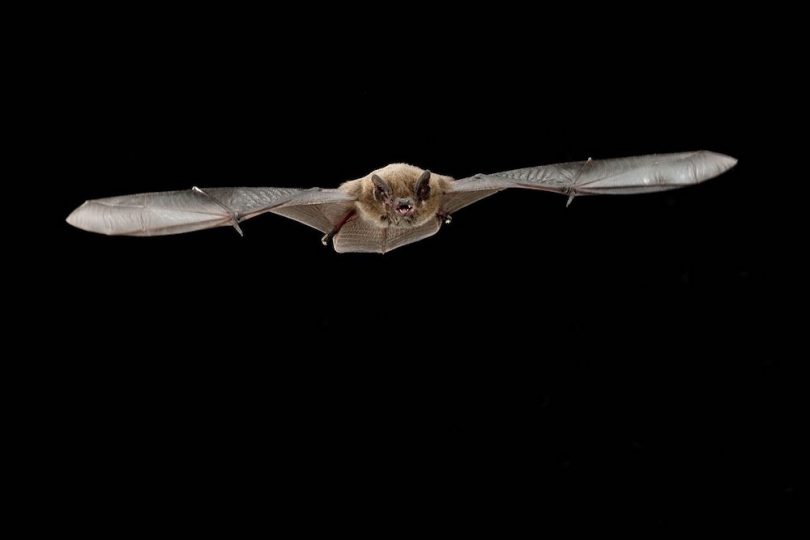 Calling in the ultrasonic range enables small bats to orient themselves in the dark and track down tiny insects. Louder calls travel farther, improving a bat’s ability to detect their prey.

For many animals, vocalisations are essential for survival. With their calls, roars, croaks, chirps or songs, animals attract potential mating partners, repulse competitors or locate prey. These sounds can be deafening. A bison, for instance, roars at up to 127 decibels (dB), some birds reach 132 dB and sea lions even manage 137 dB! For comparison: a sound pressure level of 110dB is equivalent to the sound of jet engine 100m away. Despite their small size, bats can reach a sound pressure level of 137 dB, amongst the loudest animals in the world. But because of their high frequency, these sounds are inaudible to the human ear.

In principle, generating a higher sound pressure level is associated with higher energy costs. If a bat in search of prey wants to increase the distance over which its echolocation travel, it has to call louder, which should cost more energy. Until now, the prevailing opinion amongst scientists was that, at least in flight, bats can boost the sound pressure level of their calls without additional energy expenditure. This is because they synchronise the contraction of the abdominal wall, necessary for sound production, with the contractions of the large, active flight muscles to generate echolocation calls. According to conventional wisdom, the pressure generated by the wing beat is sufficient to support the production of very loud echolocation. The energy expenditure of flying bats should therefore remain more or less the same, regardless of whether they call softly or loudly.

A team of scientists from the Leibniz Institute for Zoo and Wildlife Research (Leibniz-IZW) in Germany and Tel Aviv University in Israel has now shown that this is not the case. In their experiments, they allowed Nathusius’ pipistrelle bats (Pipistrellus nathusii) to fly freely in a wind tunnel under controlled conditions. Using loudspeakers, the researchers generated a loud background noise inside the tunnel. This encouraged the bats to drown out the noise with more intense echolocation calls. Before flying in the wind tunnel, the animals had received an isotonic solution of 13C-labelled sodium bicarbonate, which is exhaled as carbon dioxide during breathing, a proxy for metabolic rate. From the isotopic composition of the breathing air before and after the flight, the scientists determined the animals’ energy expenditure when flying in the tunnel.

“When bats were flying with only the noise from the wind tunnel, echolocation intensity was 113 dB on average” says Leibniz-IZW scientist Shannon Currie, joint first author of the study. “But when flying in background noise of 109dB, the bats increased their echolocation intensity to an average of 128 dB.” Since the sound pressure level follows a logarithmic scale, the bat calls were actually 30 times louder when there was a high background noise in the wind tunnel.

This had significant effects on energy expenditure. Metabolic power rose by 0.12 watts when bats were calling 15 dB louder. If a bat were to maintain this high sound pressure level throughout a typical night-time foraging flight, it would have to catch about 0.5 grams of additional insect prey to compensate for the added energy expenditure, or one fourteenth of their own body mass. This is an enormous amount for an animal that itself weighs only seven grams.

“Our study illustrates that in bats the coupling of the abdominal wall movement with the flight muscle contractions alone is not sufficient to produce very loud calls,” explains Christian Voigt, head of the Department of Evolutionary Ecology at the Leibniz-IZW. “We therefore assume that with more intense echolocation, additional muscles must become active to support the production of sound. This clearly costs a great deal of energy – especially above 130 dB. A bat in search of prey cannot increase at will the intensity and thus the distance over which its calls range. Instead, it must use loud calls economically and find a good compromise between the associated energy expenditure and the efficiency of echolocation.”