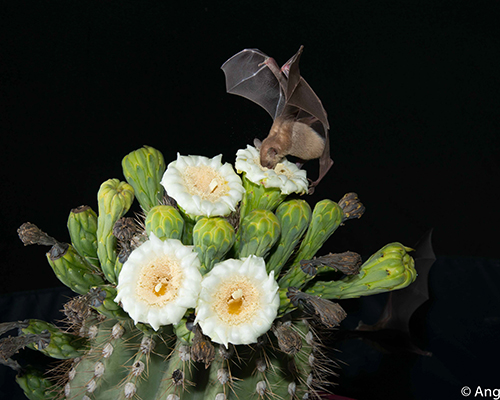 Scientists studying the ‘near threatened’ tequila bat, best known for its vital role in pollinating the Blue Agave plant from which the drink of the same name is made from, have analysed its DNA to help inform conservationists on managing their populations.

The findings are published in Global Ecology and Conservation.

Native to the Americas, the tequila bat (Leptonycteris yerbabuenae) lives in caves in some of the hottest desert areas in Mexico. Given that bats are highly mobile, and that migratory species tend to mix constantly with other bat populations, it is hard for conservationists to know whether they are protecting the best sites for the tequila bats to roost.

While known that some tequila bat populations migrate in Mexico’s spring months to the Sonoran Desert to give birth to their pups and pollinate a variety of plants iconic to the region, including the economically important Blue Agave plant. Other tequila bat populations inhabit Southern Mexico year-round, forming large breeding colonies in the winter months.

This study aimed to help better inform conservationists of the species’ breeding and migratory patterns by determining whether the bats inhabiting Southern Mexico year-round have a similar ancestral origin to those that migrate to the Sonoran Desert.

DNA analysis was necessary to understand how historical events may have shaped current tequila bat populations. But first, an international team, comprising researchers from the University of Bristol, the Centro de Investigación Científica y de Educación Superior de Ensenada and the Universidad Nacional Autónoma de México, had to track down the elusive creatures by travelling to remote caves in Mexico to collect DNA skin samples.

Bat expert, Angelica Menchaca (PhD) from Bristol’s School of Biological Sciences who led the study, said: “Tequila bats are beautiful, especially after they arrive back from feeding as they return covered in pollen, completely yellow, a sign of how important they are to this ecosystem. They are easy to handle, not like other bat species that can be more aggressive.

“However, our expedition to the desert was not without hitches and dangers. We were often hiking in temperatures routinely exceeding 40°C and encountering desert wildlife such as rattle snakes, scorpions, hares, reptiles and ring-tailed cats along the way.

“Once we located the bat colony, our aim was to collect DNA skin samples from the bat’s wing which heals quickly and doesn’t harm them. We would wait until the bats went out to forage at around midnight and then enter the caves that were filled with thousands of baby bats, all packed together in nurseries, waiting for their mums to return.”

Bats are subject to many threats around the world. Their populations are threatened by habitat loss, their roosts are often disturbed, and people fear them both from myths and as potential disease carriers. Bat-phobia is only increasing in our current climate. However, despite their often-negative press, bats are very valuable to ecosystems and the benefits they bring to our societies including the popular beverage tequila.

After analysing samples, the team were able to identify the bats’ mitochondrial DNA and use this to trace the maternal line of the different populations to understand the ancestral descent of the species.

Explaining the findings, Dr Menchaca added: “Contrary to current practice, our study demonstrates that the species must be managed as two conservation units (CUs) in Mexico. We have shown that tequila bat populations that establish maternity colonies in the Sonoran Desert in northern Mexico show a distinct migratory behaviour, breed during the summer, have specific habitat requirements and belong to a maternal line distinct to their southern counterparts.

“In the present context of an accelerated rate of habitat loss, increased fear of bats and decreased appreciation as ecosystem service providers, understanding how we can help support this important species survive these threats is even more relevant.

“We are studying other differences related to their behaviour and morphology that will also help us understand how these bats adapt to diverse habitats.”

Importantly, this research will be used to help inform conservation management strategies, as the tequila bat is considered “Near Threatened” by the IUCN Red List of Endangered Species.

Reference: Conservation units and historical matrilineal structure in the tequila bat (Leptonycteris yerbabuenae) by A Menchaca et al in Global Ecology and Conservation.