Home » Beavers gnawing away at the permafrost 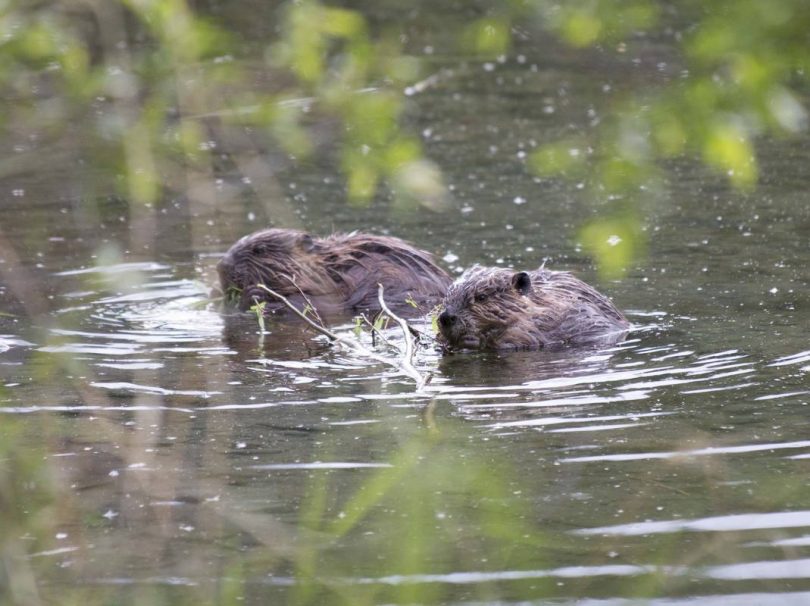 Alaska’s beavers are profiting from climate change, and spreading rapidly. In just a few years’ time, they have not only expanded into many tundra regions where they’d never been seen before; they’re also building more and more dams in their new homes, creating a host of new water bodies. This could accelerate the thawing of the permafrost soils, and therefore intensify climate change, as an International American-German research team reports in the journal Environmental Research Letters.

When it comes to completely transforming a landscape, beavers are hard to beat. Very few other animals are capable of changing their habitat as precisely as these brown-furred rodents, which can weigh up to 30 kilograms. Armed with sharp teeth, they fell trees and shrubs and build dams, causing small valleys to fill with water and forming new lakes, which can easily measure a few hectares. “Their methods are extremely effective,” says Dr Ingmar Nitze from the Alfred Wegener Institute, Helmholtz Centre for Polar and Marine Research (AWI) in Potsdam. They often build their dams at precisely those points where they can achieve major effects with minimal effort.

This is something that Ingmar Nitze has repeatedly seen in the Arctic regions of Alaska, where the North American beaver is active. The researcher is an expert on remote sensing, and is especially interested in those parts of the Earth where the soil is permanently frozen. Climate researchers fear that, as temperatures rise, this permafrost could increasingly thaw and become unstable. If that happens, it could release massive quantities of greenhouse gases, which would intensify climate change.

Accordingly, Nitze and his colleagues are monitoring the development of these landscapes with the aid of satellite images. One interesting aspect in this regard is how the lakes and other bodies of water are distributed. Because the water they contain is somewhat warmer than the surrounding soil, these lakes and ponds can further accelerate permafrost thawing. And beavers would seem to be actively contributing to the process.

Back in 2018, Ingmar Nitze and Guido Grosse from the AWI, together with colleagues from the USA, determined that the beavers living in an 18,000-square-kilometre section of northwest Alaska had created 56 new lakes in just five years. For their new study, the team from the AWI, the University of Alaska in Fairbanks, and the University of Minnesota in Minneapolis have now taken a closer look at this trend. Using detailed satellite data and extended time series, the experts tracked the beavers’ activities in two other regions in Alaska – and were surprised by what they found.

“Of course, we knew that the beavers there had spread substantially over the last few decades,” says Nitze. This is partly due to climate change; thanks to rising temperatures, now more and more habitats offer the shrubs that the animals need for food and building material. Furthermore, the lakes, which used to freeze solid, now offer beaver-friendlier conditions, thanks to their thinner seasonal winter ice cover. Lastly, the rodents aren’t hunted as intensively as in the past. As a result, it’s a good time to be a beaver in the Arctic.

“But we never would have dreamed they would seize the opportunity so intensively,” says Nitze. The high-resolution satellite images of the roughly 100-square-kilometre study area near the town of Kotzebue reveal the scale of the animals’ activities there. From just two dams in 2002, the number had risen to 98 by 2019 – a 5,000-percent increase, with more than 5 new dams being constructed per year. And the larger area surveyed, which covers the entire northern Baldwin Peninsula, also experienced a beaver dam boom. According to Nitze, “We’re seeing exponential growth there. The number of these structures doubles roughly every four years.”

This has already affected the water balance. Apparently, the rodents intentionally do their work in those parts of the landscape that they can most easily flood. To do so, sometimes they dam up small streams, and sometimes the outlets of existing lakes, which expand as a result. “But they especially prefer drained lake basins,” Benjamin Jones, lead author of the study, and Nitze report. In many cases, the bottoms of these former lakes are prime locations for beaver activity. “The animals have intuitively found that damming the outlet drainage channels at the sites of former lakes is an efficient way to create habitat. So a new lake is formed which degrades ice-rich permafrost in the basin, adding to the effect of increasing the depth of the engineered waterbody,” added Jones. These actions have their consequences: in the course of the 17-year timeframe studied, the overall water area in the Kotzebue region grew by 8.3 percent. And roughly two-thirds of that growth was due to the beavers.

The researchers suspect that there have been similar construction booms in other regions of the Arctic; accordingly, they now want to expand their ‘beaver manhunt’ across the Arctic. “The growth in Canada, for example, is most likely even more extreme,” says Nitze. And each additional lake thaws the permafrost below it and on its banks. Granted, the frozen soil could theoretically bounce back after a few years, when the beaver dams break; but whether or not the conditions will be sufficiently cold for that to happen is anyone’s guess. For Ingmar Nitze, all of these aspects mean there are plenty of reasons to keep an eye on these four-legged landscape engineers: “Anyone who wants to predict the future of the permafrost should be sure to keep the beaver in mind.”