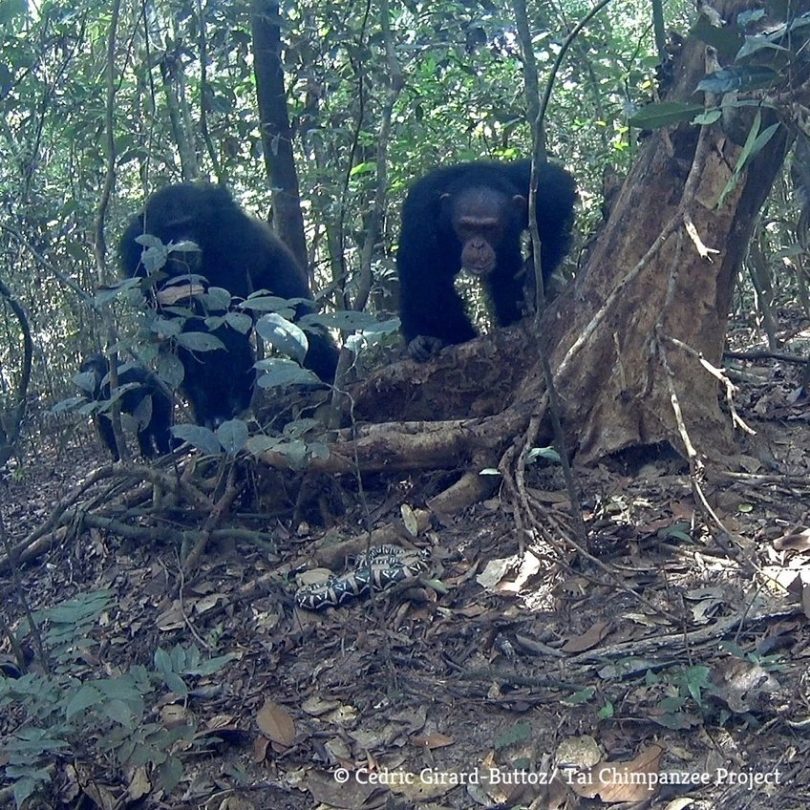 Humans are unique in their abilities to cooperate in very large groups and help people outside their family and even complete strangers. What promoted the evolution of such sophisticated cooperative skills is highly debated. Scientists investigated cooperation dynamics in wild chimpanzees (Taï, Ivory Coast) and bonobos (LuiKotale, DCR) using a snake model. While chimpanzees cooperate to defend their territory, bonobos do not. The study reveals no differences in both species’ social intelligence but supports theories linking territoriality and in-group cooperation in humans since chimpanzees were more motivated to cooperate by informing others of a threat as compared to bonobos.

We humans have unique cooperative systems allowing us to cooperate in large numbers. Furthermore, we provide help to others, even outside the family unit. How we developed these cooperative abilities and helping behaviour during our evolutionary past remains highly debated. According to one prominent theory, the interdependence hypothesis, the cognitive skills underlying unique human cooperative abilities evolved when several individuals needed to coordinate their actions to achieve a common goal, for example when hunting large prey or during conflict with other groups. This hypothesis also predicts that humans who rely more on each other to achieve such goals, will be more likely to provide help and support to one another in other situations.

“While we cannot study the behaviour of our human ancestors”, explains Roman Wittig, a senior author and head of the Taï Chimpanzee Project, “we can learn how relying on others may influence helping behaviour in our ancestors by studying our closest living relatives, chimpanzees and bonobos”. Chimpanzees are more territorial than bonobos and in some populations engage more frequently in group hunts. According to the interdependence hypothesis, chimpanzees should thus have evolved a higher tendency to cooperate and help others in the group.

To test this hypothesis, researchers from the Max Planck Institute for Evolutionary Anthropology, Harvard University and Liverpool John Moores University, presented 82 chimpanzees and bonobos from five different communities with a model of a Gaboon viper, a deadly snake. During the experiment the apes could cooperate with each other by producing alarm calls to inform conspecifics about the snake. This represents the first experimental study ever conducted in wild bonobos. “This experimental study is a novel and promising approach to probe bonobo’s mind” says Gottfried Hohmann, a senior author on the study and head of the LuiKotale bonobo project. Martin Surbeck, co-author on the paper adds: “This study should stimulate several more experimental studies on wild bonobo cooperation, cognition, and communication”.

In this study, researchers show that both chimpanzees and bonobos can assess what others know, as they stopped calling when all individuals around had seen the snake. However, chimpanzees warned each other more efficiently: individuals arriving later at the snake were less surprised upon seeing it than late arriving bonobos. This suggests chimpanzees were better informed of the snake’s presence than bonobos. Indeed, late arriving chimpanzees were more likely to hear a call before reaching the snake than bonobos in the same circumstance, suggesting that the motivation to help and warn others was higher in chimpanzees.

“Our findings support the theory that the extreme reliance on each other in humans, for instance during war and group hunting, may have promoted the evolution of some forms of help and support to others, even sometimes to complete strangers” says first author Cédric Girard-Buttoz. The authors confirm that chimpanzees may have some awareness of others’ knowledge and demonstrate for the first time this ability in wild bonobos.

“How chimpanzees and bonobos apparently keep track of other’s knowledge, the specific cognitive skills to do this, are not clear””, adds Catherine Crockford, last author of the study, “we face a major challenge to understand which cognitive skills are unique to humans and which are shared with other apes”.