Home » Gigantic wolverines, otters the size of wolves: fossils offer fresh insights into the past 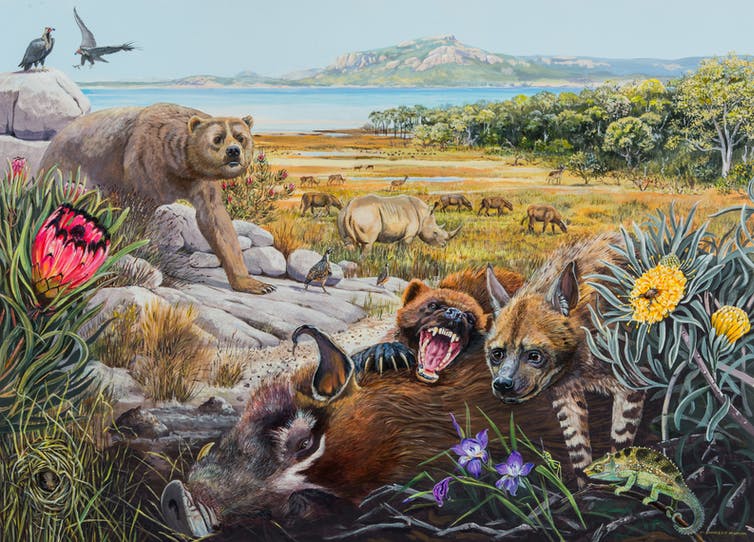 About 120 km north of Cape Town and less than 2° north of the southern tip of Africa lies a quarry that, to the untrained eye, has nothing interesting to offer.

In reality, Langebaanweg ‘E’ Quarry is a palaeontological wonderland dating back 5 million years. It has yielded one of the richest and best-preserved vertebrate fossils of the Neogene (a geological era dating from 23 million to 2.5 million years ago) to be found anywhere in Africa.

Back then, the weather was about 2-3 degrees warmer and the sea level was 30m higher. An array of terrestrial and marine wildlife occupied different ecosystems: riverine forests, open grasslands and tidal zones. Primitive fauna were transitioning into more modern animals we’d recognise today: there were hyenas; sabretooth cats; small felines; Agriotherium, a giant relative of bears; giant civets; small mongoose; three different relatives of elephants including the earliest Mammoth; rhinoceroses and hippopotamus.

There were also 90 bird species ranging from penguins to parrots; reptiles, frogs, a variety of sharks, seals, whales and dolphins.

There were mustelids, a modern family of small to medium carnivores that includes weasels, otters and badgers. Three mustelid species were found at Langebaanweg five million years ago. Two of them were gigantic: Sivaonyx hendeyi was an otter the size of a wolf (around 40 kg) and Plesiogulo aff. monspesulanus was a leopard-size (about 65 kg) relative of living wolverines. Both are extinct. Today the largest living land mustelid is the Gulo gulo wolverine, which is around 20 kg.

Our latest study focused on fossil finds from Langebaanweg that shed more light on these massive mustelids. The teeth and limb bones that we studied help to understand the role and lifestyle of these species in extinct ecosystems. We are now able to hypothesise that the Sivaonyx hendeyi was a more semi-aquatic mustelid compared with older Sivaonyx species from Africa (specifically, Chad), and that it moved through the water and on land differently to the Chad species.

Our work also confirms that Langebaanweg’s wolverine was a different species to another huge wolverine, Plesiogulo botori from Kenya and Ethiopia. That means there were two very large species of what we’d recognise today as wolverines on the continent at the end the Miocene era and the beginning of the Pliocene era, between five and six million years ago.

All the fossils we studied were previously excavated at the West Coast Fossil Park, where Langebaanweg is located, and are currently housed in the Cenozoic Collections at the Iziko South African Museum.

The last excavations there happened in the 1990s and 2000s. One of us (Romala Govender) has undertaken new excavations at the West Coast Fossil Park since 2016, which have centred on growing the marine fauna in the Langebaanweg collection. Another, ongoing excavation started at the site in 2019.

The fossils we examined for this study come from the earlier excavations. Sivaonyx hendeyi is a giant, bunodont otter that has high and round cusps on the premolars and low and round molars. Fossil remains of the species have been found in Africa, specifically in Chad, Kenya, Ethiopia and South Africa, India and western Eurasia (Germany, Greece, and Turkey); these date back to between about 11 million and 2.5 million years.

Our study suggests that Sivaonyx hendeyi at Langebaanweg was more semi-aquatic than the oldest identified African species, from Chad, which has been interpreted as being fully terrestrial.

Its robust dentition also suggests a diet based on very hard items such as armoured catfishes, molluscs, crustaceans and bones. In contrast, the much smaller clawless otter (Aonyx capensis) eats mainly fish, but also crab, abalone and Cape rock lobsters as well as birds, molluscs, amphibians and rodents. These and other modern otter species didn’t evolve directly from the Sivaonyx – they are cousins with a common ancestor. Many more giant otter fossils will need to be studied to clarify just how they are related to the otters we know and see today.

The other species we focused on, Plesiogulo aff. monspesulanus, was a gigantic wolverine. Our work confirms that it is a different species to the very large Plesiogulo botori, fossils of which have been found in Kenya and Ethiopia.

This means there were two very large species of what we’d recognise today as wolverines in Africa at the end of the Miocene and the beginning of the Pliocene.

The skeleton of the South African species is like the modern, living wolverine, though the limb, feet and hand bones are less elongated and more stoutly proportioned. The robust forelimb in particular suggests the animal was an ambush predator which would surprise and subdue its prey rather than chase them down. Its robust and massive dentition shows the animal could process the carcass and bones of its prey, although not as well as living hyenas do.

In fact, this group was replaced in the late Pliocene by other families of carnivores such as hyenas, canids and felids. We’re not sure why the large wolverines went extinct, though it was likely through a combination of shifts in climate and competition with other carnivores.

There is much more to be learned from both the fossils that haven’t yet been unearthed at Langebaanweg and those which have already been collected and are held in the Iziko South African Museum’s collection. These fossils include carnivores related to the living honey badgers, jackals, seals and even sabretooth cats.

Header image: What South Africa’s West Coast might have looked like 5 million years ago. In the foreground, a giant wolverine feeds on a pig while chasing away a primitive hyena. Credit: Maggie Newman, Geological Society of South Africa and the University of the Witwatersrand.