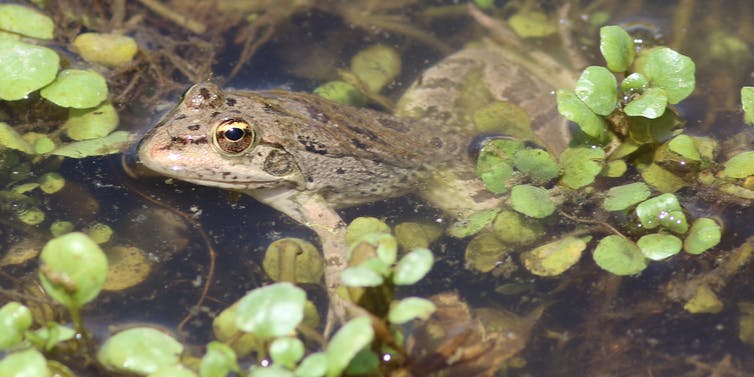 Amphibians such as frogs, toads, newts and salamanders, are the world’s most threatened group of vertebrates. Of the 6,800 species assessed by the International Union for the Conservation of Nature, 41% are classified as threatened. The main threats to their survival are well known and include disease, pollution, habitat loss and climate change.

Frogs also face another, less-known threat: Humans collect many frog species as food. This trade spreads disease, destroys their habitats and reduces control of mosquitoes and agricultural pests that frogs eat. But there has been very little research on how it affects frog populations.

In a newly published study, we conducted field research in Turkey, where frog harvesting has taken place for some 40 years, to assess its effect. We found that at current rates, Anatolian water frogs – the main species harvested in Turkey – may become extinct in heavily harvested areas within the next 15 to 30 years. But our research also shows that this harvest could be managed more sustainably, which would benefit both frogs and people in the region.

Frog legs have long been associated with French gastronomy, but people also eat them in other European countries, the United States and Asia. Most of these frogs are caught in the wild in countries far from where they are consumed, such as southeast Asia and the Middle East. Frog harvesting is regulated to different degrees in different countries, ranging from total ban to unregulated harvest.

The largest importers are the U.S. and the European Union, while the largest exporters are Indonesia and China. According to one estimate, 100 million to 400 million frogs are shipped internationally as food each year.

This trade has affected frog populations in many countries. For example, when France and Romania banned commercial frog hunting, exports from India and Bangladesh increased in what has been called an “extinction domino effect.” And when those countries adopted their own bans, Indonesia and China became suppliers.

For this study, members of our research team caught and marked almost 14,000 frogs in the Çukurova Region in southern Turkey, a flat, fertile zone that stretches along the Mediterranean Sea. Over three years, we sampled four times per season, tagging and releasing frogs that we found in ponds, canals and streams and then noting when we recaptured them later.

Anatolian waterfrogs (Pelophylax spp) form a species complex made up of two to five closely related species. Frog exporters use uncertainty about how to classify these species to their advantage by labelling all frogs as “edible frog” when they are marketed in Europe, even though the actual species known as Edible Frog (Pelophylax esculentus) does not live in Turkey.

Most consumers are not aware that they are not eating what they have come to know as “Edible Frogs,” much less where their frog legs come from, or what impact their consumption could have on natural populations.

We used the data we collected in a population model – a mathematical representation of how a frog population changes over time. Scientists use models like this to study animal and plant populations and forecast their future sizes. One of us has developed such mathematical models and applied them to a wide variety of species. They require a lot of data, which is one reason why there have been few studies analysing the effects of harvest on frog populations.

We found that the frog populations we studied were declining rapidly, by about 20% per year. According to our models, there is a 90% chance that these frog populations may go extinct in the Çukurova Region by 2050 if harvesting trends continue.

However, not all populations of Anatolian waterfrogs are harvested. If enough frogs move between different regions, there is a chance that they could recolonise areas that undergo local extinctions.

Frog harvesting in Turkey is worth nearly $4 million yearly. Our calculations show that Turkey exports more than 36 million frogs annually, about half of them from the Çukurova region. Frog harvesting is the main livelihood for many people in this region. Most harvesters have low incomes, no permanent job and no social benefits.

A ban on frog harvesting would cause this vital source of income to disappear. But so would extinction of these local frog populations.

The good news is that it’s possible to harvest these populations at a sustainable rate. Doing so would increase the total harvest and help the local economy. Our analysis shows that the total number of frogs that can be harvested from these populations in the long term is highest at a moderate harvest rate of about 5% to 10% of the population per year. When this proportion increases to 20% and above, the risk of a population crash increases sharply, and the total amount that can be harvested declines.

Reducing the harvest rate would ensure both the frogs’ survival and local livelihoods. First steps could include a ban on harvesting frogs during the mating season and effective enforcement of size limits that allow only larger frogs to be harvested. Such restrictions are commonly used for other types of wild-caught food, such as marine fish, and there is plenty of evidence suggesting that they can be effective.

As part of our research, we have made relevant government agencies aware of this issue, and hope that the measures we recommend will be implemented soon. With frogs declining worldwide, reducing threats from harvest would make an important contribution to the survival of these populations.