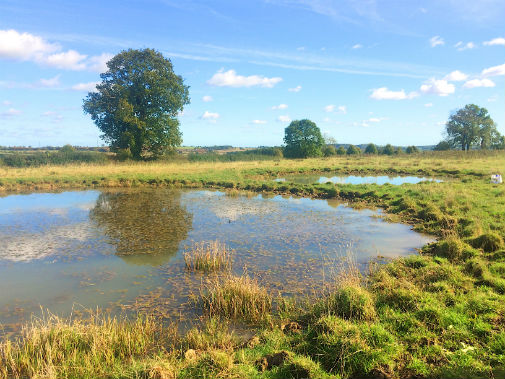 Digging ponds in the countryside can deliver unprecedented gains for nature, according to a study involving the University of York.

The nine-year project found that creating 20 clean water ponds on farmland increased wetland plant species by more than a quarter (26%).

The project found that rare plants almost trebled, while species that had gone extinct in the area returned.

The study, published in the journal Biological Conservation, tested a range of measures for improving freshwater habitat and wildlife in the countryside in three catchment areas in Leicestershire.

These included putting woody debris in streams, damming up ditches to create pools that slowed run-off and building interception ponds to filter out nutrients and other pollutants.

The project also created clean water ponds, focusing on digging them in low intensity pasture, scrub or woodland where they would fill up with clean water and avoid pollution running off from agriculture or roads.

In the absence of any measures the number of wetland plant species would have declined by 9% over the nine years of the project. The study found that the clean water ponds were much more effective than the other measures tested.

When the scientists put in the clean water ponds, it cancelled out that 9% decline and actually increased the number of wetland plant species by 26% compared to the starting point in 2010.

They were also one of the cheapest interventions, costing just £1,500–£2,000 each to dig, and helped bring back rare species such as marsh arrowgrass, bristle club-rush and mare’s tail.

Professor Colin Brown, from the University of York’s Department of Environment and Geography and one of the academics involved in the study, said:”Rural freshwaters are under intense threat from a wide range of pollutants, resulting in a slow but steady decline in biodiversity. Perhaps the most important finding of the research was how strikingly large and fast the positive response was from creating the clean water ponds.”

Penny Williams, from Freshwater Habitats Trust who led the study, said: “The gains we saw are unprecedented for freshwater and are, by a long way, the largest recorded improvements in freshwater diversity seen from adding land management measures to countryside landscapes.

“Our previous work had already shown that ponds were a secret treasure in the British countryside – with a value out of proportion to their tiny size – however the scale of benefits from adding new ponds took all of us by surprise.”