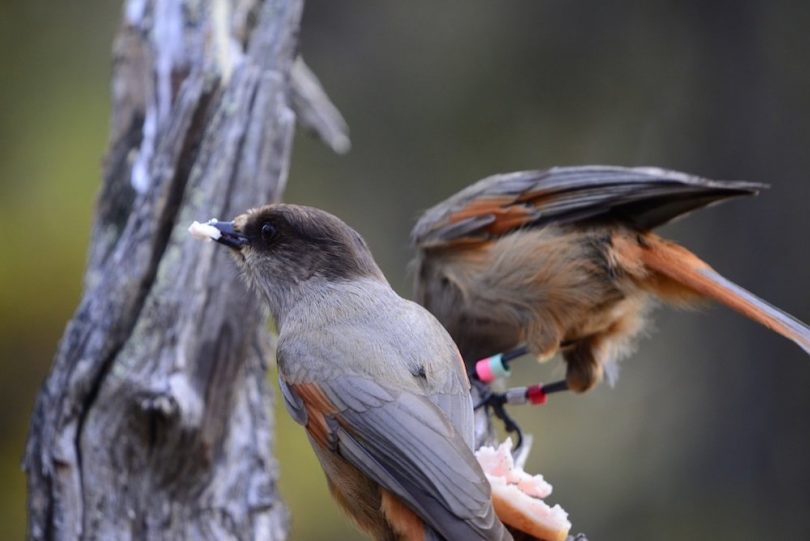 The current study analyses social and life-history data from several thousand songbirds, including 127 corvids, the family that includes jays, crows, ravens, and magpies. Results show that corvids are unusual in having larger brains and “extended childhoods,” where parents provide the young with a safe haven to learn and practice skills they need to survive as adults. These findings shed light on how extended parenting in humans facilitated the evolution of our extraordinarily large brains.

Humans are unusual, even among primates, in the length of our “extended childhood.” Scientists think that this period of childhood and adolescence, which gives us lots of time to explore, create, and learn, is a key reason why we are smart enough to learn skills that take years to master. But humans are not the only species with an extended childhood. Elephants, some bats, whales, dolphins, and some birds – especially corvids – also have them. But does an extended childhood make other species smart too, and if so, what is the role of parenting?

A team of scientists from the Max Planck Institute for the Science of Human History, the University of Konstanz and the UK tackled these questions by combining the results of their own fieldwork on two corvid species – Siberian jays and New Caledonian crows – with published data from 127 corvid species and several thousand species in the passerine (songbird) order. The study, published in Philosophical Transactions of the Royal Society B, offers a groundbreaking new view on the evolution of intelligence, where parenting takes centre stage.

Researchers spent years observing two bird species in the wild to understand how young birds’ learning is related to parenting received during adolescence and survival in adulthood. At a study site in Sweden, researchers used field experiments to test the ability of young Siberian jays to learn crucial life skills: recognising a dangerous predator and opening a puzzle box to access food. Across the northern Palearctic, Siberian jays live in family groups which can include not only the young of a breeding pair, but also young that were born in other groups. These young can stay with the family group for up to four years. Young that stayed with their parents longer benefitted from being with their parents. They learned faster by watching their parents and received more food from their parents. As a consequence, they were more likely to live longer and to start their own family.

At a study site in New Caledonia, researchers followed New Caledonian crows to track how juveniles learn a key survival skill: making tools for food retrieval. It takes about a year to learn this skill – a costly time investment for the parents who still have to feed the young. Surprisingly, these crows can stay with their parents for up to three years, allowing for a much longer “childhood” than most other crows. Parents and other adults are extremely tolerant to young crows. While adults are using a tool to get food, they feed the juveniles, let them watch closely, and even tolerate tool theft and physical contact by juveniles. As a result of this tolerant learning environment, New Caledonian crows have the largest brain size for their body size of all corvids.

The authors argue that the key role of parenting on the evolution of cognition has been overlooked so far. Often thought of as merely an inevitable chore, parental care is the reason children can spend their childhood learning and making mistakes.

In addition to benefitting young learners, extended parenting helps pay for the costs of an extended childhood. Having to feed extra mouths is costly, but when there is enough food available in the environment, parents can afford to keep on feeding the young for longer. With a safe haven, young birds have the time to grow a larger brain, learn difficult skills, and access vital food resources. These acquired skills lead to better survival, and possibly also allow the species to expand into new environments.

Corvids are unusual birds, but are similar to humans

The researchers used phylogenetic comparative methods to analyse the differences between corvids and all other passerines. Corvids have much larger brains relative to their body size, like humans. They also have prolonged developmental periods, both in the nest and after they leave – another characteristic of humans.

“Both humans and corvids spend their youth learning vital skills, surrounded by tolerant adults which support their long learning process,” explains Natalie Uomini of the Max Planck Institute. “Moreover, corvids and humans have the ability for lifelong learning – a flexible kind of intelligence which allows individuals to adapt to changing environments throughout their lifetime.”

In the light of this study, the importance of parenting comes into even greater focus. Parents have a vital role in helping young brains grow smarter. Children, like young birds, cannot learn skills in isolation. Instead they need a nurturing, supportive environment that allows the full potential of their large brains to develop.