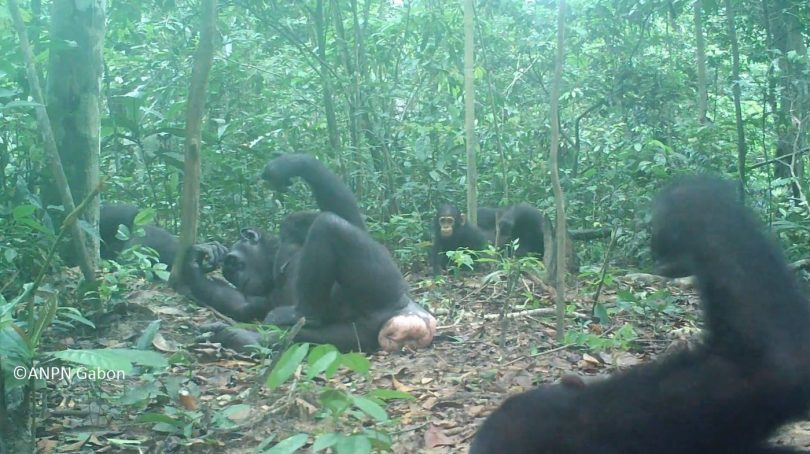 The transmission of cultures from generation-to-generation is only found in a few species besides humans. Chimpanzees are one such species and exhibit a large diversity of cultural and tool use behaviours. Although these behaviours have been well documented at a handful of long term research sites, the true cultural repertoire of chimpanzees across populations is still poorly understood. To better understand this diversity, researchers at the Max Planck Institute for Evolutionary Anthropology in Leipzig, Germany, initiated the ‘Pan African Programme: The Cultured Chimpanzee’ (PanAf) in 2010. Using a standardised protocol, researchers set up camera traps, collected samples and recorded ecological data at over 40 temporary and long-term research sites across Africa.

Prior to this study, termite fishing was thought to occur in only two forms with one or multiple tools, from either above-ground or underground termite nests. By carefully observing the techniques required to termite fish at 10 different sites, lead author Christophe Boesch created a catalogue of behaviours (ethogram) for each chimpanzee in the study.

“The diversity of techniques seen in chimpanzee termite fishing was a huge surprise to me. Not only does each community have a very unique way of fishing, they also combine a number of different elements into specific termite fishing etiquettes”, explains Christophe Boesch.”The most striking examples of this are how the Wonga Wongue chimpanzees of Gabon usually lie down on their sides to termite fish, while the Korup chimpanzees in Cameroon lean on their elbows, and the ones from Goualougo in the Republic of Congo sit while fishing.”

Because the communities of chimpanzees live in similar habitats with access to the same resources, ecological differences could mostly be ruled out to explain the observed differences. “This supports the idea that chimpanzees are capable of imitating social techniques in ‘how to termite fish’ which goes beyond alternative explanations such as each individual reinventing termite fishing each time they learn it”, explains co-author Ammie Kalan.

Conforming to the group

Much like in human etiquette, not everything is about increased efficiency but rather about conforming to what the rest of the group is doing. In humans, this is observed in the different chopstick cultures across Asia. “For example, in Thailand and Japan not only are chopsticks somehow shaped differently, but the way they hold them differ as well, and this is very reminiscent of what we see here with chimpanzees. In La Belgique in Cameroon, chimpanzees fashion their stick by opening the fibers to obtain a long brush and then rest the termite-covered stick on their wrist while they eat. On the other hand, at another site in Cameroon called Korup, the chimpanzees do not make a brush at all and use their mouth to shake the inserted stick while it is in the mound”, explains Christophe Boesch.

In humans, cultural variation has been documented in hundreds of different populations which is one explanation for why chimpanzee culture seems so limited in comparison. “What we knew before about chimpanzees came from at most 15 communities”, notes co-author Hjalmar Kuehl. “Through the PanAf we have been able to study many more communities and by this we are able to learn more about the richness of chimpanzee diversity and culture and could demonstrate that there is so much more to discover out there.”

Further analyses of videos and other data collected from the PanAf are currently underway. “Termite fishing and other cultural behaviours of wild chimpanzees can be observed first hand by signing onto our citizen science platform Chimp&See”, says co-author Mimi Arandjelovic. “At Chimp&See citizen scientists can watch the over one million video clips the PanAf has recorded from all across Africa of chimpanzees, gorillas, elephants, buffalo, leopards and many more species. Visit www.chimpandsee.org and you could be a citizen scientist contributing to analysing data and help with further discoveries in the wild!”