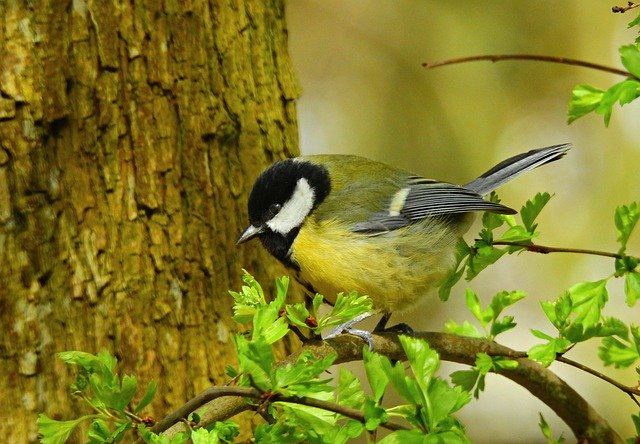 Urban insect populations would need to increase by a factor of at least 2.5 for urban great tits to have same breeding success as those living in forests according to research published in the British Ecological Society’s Journal of Animal Ecology.

Researchers at the University of Pannonia, Hungary and the University of Sheffield, UK found that providing high quality supplementary food to urban great tits, in the form of nutritionally enriched mealworms, can dramatically boost their breeding success.

“Urban nestlings had considerably higher survival chance and gained an extra two grams of body mass when provided with an insect-rich diet, an increase of 15% compared to the weight of chicks that didn’t receive extra food. This is a substantial difference.” said Dr Gábor Seress, lead author of the research. “This greater body mass when leaving the nest may increase the chicks’ chance of surviving to spring and breeding themselves.”

These beneficial effects of food supplementation were not seen in forest dwelling great tits where high quality nestling food is abundant. Although the free meals were also readily received by forest parents.

Reduced breeding success in urban bird populations is well documented but this study is the first to show that insect-rich supplementary food during nestling development largely mitigates these habitat differences. The findings indicate that food limitation in urban environments plays a crucial role in reducing the breeding success of insect-eating birds.

Dr Seress said: “Given the popularity of year-round bird feeding and the abundance of anthropogenic food sources in cities it might seem unlikely that urban birds have limited food. But quantity is not quality. Most songbirds require an insect-rich diet to successfully raise many and vigorous young, and urban areas generally support fewer insects than more natural habitats, especially caterpillars, which are key components of the optimal nestling diet for many species.”

The authors say that artificially providing insect-rich food for birds in cities may not be the best solution. “Instead of directly supplying high-quality bird food to enhance urban birds’ breeding success, we believe that management activities that aim to increase the abundance of insects in the birds’ environment, would be more effective. Insects are the cornerstone of healthy and complex ecosystems and it is clear that we need more in our cities.” said Dr Seress.

Increasing insect populations in cities in no easy task. The authors highlight that most urban green spaces are often highly managed which can reduce insect abundance. Modifying how green spaces are managed and encouraging practices like planting trees is likely to benefit both insect-eating birds as well as people.

In the experiment, the researchers studied great tits in nest boxes at urban and forest sites in Hungary, 2017. The urban sites were in the city of Veszprém with nest boxes placed in public green spaces such as parks and cemeteries. The forest site was three kilometres outside of Veszprém in deciduous woodland. At both sites there were broods that did not receive supplementary food to act as controls.

For the supplementary fed broods, the researchers provided nutritionally enhanced mealworms throughout brood rearing period on a daily basis, adjusting the amount in accordance to the brood size to meet 40-50% of food requirements. When nestlings were 15 days old (a few days from leaving the nest) the researchers recorded the size, weight and survival rate of chicks.

To estimate the amount of supplementary food consumed by the chicks and their parents, the researchers mounted small, hidden cameras on the nest boxes.

While the findings demonstrate that providing high quality additional food can boost breeding success, it is unclear to what extent this could increase population size and stability, further work is needed to explore this.

Further research into the reduced abundance of insects in cities is also needed. Dr Karl Evans, co-author of the research, said “There is a clear need for additional research to understand which of the many aspects that differ between urban and more natural areas causes the reduced abundance of insects in our cities and towns. This is essential in order to improve the habitat quality of urban environments for nesting birds”.