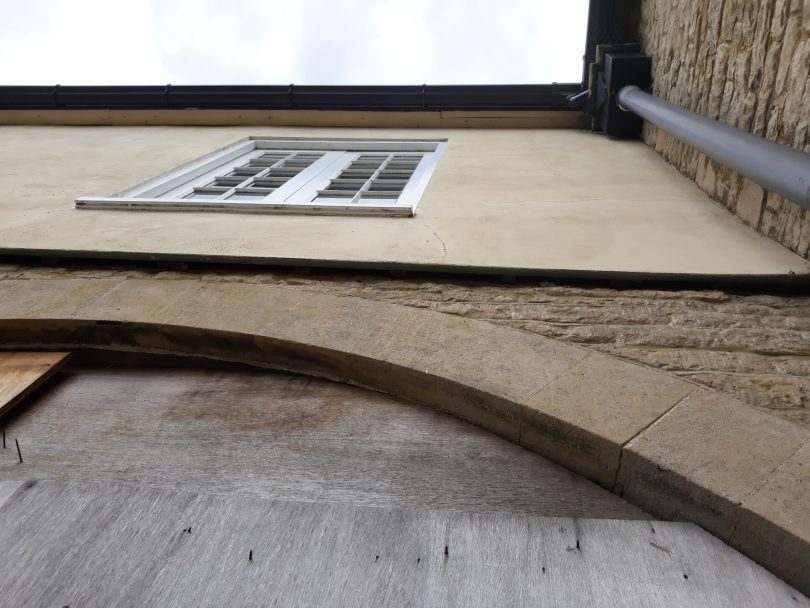 Ecologists, Laura Holmes and Lizzie Saunders (WYG), were recently involved in a project to repair a listed building, which led to an exciting discovery. Laura tells all …

Barbs? – Are you sure?
It was August 2019 – myself and Lizzie Saunders were busy updating reports and analysing bat calls when the phone rang: “A listed building you say? A building needing urgent underpinning? An unusual bat roost? No problem”. And, just like that, armed with our trusty endoscope and bat detectors, we set off on a bat hunt – akin to Batman when the bat signal has been lit.

Sure enough, we checked under cladding where the roost had been seen – little, black, pug-like faces smiled back at us. It was, in fact, a colony of the rare barbastelle bat, which are almost always only ever found in woodlands, but here they were, tucked under plasterboard cladding in a sheltered corner of an internal courtyard. That evening, we watched 24 barbs fly out from a gap the width of a finger – along with three common species. The other bats were found to have emerged from the roof voids and crevices in the thick stone walls. According to Natural England’s (NE) records, this was only the second confirmed case of a barbastelle maternity roost in a building, the other being in a barn in East Anglia.

Can we repair the building please?
After completing the survey work, the next obstacle was to prepare a mitigation strategy to demonstrate to the local planning authority (LPA) that the urgent repairs and underpinning could be completed with minimal disturbance to the barbastelle bats and the building. Permission was granted in autumn – four weeks after our initial visit to the site. Hurdle one had been successfully jumped.

The next step was always going to be the trickiest – obtaining a mitigation licence from NE to allow the works to proceed safely and within the constraints of wildlife-related legislation. NE do not usually receive applications to undertake mitigation works which may impact barbastelle maternity roosts, let alone ones in buildings. Unsurprisingly, on receipt of my application they immediately got in touch to discuss the project. NE asked to visit the site to see for themselves, so we met at the end of January to walk around the site and chat all things bats. My number plate caused much amusement as the last half is BAT, and my much-loved LED F1 torch caused a touch of kit-envy – always a thing with bat workers. We quickly formed a good collaborative relationship as we worked through the options to agree on a workable approach. After further discussions, Method Statement revisions and a lot of overtime on both sides (thanks NE advisors), the mitigation licence was granted in February so we could meet the tight timescales needed, meaning hurdle two had been jumped – phew.

Lets do this thing!
With NE’s agreement, the work began in February before the licence was formally issued – thanks to NE’s understanding of the urgency required. The bat boxes were installed and we immediately started fitting the agreed exclusion devices – you wouldn’t normally do this in February, but we only had six weeks to do all work before the barbastelles might return. As it had been mild, NE agreed we could go ahead subject to the weather being on our side. We had a few cold nights but managed to fit the required exclusion period in just before the underpinning works started.

The demolition of the southern extension took place at the end of February. Tom McClellan-West acted as my accredited agent, giving us more flexibility to be on site to work with the contractors and supervise, during the removal of the modern extension by hand. One brown long-eared bat was found in a quiet corner in the back room. As he was torpid but not hibernating, we were able to move him safely to one of the pre-installed bat boxes.

The underpinning
We checked the vacant barbastelle roost before the underpinning could start each day in case these highly sensitive bats returned early. Each morning, one of us braved the cold and headed out to site to check the trail camera footage, check any overnight static detector recordings and pop the endoscope back under the cladding – just to check for bats that may have snuck in undetected.

Last week we had unexpected visitors: the site manager found slow worms – the workers are keeping the site tidy to discourage reptiles from the works area, but due to the unseasonably sunny periods at basking time, we find the odd individual sunning themselves on the stonework.

The daily checks continued throughout March and no barbastelles returned. The nursery roosts can start forming in April, so the clock was still ticking towards the agreed deadline of 27 March. We found an occasional pipistrelle roosting under the cladding, with pipistrelle activity logged on the statics, but otherwise all was quiet.

Thankfully COVID-19 didn’t stop play
Throughout March, restrictive measures were put in place to ensure staff health and safety, as well as to prepare for a possible shutdown, including the removal of the site cabin. Risks were assessed on a daily basis with reference to Government and WYG Group advice. With no overnight stays possible, we travelled from home directly to the site and back again in the wee hours, starting checks earlier to avoid contact with any other staff – our schedules were amended to ensure we had sufficient rest between journeys. The early morning dawns were a blessing as the clocks hadn’t yet gone forward, so we had daylight and almost empty roads. We took precautionary measures when refuelling cars and took packed lunches to minimise unnecessary stops for supplies and, of course, we practised good social distancing when on site.

Despite the best efforts of the barbastelle bats and the restrictions that were brought in during March, the underpinning was completed before the 27 March deadline, agreed in the licence. This was thanks to continued communication between us and the rest of the project team, and the underpinning contractors throughout the six-week period. The roost is still there for barbastelles, unchanged, so we hope that they will return soon.

The next steps are to complete summer monitoring to confirm continuation of breeding activity on site and to assess the colony size, followed by further repair works to the windows and doors in the autumn once the maternity period is over. But right now, it’s time for a well-earned rest!

Despite the current situation, WYG is still able to support clients needing bat surveys and mitigation provided the site allows us to comply with government guidance regarding social distancing. So, if your site needs assessment for bats then give our bat team a call.

We can also provide environmental de-risking services to significantly reduce project uncertainty while tenders and projects may be paused. To discuss any of the above please contact ecology@wyg.com

About the authors: Laura Holmes and Elizabeth Sanders are both highly experienced bat specialists who have worked with most UK bat species and hold numerous mitigation licences including rarer species and complex buildings. They have worked on a variety of sites to assess for roosting, foraging and commuting bats using active and passive survey methods plus advanced survey techniques such as mist netting where needed. They are both registered consultant under the Bat Mitigation Class Licence scheme. Laura spends her spare time participating in research projects both in the UK and Greece, for which she traps and radio tracks bats under licence.