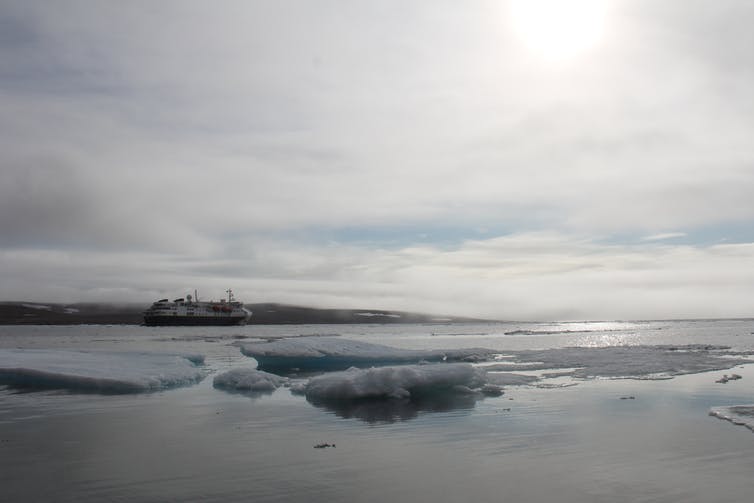 When people who haven’t been to the Arctic think of this remote and cold region, they may picture animals, such as polar bears, narwhal or ringed seals, and the people who live there. Rarely does this vision include modern cargo ships and ocean liners.

Yet these large vessels are increasing their activity in the Arctic Ocean as declining sea ice opens previously inaccessible Arctic regions to shipping. This surge in vessel traffic is also causing an increase in underwater noise, which research has shown can affect marine mammals and fish by interfering with communications, behaviour and movement.

Our new study shows that Arctic cod, a key fish in this ecosystem, are also sensitive to ship noise. Such sensitivity may affect their well-being and the predators that feed on them.

Most fish and marine mammals can hear sound, which they use to communicate, forage, detect approaching predators and locate prey. Noise in the environment can impede all of these functions, and this can have negative short- or long-term implications for the health of aquatic organisms.

For example, noise-induced temporary hearing loss and an increase in stress hormones have been observed in fish. The former can lead to death due to inability to hear approaching predators. Masked communication can also lead to loss of critical mating opportunities.

Some Arctic communities have raised concerns about the effect increasing ship traffic might have on aquatic animals, particularly marine mammals that are an important source of food and livelihood. They also worried that the noise might be pushing the Arctic cod into new areas, followed by marine mammals.

We carried out a study in Resolute Bay, Nunavut, to measure how ship noise might be changing the behaviour of Arctic cod, an abundant small fish that is a key prey for seals, whales and seabirds.

We used acoustic telemetry to track 77 individual Arctic cod. We found they moved to areas with less noise when cargo ships and cruise ships were present in the bay, whether they were anchored or moving.

Cod form schools, so we assumed that the fish we were tracking represented the population living in Resolute Bay. When ship activity was low (a single ship), the cod moved 250-350 metres away.

We would expect the displacement to be larger with more ship activity. In recent years, two ships are commonly seen in the bay at once. There has also been a sharp increase in the traffic through the Parry Channel — the main passage running through Lancaster Sound — over the past decade.

Any shift, whether short- or long-term, in the distribution of an animal’s population has implications for that species and for the predators that rely on them. As the primary food source of seabirds and marine mammals, a shift in Arctic cod distribution has consequences for the marine food webs, as well as for the Indigenous communities that depend on them.

Summer is a short but critical period in the Arctic. Fish, birds and marine mammals feed prolifically in open waters when prey is more abundant. The warmer temperatures also allow animals to grow faster and accumulate more body fat.

We found Arctic cod changed their swimming behaviour when ships were present, spending less time searching for and consuming food, and more time travelling, which is associated with higher speeds and thus, more energy use.

But if ship traffic occurs in an important feeding area for Arctic cod, the fish may find themselves missing meals and using more energy for travel. This could have significant negative effects. For example, it may lead to lower body weight or reduced winter survival due to lower fat reserves.

Ship traffic in Arctic Canada has already doubled over the past 20 years, and the number of days ships spend in the Arctic has nearly quadrupled since 2000. This trend is also seen elsewhere in the Arctic and is projected to continue. The Northwest Passage, a sea route through the Canadian Arctic Archipelago, has long been eyed for shipping to Asia from North America and Europe. As vessel traffic grows, underwater noise will also continue to increase.

Underwater ship noise is a new disturbance to Arctic marine animals. Although fish from temperate regions have shown the ability to adapt to noise, Arctic organisms may not have enough time to adjust.

The effects of climate change are greatest at the poles and the organisms there already face many stressors. The Arctic ecosystem also has lower species diversity compared with temperate and tropical climates, reducing its resilience to stress.

Although Canada, Europe and the United States broadly support environmental protection, human health and sustainable management of anthropogenic disturbances, such as ship traffic and noise, we need to develop and implement effective conservation and management plans.

We need Indigenous people to be involved in decision-making processes, marine protected areas that protect important foraging and breeding grounds, strict rules on ship speed and their distance from sensitive regions, as well as technologies that lower vessel noise, such as modified propellers and regular cleanings.

The precautionary principle in environmental decision-making suggests we should take preventive action in the face of uncertainty. For the Arctic, uncertainty is associated to the response of biology in the oceans and on land and its magnitude. We believe that preventive timely action is of the essence.