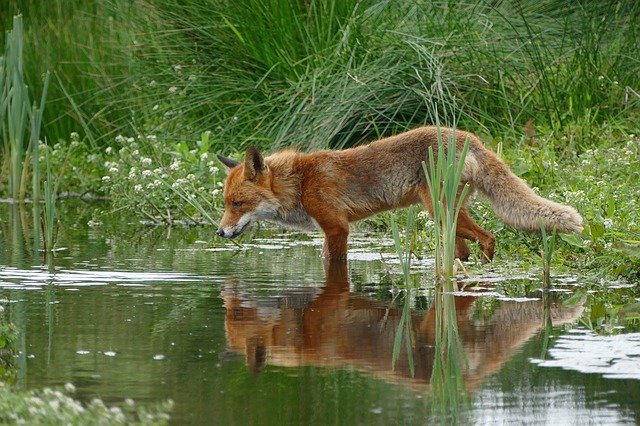 Researchers from the Leibniz Institute for Zoo and Wildlife Research (Leibniz-IZW) and the Luxembourg National Museum of Natural History (NMNH) analysed genetic material of red foxes (Vulpes vulpes) inhabiting Berlin and its surroundings. They identified two genetically distinct, adjacent “urban” and “rural” fox populations and revealed that physical barriers such as rivers or man-made structures reduce the exchange between these populations but also differences in human activity in these landscapes play a major role. The researchers suggest that avoidance of sites of human activity may drive foxes into costly trade-offs as they prefer to disperse along potentially dangerous transportation infrastructures. The study was recently published in the scientific journal Molecular Ecology.

The red fox is a physically highly mobile and ecologically opportunistic omnivore, successfully adjusting to very different and dynamic environments. Cities are an attractive novel habitat for red foxes as they offer an abundance of food with an apparently reduced predation risk. Red foxes were first recorded in Berlin in the 1950s, and by the 1990s they were distributed across the entire city. Using the example of urban Berlin and neighbouring rural Brandenburg, the scientists analysed the genetic make-up of red foxes inhabiting the urban and adjacent rural areas based on material collected from more than 370 red foxes from both areas. They identified two genetically distinct clusters, broadly coinciding with the areas of urban conurbation and the adjacent rural countryside.

The researchers also studied the factors limiting the gene flow between both populations. Landscape barriers such as large rivers and water bodies prevented foxes to some extent from mixing but were insufficient to explain maintenance of genetic differentiation and population structure. “The boundary between adjacent urban and rural areas, which is particularly characterised by increased human activity as well as denser housing, was a key factor”, Sophia Kimmig, lead author of the study explains.

The results of the study showed that Berlin foxes should be considered to be living on an ‘urban island’ because of differences in behavioural responses of ‘city’ and ‘country’ foxes to human activity: foxes from the city population are bolder than their relatives from the countryside, who are reluctant to cross the border into the city. Although ‘Berlin’ foxes are more courageous in that they cope better with human activities (‘city life’), they still prefer to use accident-prone motorways and railway lines – areas of little human pedestrian activity – to disperse within the city than taking potentially safer but busier public paths.

People have hunted foxes for times immemorial. Even nowadays, fox hunting remains a legalised ‘recreational’ activity in several countries. The scientists argue that this may have exerted sufficient selection pressures on foxes to be wary of people, encouraging a preference for avoiding people and sites of centres of human activity. Such a risk management might explain why ‘country’ foxes only rarely venture across the rural-urban boundary, and why urban foxes chose to face the real risk of being hit by a train or a car and avoid sites of increased human activity.