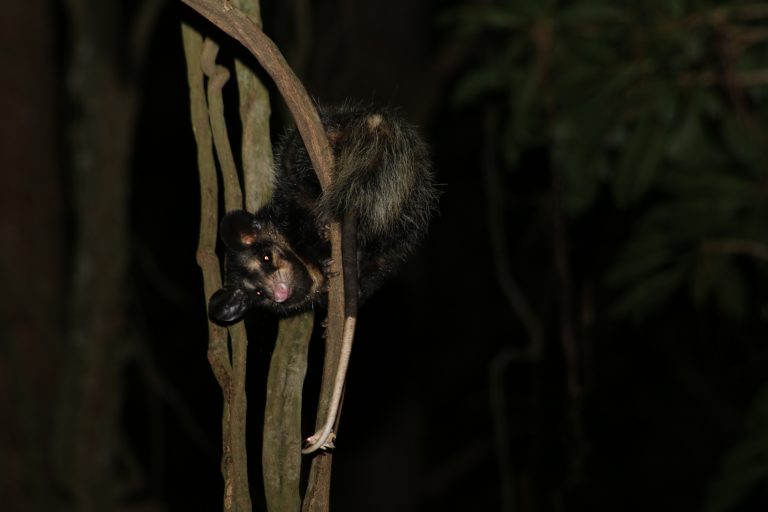 In Brazil there is a plant so strange that researchers predicted – and 27 years later, proved – that opossums are key to its pollination. The findings are published in the Ecological Society of America’s journal Ecology.

The plant Scybalium fungiforme, a little-known fungus-like species of the family Balanophoraceae, has bunches of tiny pale flowers that are surrounded and housed by a hard surface of bracts – like on an artichoke. Because of their scale-like shape, the bracts must be opened or peeled back to expose the flowers and nectar to pollinators such as bees.

While most species in the Balanophoraceae plant family are primarily pollinated by bees and wasps, researchers at São Paulo State University in Botucatu, Brazil hypothesised something different. They thought that opossums, with their opposable thumbs, would be a key pollinator for S. fungiforme due to the challenging bracts covering the flowers.

In the early 1990s Patrícia Morellato, a professor at the university, first made the prediction. She and her colleagues studied the plant and they captured an opossum with nectar on its nose. Their observations went unpublished because they did not record or obtain direct evidence of the opossums pollinating the flowers.

Felipe Amorim, assistant professor at the university and lead author on this study, did not encounter the plant until 2017, but hypothesised that a non-flying mammal is needed for pollination based on the flower morphology. In April 2019 his students independently hypothesised that perhaps rodents could act as the main pollinators of this species. “At that time, neither of us knew anything about the unpublished observations made by Patrícia in the ‘90s,’” he explains.

In May 2019 Amorim and a team of researchers went to Serra do Japi Biological Reserve, located about 50 km from the area studied by Morellato, and set up night-vision cameras to record the activity of nocturnal flower visitors. The cameras captured opossums removing bracts from the fungus-like plant and pushing their faces into the flowers to eat the nectar. It was the first direct evidence of opossums pollinating the plant.

Amorim sent his colleague Morellato the footage. “When she watched the videos,” he says, “she sent me a voice message as excited as we were when we first saw the opossum visiting the flowers, because it was the first time she saw something she predicted two and a half-decades ago!”

The researchers had made the opossum prediction based on “pollination syndrome” – the concept that floral attributes such as colour, morphology, scent, and size reflect the adaptation of a plant species to pollination by a certain group of animals. Opossums, having “hands” with opposable thumbs, are capable of peeling back the scale-like leafs covering the flowers of S. fungiforme. The plant does have other floral visitors that act as secondary pollinators once the bracts are removed – bees and wasps dominate the crowd, but a surprising additional visitor was several hummingbirds.

“Based on the flower morphology,” Amorim says, “Morellato, my students, and I could safely predict that this plant should be pollinated by non-flying mammals, but the occurrence of hummingbirds coming to the ground to visit these flowers was something completely unexpected to me.” Morellato had not seen any hummingbirds visiting this species at her study site during the ‘90s, but researchers have more recently obtained indirect evidence that hummingbirds visit the plant in both study locations.

The authors hope to continue studying the pollinators of S. fungiforme to assess the efficiency of each group of flower visitor (mammals, hummingbirds, and bees and wasps) in order to quantify their contribution to the fruit production of this plant. They also want to analyse the chemical compounds of nectar and floral scent, which can reveal much about the adaptation of a plant for a given group of pollinator.

Overall, the story is an interesting one to tell, the culmination of nearly three decades of prediction and observation based on the hard shell surrounding a bunch of tiny flowers. Amorim contemplates that “at the time that non-flying mammals were first predicted as the pollinators of this fungus-like plant, I was about 11 years old, and most of the authors of this study haven’t even had born!”