Home » Near caves and mines, corrugated pipes may interfere with bat echolocation 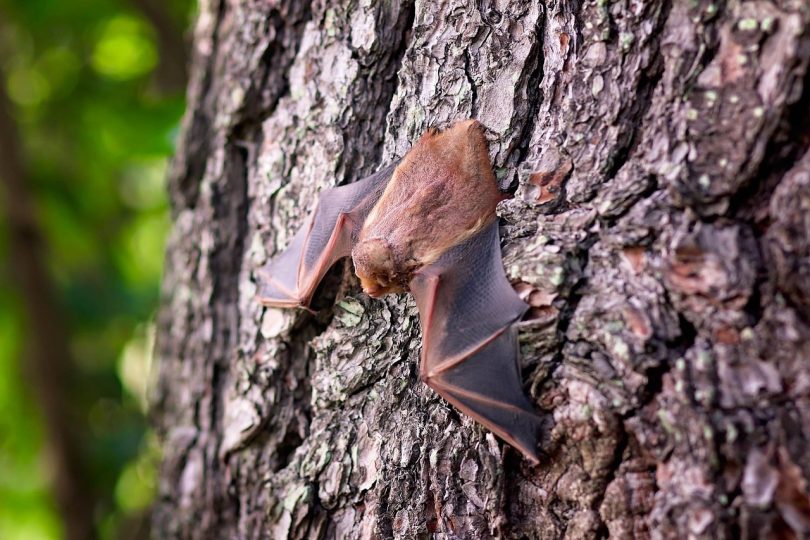 Corrugated metal pipes have been installed at cave and mine entrances to help bats access their roosts, but a new study from Brown University researchers suggests that these pipes may actually deter bats.

When entrances to caves and mines — essential roosting places for bats — are blocked to prevent people from going inside, the gates often include a pipe to allow bats to access their roosts. However, many of the pipes have been constructed with corrugated rings for added strength.

Through field observations, biologist Patricia E. Brown discovered that some bat species will abandon roosts with entrances constructed with these corrugated rings. Now, new research helps to explain why — the corrugations create unusual acoustic effects that interfere with bats’ echolocation and prevent them from navigating properly.

“From a conservation point of view, anything that interferes with the use of individual roosts by bats, particularly species whose populations are threatened, deserves attention to see if it might be mitigated,” said James Simmons, a Brown University professor of biology and lead author of the new study published in Scientific Reports this month.

In the study, bats attempted to navigate through two different scenarios in a custom-built flight room: a narrow corridor surrounded by vertically hanging plastic chains to model vegetation, and a tunnel of round plastic hula hoops to model the pattern of raised rings along a corrugated pipe.

The bats were able to successfully navigate through the chain corridor 99 percent of the time, but their success rate dropped to 49 percent when they flew through the hoop tunnel. Flights were considered failures when the bats collided with a chain or hoop, or when they exited the tunnel prior to reaching the end.

The researchers also compared the bats’ echolocation patterns during the flights through the hoop tunnel and chain corridor. Past research indicates that bats emit different timing patterns of their sonar sounds when they perform difficult tasks compared to simpler tasks, and this was also the case for the bats in the study. For example, during their flights through the hoop tunnel, the bats emitted more rapid sound pulses, which suggests that the hoop tunnel was cognitively more challenging for them.

Taken together, the results indicate that spaces containing raised rings, like hoops and corrugations, create significant difficulties for bats. This is likely because sound bounces off the rings in confusing ways, which creates the illusion that obstacles are always present in the tunnel, just in front of the bat. These “phantom objects” cause the bats to become disoriented, as they’re unable to perceive that the path ahead is clear.

Two of the four bats in the study were able to navigate more effectively through the hoop tunnel with practice, which suggests that raised rings may impair the navigational abilities of some individuals more than others, and that abilities may improve over time.

Going forward, resource managers could try addressing this issue by spraying concrete over the corrugations inside pipes, thereby reducing acoustic distortions and allowing bats to navigate more easily. However, the researchers said further research must be done to explore this issue.

“The corrugations in pipes are similar to the hoops but not identical,” Simmons said. “Getting a significant length of corrugated pipe into our flight room is challenging, so one of the next steps might be to survey yet more mines and caves with corrugated pipe entrances to see how commonly they’re abandoned by bats. The other step is to find a colony of bats in a mine and give them two entrances — with corrugated and smooth pipes — to see if they prefer one to the other. Some of the mines already studied have multiple entrances with different types of gates, and this comparison originally prompted our experiments with the hoops.”

Study co-author Patricia E. Brown is a field biologist in California who has long studied roosting patterns of bats in mines and caves. In addition to Simmons, other Brown University authors on the study were Carlos E. Vargas-Irwin and Andrea M. Simmons.