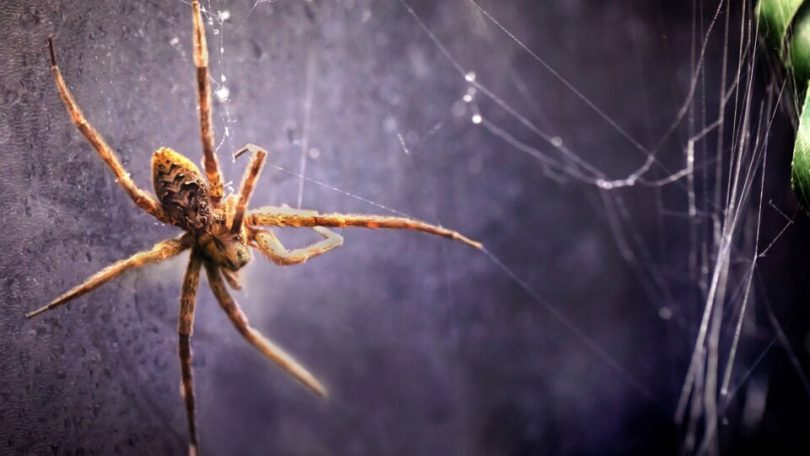 From sea shores to salt flats, a high incidence of spiders spin a life in or around water. Researchers at the California Academy of Sciences and William Paterson University found that nearly one fifth of all spider families are associated with saltwater or freshwater aquatic habitats. Their findings—recently published in the Zoological Journal of the Linnean Society and aptly titled “The Life Aquatic with Spiders”—address the common misconception that all spiders dwell on land, and reveal surprising evolutionary pathways of this group from a land-based existence back to a water-based existence.

“This study shines a light on what was previously a dark corner of the spider tree of life,” says senior author Lauren Esposito, PhD, the Academy’s Curator of Arachnology. “It’s the most extensive literature review of aquatic spiders to date—we were blown away by the extent that spiders have evolved to interact with aquatic habitat.”

Illuminating “The Life Aquatic with Spiders”

To catalogue these water-dwelling spiders, the team first consulted years of prior research led by Academy colleagues. A spider group known as Dictynidae caught their attention: Although known to contain remarkable diversity of aquatic spiders from around the globe, the group presented tangled species relationships. Using DNA analysis, the team carefully studied and sorted specimens, flagging instances where a species evolved a full or partial association with water. Of 120 spider families across the tree of life, they found that members of 21 families exhibited an affinity for aquatic habitat. This group represents nearly one fifth of all spider families known to science.

“We’re grateful for the collaborative spirit of our colleagues, whose prior research laid the groundwork for our team,” says lead author Sarah Crews, PhD and an Academy researcher. “Not only were we fascinated by the Dictynidae group’s unique ecology and remarkable diversity, we also realised no one has ever given them a closer look.”

While some aquatic spider species share a common ancestor, the co-authors concluded that most are distant cousins with superficially similar traits—a phenomenon known as convergent evolution. Knowing the group lacked a single evolutionary origin, the study team set out to compile an “atlas of characteristics” to see if certain traits give spiders a leg up (or eight) when thriving in harsh, watery worlds.

Consider the Maningrida diving tarantulas of Australia’s Northern Territory, which sport dense hairs that repel water and keep (all four of) their lungs dry. When heavy rains arrive, the spiders retreat into waterproof burrows—if flooded, they can hunker down in an armour of air bubbles and withstand up to six hours of full submersion. In freshwater habitats across the globe, fishing spiders utilise the water’s surface as an extension of their sensory system: Each ripple alerts of an approaching fishy meal. And in hot, parched pockets of the evaporated Salton Sea, the salt flat spider thrives in the freshwater that pools between gaping cracks and saline crusts. The only truly aquatic spider—the diving bell spider of Europe and Asia—spins a submerged silken web that it inflates like a balloon by dragging air bubbles down from the surface.

“We found that many adaptations are widespread across water-dwelling spider species, while other water-dwelling spiders lack these favourable characteristics entirely,” says Esposito. “We were surprised to find that these traits—although certainly helpful—are not a prerequisite to being able to withstand a life submerged in water.”

The ancestors of spiders—and all terrestrial life—originated in the ocean.

“We know that spiders have aquatic origins,” says Crews. “So in some ways, it comes as no surprise that they are predisposed to coping with full or partial submersion in water.”

What’s puzzling is the evolutionary steps that Dictynidae spiders took to arrive back at their aquatic lifestyle.

“They didn’t follow the evolutionary steps we expected them to,” says Esposito. “Every time we identified a saltwater spider species, its closest relative was living on land, rather than around freshwater. This tells us that perhaps spiders are pre-adapted to live in various types of water habitat, and don’t need to take evolutionary baby steps from land to freshwater to saltwater.”

Esposito and Crews hope that future data collection will allow for a finer-scale analysis of how these spiders have evolved to navigate watery worlds.

“It’s been hypothesised that aquatic spiders have beneficial adaptations, like producing more silk or being better at regulating water for salt tolerance,” says Esposito. “With a deeper understanding of these broad evolutionary patterns, we hope to tease apart certain physiological characteristics and physical traits important for living in aquatic environments. These findings could have implications for technologies ranging from biomaterials derived from silk to agricultural crops designed with higher salinity tolerances.”

For now, the team will continue to explore and surface the life aquatic of spiders—one surprising find at a time.