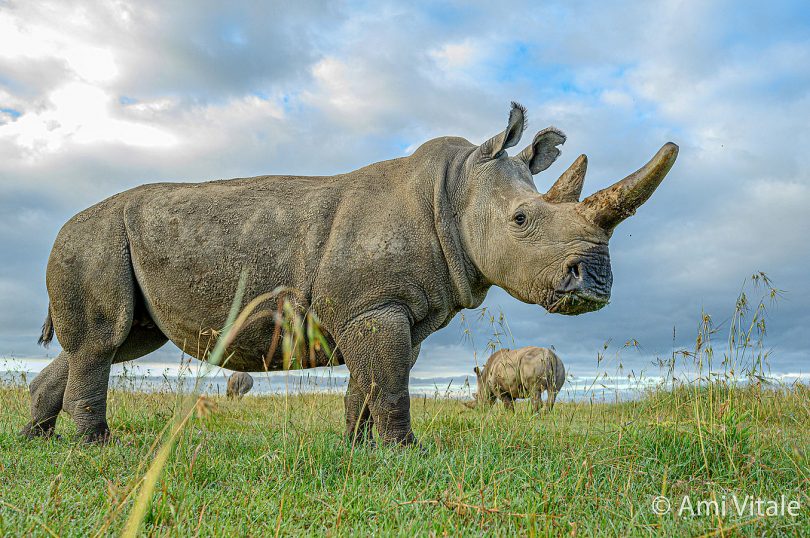 In December 2019 the team of scientists and conservationists repeated the egg collection from the northern white rhinos in Kenya and was able to create a new embryo over Christmas.

In August 2019 a team of scientists and conservationists broke new ground in saving the northern white rhinoceros from extinction. They harvested eggs from the two remaining females, artificially inseminated those using frozen sperm from deceased males and created two viable northern white rhino embryos. With great support from the Kenyan Government and in the presence of Hon Najib Balala, – Kenya’s Cabinet Secretary, Ministry of Tourism and Wildlife – the team repeated the procedure on December 17, 2019, and was able to create a new embryo over Christmas. This significantly increases the chances of successfully producing offspring. The procedure has proven to be safe and reproducible, and can be performed on a regular basis before the animals become too old. Preparations for the next steps of the northern white rhino rescue mission are underway.

Four months after the ground breaking first “ovum pickup” in August 2019, the team repeated the procedure with northern white rhinos Najin and Fatu on December 17, 2019, at Ol Pejeta Conservancy in Kenya. The animals were placed under general anaesthetic and nine immature egg cells (oocytes) – three from Najin and six from Fatu – were harvested from the animals’ ovaries using a probe guided by ultrasound. The anaesthesia and the ovum pickup went smoothly and without any complications. The oocytes were transported immediately to the Avantea Laboratory in Italy. After incubating and maturing nine eggs, four from Fatu and one from Najin were fertilised with sperm using a procedure called ICSI (Intra Cytoplasm Sperm Injection). One out of five eggs from Fatu fertilised with semen from Suni developed into a viable embryo with the help of Geri®, an innovative benchtop incubator with integrated continuous embryo monitoring capabilities designed to provide an individualised and undisturbed incubation environment, donated by Merck. The embryo is now stored in liquid nitrogen along with the two embryos from the first procedures.

Hon. Najib Balala, Cabinet Secretary for Kenya’s Ministry of Tourism and Wildlife
“As a government, we are glad that the northern white rhino in-vitro fertilisation project by a consortium of scientists and conservationists from Kenya, Czech Republic, Germany and Italy collaborative partnership has been able to successfully produce three pure northern white rhino embryos ready for implantation into southern white rhino as surrogate mothers in coming months. This is a big win for Kenya and its partners, as the northern white rhinos are faced with the threat of imminent extinction, where only two of them, females Najin and Fatu, are left in the whole world and are currently hosted by Kenya. It’s a delicate process, and for that, we thank the concerned parties, the Kenya Wildlife Service, Ol Pejeta Conservancy, Leibniz Institute for Zoo and Wildlife Research, Avantea Laboratory and Dvůr Králové Zoo, for putting in all of their efforts in ensuring that the critically endangered species do not disappear from the planet under our watch. I urge the scientists to continue digging deeper into technology and innovations to ensure that not only this concerned species does not go extinct, but other species that are faced with similar threats. The fact that Kenya is at the centre of this scientific breakthrough also makes me very proud. It’s amazing to see that we will be able to reverse the tragic loss of this subspecies through science.”

In December 2019, the team also transported the semen of Sudan, the last northern white rhino male that died in March 2018, from Kenya to Germany. The aim is to use it in future for production of more embryos. However, as the semen was collected in 2014 when Sudan was already over 40 years old, it is necessary to test it first and then see whether it could be used for such purposes.

The egg collection, embryo creation and preparation for the embryo transfer is a joint effort by the Leibniz Institute for Zoo and Wildlife Research (Leibniz-IZW), Avantea, Dvůr Králové Zoo, Ol Pejeta Conservancy and the Kenya Wildlife Service (KWS). The entire process is part of the “BioRescue” research. Its goal is to significantly advance assisted reproduction techniques (ART) and stem cell associated techniques (SCAT) complemented with a comprehensive ethical assessment carried out by the University of Padova for the benefit of the northern white rhinoceros. The consortium is partially funded by the German Federal Ministry of Education and Research (BMBF) and comprises of internationally renowned institutions from Germany, Italy, Czech Republic, Kenya, Japan and USA.