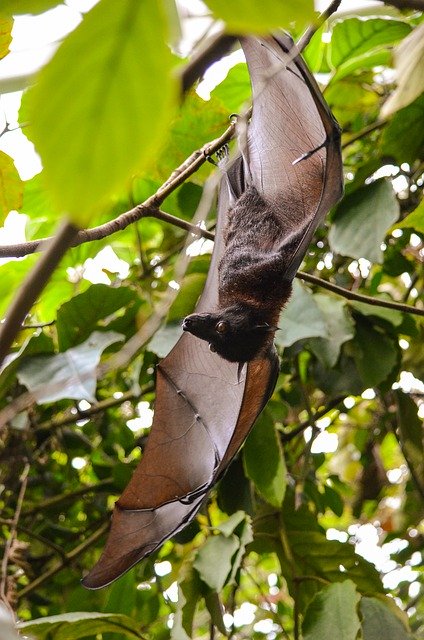 At a time when kombucha is commonplace on cafe menus and “probiotic-fortified” has become the newest health buzzword, our guts have never been more relevant. With good reason, humans have begun paying more attention to the bacteria living in our guts—our microbiomes. The microbiome helps fight disease and aid digestion, playing a pivotal role in many creatures’ wellbeing, from canines to primates to rodents. But for the first time—largely in part due to museum collections—scientists were able to compare the guts of mammals, birds, reptiles, and amphibians alike. It turns out that not all species rely so heavily on their gut microbiomes. In fact, birds and bats have oddly similar microbiomes, and neither appear to rely on them much. “Why?” you may ask: to accommodate their ability to fly, scientists think.

“If you’re carrying a lot of bacteria in your gut, it can be pretty heavy and may take resources away from you,” says Holly Lutz, a research associate at Chicago’s Field Museum and postdoctoral researcher at the University of California San Diego. “So if you’re an animal that has really high energetic demands, say because you’re flying, you may not be able to afford to carry all those bacteria around, and you may not be able to afford to feed them or deal with them.”

“When we first started this project, I thought that it would make sense that we’d see similar associations between animals and their gut microbes when the animals shared a similar diet. Our pie-in-the-sky idea was that flight could impose a similar type of selection on which microbes animals host. What was shocking was that we didn’t find that birds and bats share a similar microbiome per se, but rather that both lack a specific relationship with microbes,” says Se Jin Song, the study’s co-first author from UC San Diego.

To figure out the relationship between gut microbiomes and these vastly different species, Lutz and her colleagues got down and dirty: analysing the faecal samples of around 900 species of animals with a backbone—the first study of its kind to analyse both mammal and bird microbial diversity on a global-scale.

It was a large, collaborative effort, bringing together researchers, museum collections, and zoo directors from around the world. Like something you’d see in an Indiana Jones movie, Lutz ventured into the dark bowels of remote Ugandan and Kenyan caves with a flashlight in tow and scrambled up rocky walls to collect samples from African bats.

Once all the samples were gathered, scientists used high throughput genetic sequencing to process them. DNA was extracted from individual cells using specialised detergent and filtration methods, after which scientists could target a specific gene common to all bacteria in order to “barcode” bacterial communities present within each sample. By pooling samples from individual hosts—referred to as “libraries”—they were then able to sequence samples en masse and make the broad comparisons that formed the foundation of the study.

Scientists expected to see gut microbiomes line up according to the family trees of the animals in which they live. In general, animals that are closely related to each other have similar gut microbiomes, because they evolved together—a pattern referred to by scientists as phylosymbiosis

That’s why they were surprised to see that bats’ gut microbiomes had little in common with their fellow mammals. Bats’ gut microbiomes were actually more similar to birds than any other group. The takeaway? That in birds and bats, there’s little relationship between how closely related species are and how similar their microbiomes are.

The link between birds and bats isn’t in their ancestry, but in their lifestyles. Birds and bats are vastly different and only distantly related, but they both independently evolved the ability to fly. Lutz has a hunch that birds’ and bats’ need to be light for flight changed their guts. Their intestinal tracts are much shorter than those of comparably-sized land mammals and carry far fewer bacteria — giving flying animals less stuff to haul around. There’s also the possibility that their guts aren’t providing the necessary food to bacteria to maintain the symbiotic (mutually beneficial) exchange that would make living there beneficial to bacteria.

In addition to having shorter guts and fewer bacteria, the bacteria that birds and bats do have tend to vary a lot. For all mammalian groups besides bats, there were visible patterns of specific bacteria found in closely-related groups. However, with birds and bats you see all types of individual bacteria scattered across almost haphazardly. “It’s almost like they’re just picking up whatever’s around them and they don’t really need their microbes to help them in ways that we do,” says Lutz.

Scientists hope that learning more about the nuances of other animals’ microbiomes can tell us more about our own. The species that don’t rely as much on their gut microbiomes can provide a particular insight. “If we ever are putting ourselves in some kind of extreme situation where we’re disrupting our microbiome, there is something that we can learn from animals that don’t need their microbiomes as much,” reflects Lutz.

Lutz notes that this discovery wouldn’t have been possible without museum collections from around the world. Specimens of bird and bat guts tucked away in cryogenic chambers filled with liquid nitrogen in the Field Museum’s Collections Resource Center were pulled out to help provide the broad samples needed for a study of this size.

“The scope of this paper—in terms of species that we sampled—is really remarkable. The diversity of collaborators that came together to make this study happen shows how much we can achieve when we reach out and have these big and inter-institutional collaborations,” says Lutz.