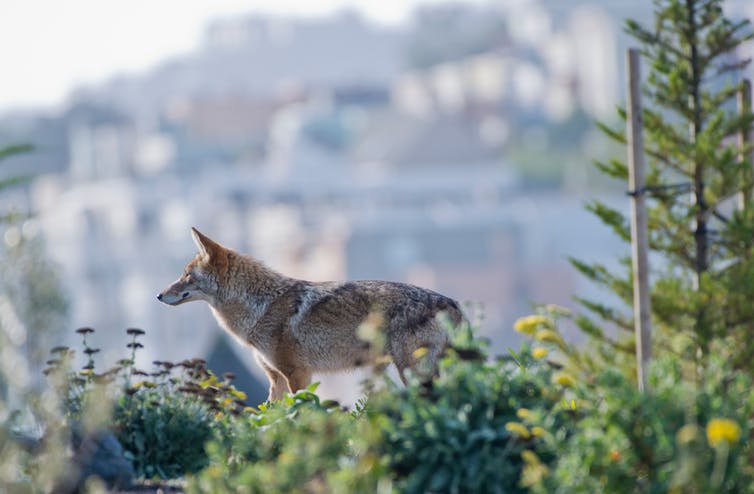 On Sept. 9, 2019, a mountain lion was found dead in the Santa Monica Mountains. It was the fifth mountain lion to die from consuming rat poison in that region since 2002.

While this may seem shocking, exposure to rodenticides — pesticides specifically designed to kill rodent pests — is increasingly common among predators because they sometimes feed on rodents that have consumed toxic baits. Because rodenticides are commonly applied in urban settings as a method of pest control, these exposures increase near urban areas.

In a study led by wildlife disease ecologist Maureen Murray and published in the journal Frontiers in Ecology and the Environment, we compiled and analysed the results of over 500 previously published health comparisons of urban and non-urban wildlife.

We found that overall, urban wildlife had poorer health than wildlife in more natural areas. This was mostly due to urban animals having more toxicants in their tissues.

Toxicants are toxic substances artificially introduced into the environment by human activity — for example, as a byproduct of mining — and include pesticides, industrial pollutants and heavy metals.

Higher toxicant loads in urban wildlife made sense to us: urban centres are known to have higher levels of pollution than rural areas. This is because pollutants are commonly associated with roads and industrial activity. It’s not always possible to pinpoint an exposure source, but a closer look at the health comparisons in our paper can be used to infer possible exposure routes.

For example, a study examining lead levels in kestrels in Spain found that urban and rural kestrels had lower lead levels after restrictions were placed on leaded gasoline. This suggests that pollution from leaded gasoline had been an important exposure source.

In another study that measured heavy metal concentrations in scallops in Chile, scallops collected at a site near an international shipping port had the highest concentrations of copper, lead and cadmium. This port has been used for loading metals since the 1940s, which is likely how the surrounding water was contaminated.

Although it is difficult to predict the consequences of elevated toxicant levels on wild animals at the individual or population level, we know that toxicants can potentially harm animals’ reproduction, development and survival.

Exposure to heavy metals has been found to weaken the immune system of tree swallows, possibly making animals more susceptible to disease or less able to recover from infection.

Another study demonstrated that exposing amphibians to pesticides increased their susceptibility to infection with a parasitic worm. Amphibian populations are in decline globally, in part due to disease, and so it is important to understand how toxicants influence disease to conserve threatened populations.

Increased toxicants in urban wildlife could also give us information about our own exposure to pollution. Pollution in cities is a concern for human health — over 80 per cent of people in urban areas are exposed to air pollution above guidelines set by the World Health Organisation. It’s possible to track how the air pollution in one urban area compares to others.

Toxicants were only one measure of health that we examined. For other health measures like stress, parasitism and body condition (like a BMI score), it was less clear whether urban animals had poorer health than non-urban animals. For example, white-footed tamarins living in the city were more likely to be overweight and have higher cholesterol levels, likely due to increased access to cholesterol-rich foods in cities. However, their rural counterparts had a greater incidence of parasites.

It’s important for scientists to assess wildlife health from multiple angles similar to how a doctor would evaluate various factors like diet, stress levels and sickness at a check-up.

Some species (like bears or mountain lions) are probably better suited to staying outside of cities. For these animals, it’s important to reduce food waste that attracts them into human-dominated areas. But for many other species, we should consider how to live alongside them in a way to keep them healthy.

Higher toxicant loads in urban wildlife suggests that we need to reduce their exposure. Effective mitigation will require the development and enforcement of government regulations.

But there are steps that individuals can take to support healthy wildlife. Before using toxic chemicals to control one animal species, consider how these chemicals could affect other species. For example, in March 2017 goldfinches died in a residential neighbourhood of Modesto, Calif., because they were poisoned by eating seeds contaminated with an insecticide that had been applied to nearby trees.

Individual actions to support wildlife could include refraining from using pesticides on your lawn or choosing snap-traps over rat poisons to control rodent pests in buildings. In turn, this could reduce accidental poisonings of pets and children.

Finally, there is a growing link between the value of interacting with nature and mental health. Beyond the importance of promoting wildlife health for biodiversity and preserving ecosystem services, an extra benefit of healthy wildlife is that their presence can improve our health too.

By 2050, 68 per cent of the world’s population is expected to reside in cities. Let’s take steps to ensure that wildlife can safely and healthily live alongside us too.