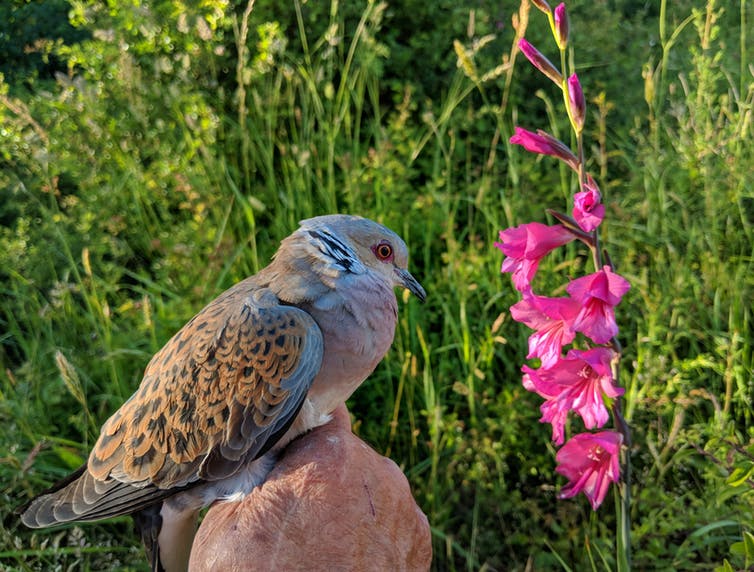 Turtle doves only eat seeds, and their first choice is weed seeds. Since the second world war, farming has drastically intensified across Europe and while this has also increased food production, it has decimated the food sources of turtle doves and other farmland birds, mammals and insects. Cutting back wild field margins, increasing herbicide use and sowing crops in autumn instead of spring have all contributed to the disappearance of wildflowers. With less of this habitat and food available, species are forced to feed more on easily accessible, man-made food sites, like stored or spilt grain on farms and garden bird feeders.

This has increased the risk of diseases spreading where birds congregate to feed. Just as diseases tend to spread on public transport, when large numbers of people come into close contact, the same is true for birds at garden feeders. Fewer wild sources of food are also blamed for the later arrival of turtle doves in Europe and their earlier migration to Africa, reducing their possible breeding time. Turtle doves can lay up to three clutches of eggs per season, but with less time to breed, they’re raising fewer chicks. As conservation scientists, we think this effect alone could explain most of the decline that’s been seen over the last 50 years.

But turtle doves are also killed by recreational hunters, and although they’re widely protected, hunting was permitted in ten EU countries as recently as 2018, with more than a million birds killed each year in France, Spain and Portugal, along the western migratory route which UK birds travel. Hunting at these levels is likely to prevent turtle dove populations from recovering, even with restrictions on the timing of hunting and the numbers of birds shot.

As migrants, turtle doves are threatened by what’s known as multiple jeopardy – they face challenges in African wintering grounds as well as in their European breeding grounds. Squeezed out of both habitats, migrant species tend to suffer more severe declines than their sedentary counterparts.

As a PhD candidate studying turtle doves, I’ve had the privilege of working with these beautiful birds in their natural habitat. I saw thousands of turtle doves leaving one prominent winter roosting site in Senegal – an amazing sight to behold, considering their rarity back in the UK. On a trip to Hungary, one of the only countries in Europe that’s home to a stable population of turtle doves, I heard them singing and saw pairs fluttering between trees. Having spent the majority of my time over the past two years reading about how poorly this species is faring, these moments were truly invigorating.

I’m hopeful that the work of Operation Turtle Dove, an effort by four UK conservation organisations, can counter the problems facing the species. This includes helping farmers look after wildlife by reintroducing uncropped field margins where the plants that doves like to eat can grow. Conservationists are also working closely with hunting organisations in Europe to ensure the activity is sustainable. They’ve already succeeded in reducing the hunting allowance in France.

Anybody can help by simply reporting a turtle dove sighting on the British Trust for Ornithology’s BirdTrack website. This can help target conservation efforts where they’ll have the greatest impact. Turtle dove-friendly habitats can sprout up in British gardens and parks too, encouraging the spring visitors to feed and nest. All it takes is planting the food species they like, such as fumitory and red and white clover, or allowing hedges to grow for the birds to nesting.

If people act now, they can safeguard the purr of spring in the British countryside, and make sure no one goes empty handed on the second day of Christmas.