Home » Birds are shrinking as the climate warms 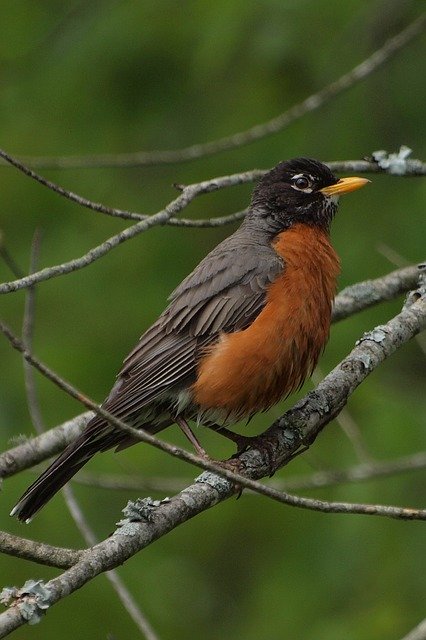 Every day in the spring and fall since 1978, scientists and volunteers at Chicago’s Field Museum have gotten up as early as 3:30 in the morning to collect fallen birds that have crashed into nearby buildings’ windows. One scientist, Dave Willard, has measured every single one of the dead birds and recorded the data by hand into a ledger. That meticulous note-keeping paid off: scientists analysed the data and learned that over the last forty years, migratory birds have been getting smaller—a change likely linked with climate change.

“When we began collecting the data analysed in this study, we were addressing a few simple questions about year-to-year and season-to-season variation in birds.  The phrase ‘climate change’ as a modern phenomenon was barely on the horizon.  The results of this study highlight how essential long-term data sets are for identifying and analysing trends caused by changes in our environment,” says Willard, a collections manager emeritus at the Field Museum and one of the authors of a new study in Ecology Letters presenting these findings, along with lead author Brian Weeks and senior author Ben Winger from the University of Michigan.

Every night during the spring and fall migration seasons, nocturnal birds making their way through Chicago run into the windows of big buildings. Many of the birds hit the hulking glass McCormick Place, North America’s largest convention centre. And since McCormick Place is just over a mile away from the Field, Willard headed down there one morning in 1978 to see what he could find.

“It started as a very casual study—someone mentioned that birds sometimes run into McCormick Place, and I was curious, so I went for a walk around the building one morning,” recalls Willard. “I found a couple dead birds and I brought them back to the museum—I’ve always wondered if there had been no birds that morning whether I would have ever bothered to go back.”

Over the years, Willard and volunteers with the Chicago Bird Collision Monitors collected over 100,000 birds that had hit McCormick Place and other buildings in downtown Chicago—they now make up 20% of the Field’s bird collections. Willard began to notice subtle changes in the birds’ measurements over time, but it wasn’t clear that statistically significant change was happening. “It’s a matter of millimetres, tenths of millimetres—it’s not something you know is happening until the analysis,” says Willard. The Ecology Letters study’s senior author, Ben Winger, began working on statistical analyses of the birds’ sizes when he was still a University of Chicago graduate student working at the Field Museum; now, he’s an assistant professor of ecology and evolutionary biology at the University of Michigan and an assistant curator at the U-M Museum of Zoology.

The team analysed the measurements of 70,716 bird specimens representing 52 species; they found that the sizes of all of these species declined between 1978 and 2016. The birds’ body masses, lower leg bone lengths, and overall body sizes all went down—the leg bone length decreased by 2.4% across species. Meanwhile, the birds’ wingspans increased by 1.3%. The researchers suspect that these changes in body size are related to climate change.

Animals’ body sizes are often tied to the climate they live in—within a species, individuals that live in cold climates tend to be bigger than their counterparts in warmer areas. This trend, called Bergmann’s rule, helps animals in cold places stay warm. Since temperatures have crept up in the last forty years in the birds’ summer breeding grounds north of Chicago, the researchers believe that the incredible shrinking birds might be due to climate change. Smaller bodies hold on to less heat; meanwhile, the birds’ wingspans may have increased so that the birds are still able to make their long migrations, even with smaller bodies to produce the energy needed for flight.

“We had good reason to expect that increasing temperatures would lead to reductions in body size, based on previous studies. The thing that was shocking was how consistent it was. I was incredibly surprised that all of these species are responding in such similar ways,” says the study’s lead author, Brian Weeks, an assistant professor at the University of Michigan School for Environment and Sustainability.

“Periods of rapid warming are followed really closely by periods of decline in body size, and vice versa,” Weeks says. “Being able to show that kind of detail in a morphological study is unique to our paper, as far as I know, and it’s entirely due to the quality of the dataset that David Willard generated.”

“It’s really been a herculean effort on the part of Dave and others at the Field Museum, including co-author Mary Hennen, to get such valuable data from birds that might otherwise have been discarded after they died from building collisions,” Winger adds.

Willard, however, turns praise back on Winger and Weeks: “I want to celebrate that there was someone out there who saw the dataset’s value and was willing to do the work to see if it had anything to say or not.”