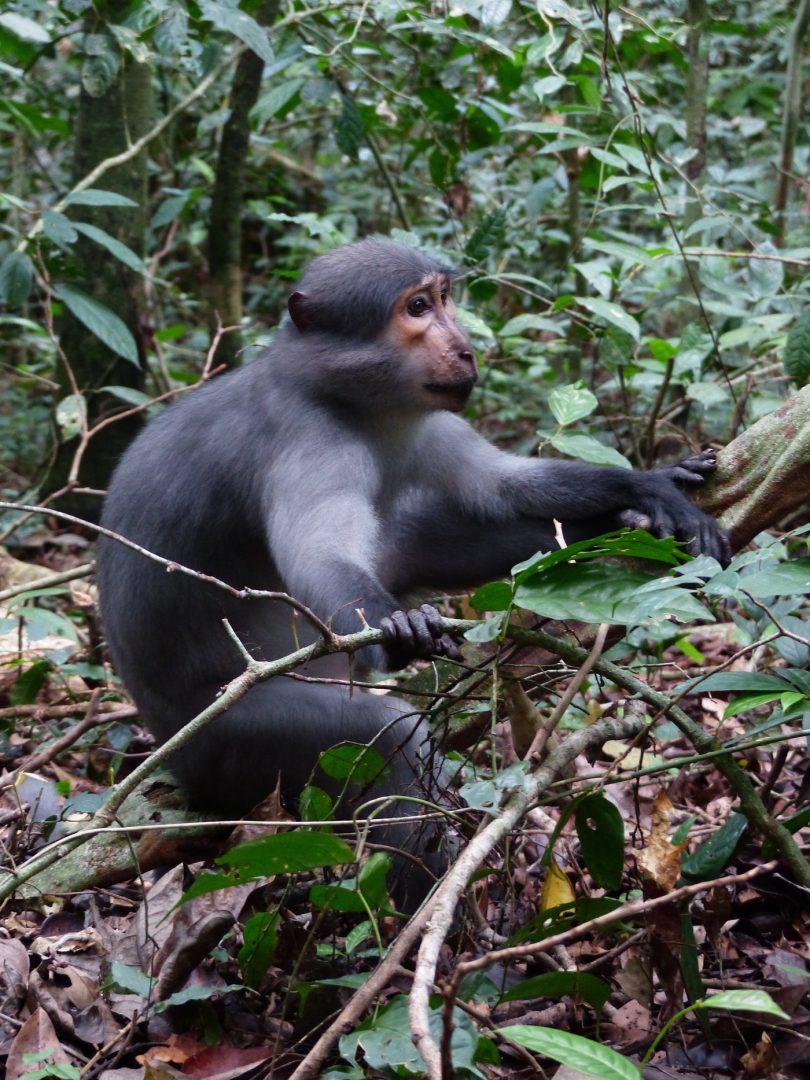 Humans are often faced with the choice of investing in the greater good or being selfish and letting others do the work. Animals that live in groups often encounter threats, and informing others could potentially save lives. Researchers from the Max Planck Institute for Evolutionary Anthropology in Leipzig, Germany, show that wild sooty mangabeys, when facing dangerous vipers, do not just call out of fear or to warn their family, but will call when the information about the threat might otherwise not reach all group members.

Cooperation – working together or exchanging services for the benefit of everyone involved – is a vital part of human life and contributes to our success as a species. Often, rather than helping specific others, we work for the good of the community, because this helps our friends and family who are part of the group, or because we share in the benefits with everyone else. However, even though the whole group can benefit when people work together, not everyone might be willing to contribute equally. One way for humans to cooperate is by exchanging information: from gossiping and storytelling to teaching and news reporting, we rely on some individuals possessing knowledge and sharing this knowledge for the greater good.

Like humans, many non-human primates live in close-knit social groups where individuals cooperate to their mutual benefit. As in our own species, information can be an important commodity for them: primates use a variety of calls to let each other know where they are going and whether they have found food. One of the most important messages to transmit is the presence of a threat: whenever a leopard or eagle has been spotted, calling for backup can help confuse predators or fight them off. While these calls help others in the group, they also clearly benefit the caller. This is different when the threat remains in one spot: many snakes, especially vipers, do not seem to actively hunt monkeys, but if stepped on, they can still bite and kill. However, once a monkey knows where the snake is, she herself is usually safe; giving a loud call to tell everyone about the snake costs time, and potentially exposes her to other dangers. Hence not all monkeys in a group will call out. So, why do some individuals call when they detect a threat that is not dangerous to themselves anymore?

Researchers from the Max Planck Institute for Evolutionary Anthropology in Leipzig, Germany, made use of the reaction of sooty mangabeys to snakes to understand how this monkey species cooperates by sharing information. Mangabeys live in the tropical Taï National Park, Côte d’Ivoire, in large groups (often consisting of more than 100 members), where individuals often cannot see everything that is happening to other group members, including their kin and friends. While mangabeys often find venomous snakes in the forest, it is hard to predict and film these encounters, so the researchers created realistic snake models out of mesh and paper-mâché and hid them where the mangabeys would pass. By filming the reaction of all the monkeys that would see the snake, the team could identify who called, when, and how often. This way, they hoped to understand whether monkeys called simply because they were scared of the snake, to show off how fearless they are, to warn their friends and family, or whether they share information widely across the group when it was likely that others who followed them did not know about the threat.

Over the course of a year, the researchers worked with a wild mangabey community within the context of the Taï Chimpanzee Project, conducting two to four experiments per month. Using snake models and up to five different camera angles, they were able to get detailed recordings of the behaviour of each mangabey that came close enough to see the snake. All group members are used to human observers and cameras, and their family ties, friendships, and dominance relations are known, enabling the researchers to analyse in detail whether the presence and arrival of specific group members would prompt alarm calls. Typically, after monkeys find a snake, they will stick around and observe it for a time, while other individuals follow them and also inspect the snake. Between the first and last individual to encounter the threat, there is a line of monkeys that could call; however, not all of them do, and the question is whether the ones that call differ from the ones that do not.

“What surprised us, in both natural snake encounters and in our experiments, was how different individuals reacted to the threat: most individuals did not show strong reactions unless they almost stepped on the snake, and they would usually just call once or twice and then move on. On the other hand, we had a small number of individuals who called almost every time they saw a snake”, says Alex Mielke, lead author of the study. “When we look at all experiments, though, a clear pattern emerges: mangabeys did not call specifically for their kin or friends, or ignorant group members. Individuals called when few others were around the snake or nobody had called in a while, effectively broadcasting the location of the snake to the general public when there is a chance that the information gets lost. This creates a system where no individual has to invest too much – one or two calls are enough before moving on – but because the threat is regularly re-advertised, the danger for following individuals is removed.”

These results showcase how the social system an animal lives in changes how information needs to be transmitted: In mangabeys, groups are large but all group members travel together, so an individual in the front of the group who spots a snake and calls out can probably assume that their sister in the back of the group will also get the message. The information gets re-iterated by those between them. In chimpanzees, where the community splits into subgroups while moving around, the same research group in Leipzig could show that individuals wait close to the snake and inform arriving group members who are potentially ignorant of the danger.

The behaviour of the mangabeys also illuminates how cooperation could have evolved in a group-setting. Even though the monkeys do not individually warn their kin and allies, if they find a snake and pass this information on to the rest of the group they can rely on others to contribute the same way, so that all group members (including family) are informed and hence less likely to get injured or killed by the snake. Similar mechanisms can be important in other situations where primates work together to achieve a goal, when defending their territory or acquiring food together. This study thus further illuminates the extent to which cooperation shapes social behaviour in our primate cousins.