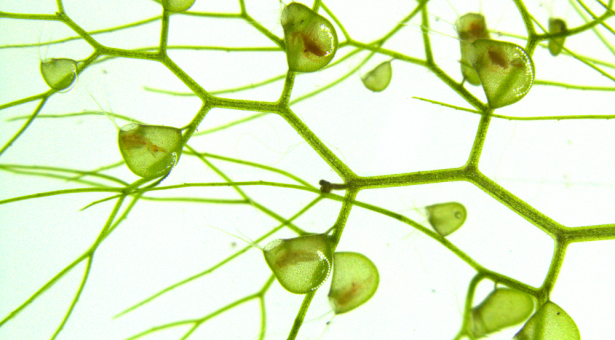 The secret recipe nature uses to make the diverse leaf shapes we see everywhere around us has been revealed in research.

The discovery comes in a study of the carnivorous plant Utricularia gibba (bladderwort) which has evolved unusual cup-shaped leaves with trap-doors to catch prey.

The team from the John Innes Centre has been investigating the aquatic plants as a model to understand the general principles by which plants produce their leaves.

In this study they discovered that simple shifts in gene activity in the leaf bud provide a flexible mechanism for how leaves of all shapes and sizes are made.

“We’ve discovered a general principle by which leaves from flat sheets to needle-like and curved shapes are formed,” says Professor Enrico Coen of the John Innes Centre.

“We found that the complex leaf shapes of carnivorous plants evolved from species with flat leaves through simple shifts in gene activity in the leaf bud. What surprised us is that how such a simple mechanism could underlie such a wide diversity of leaf shapes.”

Previous research by Professor Coen’s lab had identified a polarity field – a kind of inbuilt cellular compass – which orients growth and shaping of the leaf from a sheet of cells.

Here, in a study which appears in the journal Science, they used molecular genetic analysis and computer modelling to show how the cellular sheet is formed in the first place, identifying a second polarity field and the domains of gene activity involved in setting it up.

Each Utricularia gibba leaf consists of several needle-like leaflets together with a trap. Their analysis showed that trap initiation and development was dependent on gene activity being restricted to a small region. Without the restrictions traps failed to develop and only needle-like leaflets form.

The study presents a model in which such shifts in gene activity establish a polarity field which orients tissue growth. Together it offers a simple mechanistic explanation of diverse leaf forms and accounts for how cup shaped leaves evolved from flat leaves.

Most leaves are flat to harvest light for photosynthesis. So why study these strange cup-shaped exceptions to the rule when you are looking to find the general principles of leaf making?

“If you want to understand why water boils at 100oC, look for situations in which it doesn’t, like the top of Mount Everest where it boils at 70oC. From that we learn the general principle that boiling point depends on air pressure.  Similarly, if you want to understand why most leaves are flat, you might study exceptions, like the leaves of some carnivorous plants which form pitchers to trap prey,” explains Professor Coen.

Leaf flatness is important for how plants harvest light, providing energy and food that sustains life on the planet. By understanding the principles of leaf formation scientists and plant breeders may be able to develop more sustainable crops.

The study: ‘Evolution of carnivorous traps from planar leaves through simple shifts in gene expression‘, appears in Science.